MANILA — HB 1483 has certainly made efforts to provide for a legal definition to the ‘invisible’, as well as lay down what constitutes sexual orientation and gender identity. 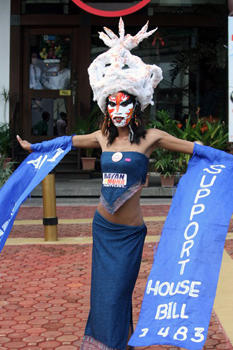 The Philippine LGBT community supports the passage of HB 1483 but insists that they do not want nor claim additional “special” or “additional rights.” Photo taken during the Gay Pride March in Manila, December 2010. (Photo by Raymund B. Villanueva / bulatlat.com)

Gender identity, in the meantime, is referred to in the bill as “the personal sense of identity as characterized, among others, by manners of clothing, inclinations, and behavior in relation to masculine or feminine conventions.” A person may have a male or female identity with the physiological characteristics of the opposite sex.

Finally, the legal definition of discrimination against individual’s Sogi: discrimination implies ” any distinction, exclusion, restriction, or preference which is based on any ground such as sex, sexual orientation, gender identity, whether actual or perceived and which has the purpose or effect of nullifying or impairing the recognition, enjoyment, or exercise by all persons of an equal footing of all rights and freedoms.”

Atadero said that these definitions, if approved and passed into law, will give LGBTs better legal leverage to defend their rights.

Among the discriminatory practices defined and penalized in the Bayan Muna LGBT bill include the denial of access to public service, including military service, to any person on the basis of Sogi; the inclusion of Sogi, as well as the disclosure of sexual orientation, in the criteria for hiring, promotion and dismissal of workers, and in the determination of employee compensation, training, incentives, privileges, benefits or allowances, and other terms and conditions of employment. The prohibition on the basis of Sogi also includes the contracting and engaging of services of juridical persons.

The measure also decries as discrimination the refusal of admission or the expelling of a person from educational institutions on the basis of Sogi without prejudice to the right of educational institutions to determine the academic qualifications of their students. It’s also discriminatory to include the imposition of disciplinary sanctions solely on the basis of Sogi, and providing penalties harsher than customary primarily due to Sogi.

Bayan Muna also seeks to revoke the antediluvian laws against vagrancy which Atadero says targets gay men. It penalizes harassment committed by members of institutions involved in the enforcement of law and the protection of rights, such as the Philippine National Police (PNP) and the Armed Forces of the Philippines (AFP), against any person on the basis of his or her sexual orientation or gender identity.

Among other cases, harassment occurs when a person is arrested or placed in the custody of the government institution and extortion, physical or verbal abuse takes place. It does not matter in the least whether the arrest has legal or factual basis.

Harassment of juridical personalities on the basis of Sogi of their members, stockholders, benefactors, clients, or patrons are also covered in the proposal.

HB 1483 also considers it discrimination if a person is denied access to or the use of establishments, facilities, utilities or services, including housing, that are open to the general public because of his or her Sogi. The measure also expands the meaning of ‘denial of access’ by including the provision of inferior accommodations or services on the basis of Sogi.

Of course, Atadero said, it’s not enough to provide legal definitions. “There should also be sanctions. The inclusion of criminal or administrative charges make HB 1438 even more serious,” he said.

The bill’s section six lays down that those found guilty of any of the discriminatory practices will face a fine of not less than P250,000 ($5,619), but not to exceed Five Hundred Thousand Pesos (P500,000 or $!1,238) or imprisonment of not less than one year but not more than six years, or both at the discretion of the court. Officials directly involved will be be liable for violations committed by corporations, organizations or similar entities. Finally, perpetrators will be recommended for community service time, to include undergoing human rights education and exposure to the plight of the victims.