For Ilang-ilang Quijano and King Catoy, it was all about protest culture: red, purple — and placards on the cupcakes. For Deejay Acierto and Neil Legaspi, the revolution and the Katipunan were the most meaningful inspirations.

MANILA — On January 15, two activist couples were wed at the same time in two different churches in a not-so-ordinary fashion.

Purple-and-red was the motif of Ilang and King’s wedding and “protest culture” was the theme. Deejay and Neil, meanwhile, had a Katipunan-inspired wedding.

Both couples not only pledged their love for each other but also reaffirmed their commitment to serve the people. Both weddings, too, were products of collective effort, with support of families, relatives and colleagues.

Ilang, 28, and King, 31, got the chance to work together during the People’s International Observers’ Mission last 2007 elections. They were assigned in Quezon province and documented cases of electoral fraud and violence. Instantly, they became each other’s “crush,” albeit secretly then. It took time before King formally courted Ilang. Their common interests in art and films made them closer. The next year, the two entered into a relationship.

Deejay, 31, and Neil, 41, were both youth activists at the Philippine Normal University (PNU) when the courtship happened. When Neil expressed his desire to court Deejay, the latter was initially anxious. “I thought of him as a big brother. But fellow activists were persistently egging me to accept Neil’s courtship. Later, I decided to give myself a try to know him better and also give him a chance to do just the same,” she said. In January 2000, Deejay and Neil said “yes” to each other. 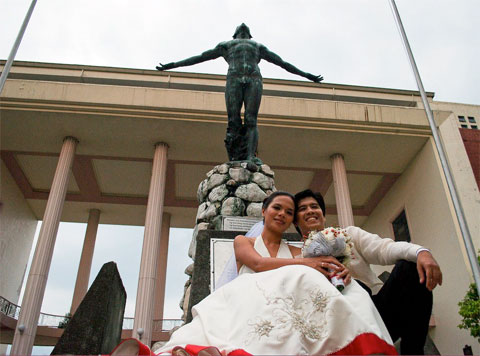 Ilang and King before the UP Oblation minutes after they exchanged vows. (Photo by Macky Macaspac / bulatlat.com)

Deejay said they have different interests. She likes alternative rock; Neil prefers classical and folk music. She wants romantic-comedy movies, Neil prefers action movies. But the two went well anyway. When emails and chat are not yet “in,” they send love letters to each other.

True to its theme, Ilang and King’s wedding was replete with symbolism.

Ilang was elegant in her white and red wedding gown, bought by her mother “at a super-friendly” price, she said. King wore a simple Barong Tagalog. The bride rode a Combi car owned by a friend to get the church while the groom and his best man, RJ Mabilin, rode a white tricycle.

Fr. Greg Obejas of the Religious Discernment celebrated the Mass. Fr. Greg said he was honored to wed the two whom he met because of the struggle for human rights and justice.

The Bible verses read during the Holy Mass were chosen by the couple themselves. They speak of service to others.

Guests were greeted with a red streamer that read: “Mabuhay ang bagong kasal!” (Long live the newly-weds!) at the Bonsai Garden at the University of the Philippines in Diliman.

Instead of the usual wedding cake, cupcakes in a tower was the centerpiece, baked by their friend and fellow activist Ayi Muallam. Small placards served as the toppers with slogans like “End impunity!” and “Struggle for national democracy!” On top of the tower were two small rag dolls sewn by King’s sister Ira.

Raymund Villanueva of Kodao Productions and Malu Bagwis served as emcees at the program. Most of the time, people were laughing. The lights went out twice when Pinoy Weekly staff, led by Kenneth Guda, offered a heartfelt song for the couple. “The glitches added to the fun,” Ilang said.

Instead of throwing out the bouquet and the garter, contests were devised for single men and women. The men had to put on a cloth diaper to a baby doll. The rationale was that the men should be partners of the women in rearing children. The women, on the other hand, wrote their sentiments to their future partners in a placard. King’s cousin Mira, who wrote “Asawa, hindi alipin!” (Wife, not a slave), won.

Contrary to tradition, money was not pinned on the clothes of the couple. Two collection boxes made by the couple’s friend Pom Cahilog-Villanueva were passed along –- the same way workers on strike and activists in protest use collection boxes to get support from the public.

Dedications to the couple were written in a little red book, inspired by Mao Zedong’s red book. Souvenirs for guests were button pins with the text “Mabuhay ang bagong kasal!”

King’s friend Raymond Panaligan was the “official” photographer but many other friends could not resist taking photographs and video. Ron Papag took the video.

The touching part was when the bride sang to the groom the song “Forever Young.” Ilang’s father Dr. Romy Quijano wept and so did several others in the hall.

One of the highlights of the program was when King’s father, Katsch Catoy, the stage lighting designer, gave a speech that had something to do with him having grandchildren soon, to put it mildly.