Casiño said that while the Bill of Rights guarantees equal protection for men and women, and even as the Philippines is a signatory to international agreements on respect for human rights of all persons regardless of any condition, including sex or sexual orientation, there is still a wide gap when it comes to upholding the legal rights of members of the LGBT sector.

“The present and future realities existing in the country should not be left behind by law. The noble intentions of numerous national laws and international agreements are still wanting with respect to our compatriot LGBTs.They continue to be discriminated by society at large, primarily because of misconceptions and systemic State ignorance,” he said.

The Philippines is a signatory to declarations and agreements of international institutions, such as the United Nations Human Rights Committee (UNHRC) and the UN Committee on Economic, Social and Cultural Rights, to include protection against discrimination on the basis of sexual orientation. 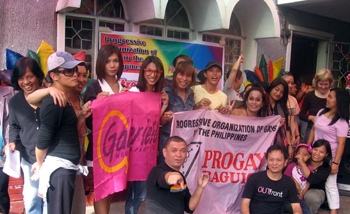 HB 1483 is a step toward making Philippine laws more responsive to the needs of the country’s LGBT constituents. Photo taken during the 1st assembly of ProGay in Metro Baguio, December 20, 2010. (Photo courtesy of Oscar Atadero / bulatlat.com)

“Despite all this, there is no legal definition of discrimination against LGBTs,” Casiño said.

Casiño agreed that LGBTs often find it difficult to exercise their rights as persons, laborers, professionals, and ordinary citizens. He said that prejudicial practices and policies – mostly unstated and unwritten – based on Sogi severely limit the exercise and enjoyment of the basic rights and fundamental freedoms in schools, workplaces, commercial establishments, the civil service, even the security services,” he said.

Given this, Casiño said it is long overdue that practices that discriminate against LGBTs be given legal definition and be penalized .

Atadero has already expressed full support for Casiño’s bill, saying that the Philippine LGBT community should rally behind the measure and pressure lawmakers to do the same. He insisted that LGBTs do not want nor claim additional “special” or “additional rights.”

“The Bayan Muna LGBT bill only seeks to push for the the observance of the same rights – basic civil, political, social and economic rights – as those of heterosexual persons that are being denied LGBTs, either through current laws or practices – ,” he said.

While Atadero says that LGBT rights are at first glance emotional in origin – “Defending the way we are, the way we live and how we contribute to society is really an emotional struggle for someone who has just come out of the closet, even for those who are afraid to come out” –, it is also a political struggle.

“It is part of the fight for human rights because our defense of our Sogi is always part of our struggle for economic survival and political emancipation. Equality is not something you just demand in principle, you do it for concrete reasons: you want to seek employment, you want to be able to create and learn, because you want to serve others without barriers. Discrimination against LGBTs is like a transparent wall: you don’t immediately see it, but when you walk into it, you get hurt. We want to remove this wall, and fully empower LGBTs not only to defend their rights, but also to enable them to contribute more to society,” he said.

Atadero said politicians and government officials always say they love gays because 1) Gays make them happy; 2) Gays make them beautiful, and 3) Gays are productive members of society. “But how will they give concrete form to this ‘love’ if they won’t support gay rights and the passage of laws that will protect and uphold it?”

“It wasn’t unexpected of Bayan Muna to file such a measure in support of LGBTs. The LGBT community support its bill fully and we will campaign for its passage. Even if it would not be passed into law, it is already a very good step toward the right direction in making Philippine laws more responsive to the needs of the country’s LGBT constituents.”