Bulacan Residents Up in Arms Against Dumpsite

“How can these officials and businessmen put the health and very lives of our children at risk? They are also destroying the environment in the name of profit.” – Fr. Anacleto Ignacio, parish priest of San Jose del Monte City.

MANILA — No to dumpsites, no to corruption.

This was the rallying call of community residents of San Jose del Monte City, Bulacan and their supporters from among the religious when they trooped to the House of Representatives last January 18. They called on legislators to help them stop the construction of a dumpsite, which, they said, was given the go signal by the local city council but was unanimously rejected by the residents.

Accompanied by various religious leaders, the residents said they would continue to fight tooth and nail against the dumpsite project because they know it would pose serious health hazards to those living within the immediate vicinity and would damage Bulacan’s environment. They said there was also the strong possibility that if a dumpsite is built in their area, the water supply of San Jose would be contaminated and be rendered unfit for consumption.

The city councilors approved City Council Resolution No. 2010-154-12, which approved the construction of the landfill in Brgy Minuyan. The site is adjacent to the Water Treatment Plant of San Jose Del Monte Water District, as well as the pipes of the La Mesa Dam Aqueducts. In the said resolution, the continued construction, improvement and operation of the Engineered Sanitary Landfill in Manila Newtown Estate, which is being run by the VG Puyat Group of Companies, was given the green light. Against strong protests of residents, the city council passed the resolution last Dec.1, 2010.

Parish priest Fr. Anacleto Ignacio decried how, even with the obvious health risks, the municipal government allowed the construction of this landfill. “How can these officials and businessmen put the health and very lives of our children at risk? They are also destroying the environment in the name of profit,” he said. 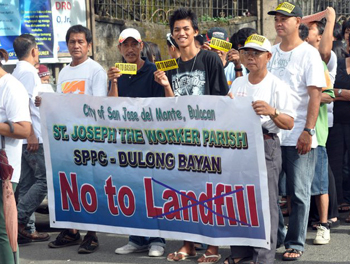 San Jose del Monte City has a total land area of 31,294 hectares and a population of 830,341 as of 2010. Its population rate is pegged at 10.1 percent, higher than the national percentage of 2.36 percent because of the huge resettlement and housing development projects in the area. It is said that 4,000 families would be immediately affected by the dumpsite project, which has been under protest for the last three years.

Lone District of San Jose Del Monte Rep. Arturo Robes has already denounced the landfill project. He has been at loggerheads with San Jose del Monte city mayor Reynaldo San Pedro. Robles called for a congressional investigation into the issue.

In his privileged speech, Robes said waste materials from the dumpsite would mix with sub-surface water and would, without doubt, end up contaminating the source of drinking water of the community.

”During water run-offs, these wastes are carried down through streams, rivers and other low lying areas and will endanger both aquatic and human lives,” he explained.

According to Robes, municipal solid wastes from other local government units are unbundled. He said there is the big possibility that these contain hazardous material such as infectious and toxic wastes, animal waste, chemicals, paints, fertilizers and pesticides. Apart from contaminating water and soil, these waste materials also emit fumes and vapors that are dangerous when inhaled.

While the disposable volume of waste materials generated by the city only runs to a maximum of 50 tons per day, it has been revealed that that the Department of Environment and Natural Resources (DENR) Regional Office 3 issued two Environmental Compliance Certificates (ECC) on the landfill project in seven months, which granted the VG Puyat’s landfill project clearance to admit and process up to 200 metric tons of waste materials per day (December 2008) and reclassified the Manila Newtown Estate Landfill as a maximum-capacity Category 4 landfill designed to admit and process over 200 metric tons of waste materials per day (July 2009).

Robes questioned the DENR’s hasty approval of the landfill facility’s capacity upgrading despite the fact that that the disposable volume of waste materials the city generates is only 50 metric tons.

In the meantime, various residents blasted the city government for forging a deal with the VG Group. They said the landfill operator has already been proven guilty of dumping municipal solid wastes from other local governments into the facility as early as January 2010, long before Resolution 2010-154-12 took effect. They said there was corruption in the deal, and large sums of money might have changed hands.

City Councilor Jay R Bartolome said the local council should not have entered into a partnership with the VG group. “They have been dumping waste materials without going through the proper process. The smell emanating from the dumpsite is foul and disgusting and we could not even begin to contemplate the horror of the bacteria festering there. The health of residents in San Jose Del Monte is in serious danger,” he said.

Local community leaders took turns accusing the city council of short-changing the government in collusion with the VG group. They alleged that the owner of the landfill is required to pay the city government only P30 ($0.67) for every truck load of municipal wastes from other local government units.

In the meantime, environmental activist group Kalikasan People’s Network for the Environment puts the blame at the feet of the DENR and various corrupt local government officials.

“In the guise of solving the waste problem in Metro Manila, they approve the construction of landfills, but what is not being said is how they are posed to make millions from the construction and operation of defective sanitary landfills,” said Clemente Bautista, the group’s national coordinator.

Bautista said the availability of funds from the national government and the lucrative tipping cost of garbage from Metro Manila is a big incentive to corrupt government officials.

Based on records of the National Solid Waste Management Commission (NSWMC), there are 16 existing sanitary landfills in the country. In addition, there are 19 landfill sites, which have already been issued environmental compliance certificates (ECCs) and are undergoing construction.

Besides San Jose del Monte, landfills are also in the process of construction in San Mateo, Rizal and in Ternate, Cavite. The areas marked as garbage dumping grounds are watersheds or forest areas.

“As Metro Manila tries to resolve its perennial problem of garbage, more and more communities and environmentally critical areas outside the sprawling metropolis have been marked as dumping grounds for an estimated 8,000 tons of waste generated daily. These so-called “sanitary landfills,” however, have many flaws and the process of the approval of their construction and operation are full of irregularities, ranging from lack of technical feasibility, inherent threats to the environment and health of the residents, to local corruption,” he said.