Bayan Muna Rep. Teddy Casiño said agriculture agencies and government-ran agricultural schools are mandated by the law to promote organic farming. So why are they promoting genetically modified crops like Bt eggplant?

MANILA – Government agencies and institutions that are supposed to promote organic agriculture in the Philippines are violating the law because these, too, are proponents of genetically modified organisms (GMOs), Bayan Muna Rep. Teddy Casiño said this week.

Casiño said Congress should investigate the involvement of these agencies and institutions in promoting GMOs, which critics deem harmful to humans and the environment.

“Congress, through its Committee on Agriculture and Food, has to look into the cases of testing and releasing genetically modified organism (GMO) crops into the Philippine environment,” Casiño said.

He expressed incredulity that the proponents of Bt eggplant in the Philippines, particularly the Department of Agriculture, the Bureau of Plant Industry and the University of the Philippines Los Baños (UPLB) and other state colleges and universities, are the same entities tasked to spearhead organic agriculture in the Philippines. 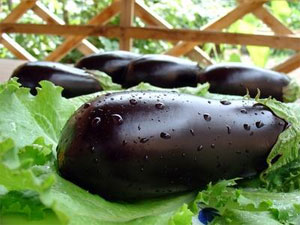 “Field tests on Bt eggplant runs counter to organic agriculture law and the Cartagena Protocol on Biosafety, a protocol to which we are a signatory,” Casiño said. “By allowing the field tests and even by merely planning to sell Bt eggplant in the market, these agencies are breaking the law and, much worse, they are putting public health at risk.”

Among the schools that participated in recent field tests of Bt eggplant is the University of the Philippines- Mindanao, which was forced to uproot and destroy the crops after the local government issued a cease and desist order in December.

Republic Act 10068 or the Organic Agriculture Act was signed into law on April 6, 2010. The main premise of this law was that the government should promote, propagate, develop and implement the practice of organic agriculture in the country.

Casiño said the National Biosafety Framework of the Philippines and the Local Government Code of 1991 were also ignored when it came to government decisions relating to Bt eggplant.

Article 2 of the Cartagena Protocol states that the “development, handling, transport, use, transfer and release of any living modified organisms are undertaken in a manner that prevents or reduces the risk to biological diversity, taking also into account risks to human health.” 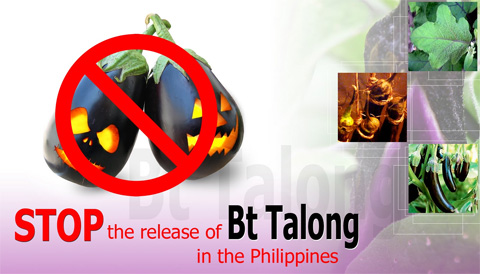 An anti-GMO poster from Bayan Muna.

There were also organic plants in lightweight pots, such as aloe vera, spinach, oregano, tarragon, and lemon grass. Bunches of organic pechay were also sold, as well as tomatoes, chili, and bottles of organic honey. The produce were sold in booths sponsored by various people’s organizations and sponsors.

The festival also featured a forum on safe and sustainable food, and planting techniques which organizers said can help the country attain food self-sufficiency and bio-safety. There was also a lecture on urban farming and organic agriculture.

Casiño said that they held the event to popularize their advocacy on food security and biosafety issues among other legislators as well as employees in congress. He said there is a serious need to look into the government’s programs when it came to attaining food security while keeping tabs on bio-safety that involves public health and has impact on the environmental.

In the last decade, progressive farmer organizations led by KMP and scientist groups have been campaigning against the commercialization of GMOs — hybrid rice, BB Rice, Bt Corn, hybrid papaya and other genetically altered produce because of serious health and environment concerns.

In September last year, Bayan Muna launched what it called an all-out war against the Bt eggplant, a genetically engineered eggplant that is allegedly resistant to a local pest, the Fruit and Shoot Borer.