MANILA — “More workers die from work-related accidents and disease than from war.”

This was the assertion of Institute for Occupational Health and Safety Development (IOHSAD) executive director Noel Colina in reaction to reports on the death of 10 construction workers in Makati today, January 26, 2011.

The 10 were killed when the gondola they were riding as they were installing glass panels broke. They fell from the 28th floor to the 7th flor of the Eton Residences in Makati City.

After the accident, the Makati city engineers office ordered a stop to the construction pending an investigation. Eton Properties is owned by tycoon Lucio Tan and expressed regrets over the incident.

An investigator from the Bureau of Fire Prevention pointed out that the gondola, an electricity powered lift used on construction sites, could carry only two persons at a time. The Department of Labor and Employment has also sent its occupational safety engineer to inspect the site to determine possible violations of safety regulations. 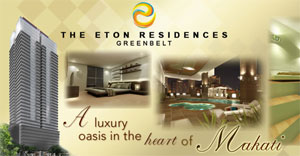 Colina agreed that there was a need for a thorough investigation of the incident. “Authorities should investigate the contractor and the owners of Eton for their individual responsibilities or the remiss thereof of providing safety for their workforce, ” he said.

“What’s the difference between those who planted the bomb on the bus and the people who neglected the lives of the 10 workers?” he asked, referring to the January 24 bombing of the Newman Goldliner bus in Makati wherein five civilians were killed.

He also criticized the DoLE Order 57-04 allowing self-assessment for workplaces with more than 200 workers.

Based on Section 1 of the Labor Standards Enforcement Framework, compliance of labor standards is already guaranteed if a company conducts “self-assessment.” This voluntary mode is encouraged in establishments with at least 200 workers.

“It is high-time that the DoLE revoke this order which allows companies to do self-assessment of their compliance to working standards. This allows erring companies and contractor to cut corners in safety standards and save on costs, placing workers lives at risk in exchange for more profit.”

In 2009, the IOHSAD recorded 26 deaths and 116 injured in the construction sector.

“The Construction sector has been classified under Rule 1013 b of the Department of Labor and Employment (DoLE) Occupational Health and Safety Standards as a hazardous sector to work in,” said Colina.

“This classification means that workers are always face great risks to their well-being. Vigilance in upholding safety of the workforce must be the priority and is the principal responsibility of the employer.”

IOHSAD also called on the Employees Compensation Commission (ECC) to send field personnel to the residences of the victims to expedite the compensation procedures for the families they left behind.

In the meantime, reports reveal that Eton pays its construction workers P260 per day, way below minimum-wage standards. The current minimum wage in the National Capital region is pegged at P404.

Colina said that for P260 a day, workers carried loads twice their weight 32 floors up, so Eton can provide “luxurious all-loft condominium units.”

Workers in the construction industry and adjunct industries are mostly contractual and do not have the same rights and benefits as their counterparts in the manufacturing sector and the rest of the private sector.

Many are not provided with the proper protective gear because as independent contractors, they are expected to be responsible for the acquisition of such protective gear. Project employees in the meantime are hired on per contract basis. They are required to sign a stipulation in their respective contracts that states that they are hired until the accomplishment of the project.

Colina said his organization is calling all candidates to adopt and create a clear platform promoting occupational health and safety. IOHSAD has already laid down four proposals to the Aquino government and Congress, namely (1) increase the budget for workplace inspection to improve inspection coverage and revoke the DoLE D.O. 57-04 implementing self-assessment and return to mandatory inspection; (2) immediately pass the bill banning the use of all asbestos in the Philippines; and (3) require companies to re-absorb their injured workers as soon as they become fit and (4) legislate “industrial manslaughter” as a way to hold employers accountable for the deaths of their workers in the workplace.