By RENATO M. REYES JR.
Like a Rolling Stone
Posted by Bulatlat.com

Last December 22, 2010, President Benigno Aquino III unveiled the new Internal Peace and Security Plan (IPSP) that would replace the bloody Oplan Bantay Laya. The plan was called Oplan Bayanihan, and was touted as a “paradigm shift” for the AFP. As if to stress the shift, the AFP is no longer using the term “Internal Security Plan” or ISP. It has added the word “peace” to the concept, hence IPSP. The term IPSP is also often used instead of “counter-insurgency”.

What is Oplan Bayanihan?

Oplan Bayanihan is the new Internal Peace and Security Plan (IPSP) that aims to “provide the strategic guidance in the performance of (the AFP’s) mandated functions of protecting the state and the people. It shall help AFP units in planning for and contributing to the attainment of internal peace and security.”

The AFP says that Oplan Bayanihan is a public document which aims to gather support from various stakeholders. We were able to request a copy of the document through the AFP’s Civil Relations Service. The “public” document of course does not include the implementing guidelines of the new Oplan.

What are its salient features?

The new IPSP also claims to espouse a “whole-of-nation” and “people-centered” approach, implying that it is different from the previous ISP’s that espoused an “enemy-centric approach.”

Bayanihan says that it seeks the involvement of various stakeholders, “from the national and local government agencies, non-government entities and the entire citizenry, in addressing peace and security concerns”. It also claims to give “equal emphasis to combat and non-combat dimensions of military operations”. It claims to be a “departure from the old parameters and explores non-combat parameters of success in addressing the country’s peace and security problem.”

The AFP has been fighting a four-decade old armed rebellion led by the CPP-NPA-NDF. Despite the promise of every president since Marcos regarding the defeat of the revolutionary movement, no president has ever succeeded in delivering on this promise. Gloria Macapagal Arroyo attempted during her last three years and failed. This much was admitted by the AFP when it failed to meet its self-imposed deadline on defeating the revolutionary movement. 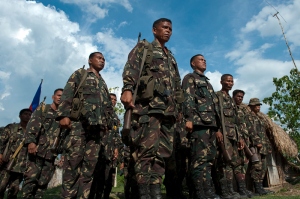 What is the ultimate objective of Oplan Bayanihan?

Bayanihan’s “end-state” or ultimate objective is the reduction of the “capabilities of internal armed threats…to a level that they can no longer threaten the stability of the state and civil authorities can ensure the safety and well-being of the Filipino people.”

How does Oplan Bayanihan aim to achieve its goal?

Oplan Bayanihan “emphasizes that the primary focus in the conduct of military operations is Winning the Peace and not just defeating the enemy. In order to win the peace, the AFP IPSP shall be anchored on two strategic approaches: The Whole of Nation Approach and the People-Centered Security/Human Security Approach.”

“The Whole of Nation Approach is the framework that shall guide how the AFP will implement this IPSP.” This means that the AFP intends to mobilize all the so-called “stakeholders”, both government and non-government, to meet its objectives.

The “People-Centered Approach” meanwhile uses the concept of “human security” which it says intends to meet the needs of the people, including economic development, human rights and so on.