You Are Here: Home → 2011 → February → 1 → The Son of ‘People Power’ and Nothing to Show for It — Not Even Solidarity with Egyptian People

MANILA — The entire world waits with bated breath how the ongoing people’s uprising in Egypt is going to turn out. Minute by minute there are updates by various news agencies both mainstream and independent, despite the Egyptian government’s act of treachery and desperation of shutting down access to  the Internet. Clinging to power by the skin of its teeth, the Hosni Mubarak dictatorship wants to make it impossible for protesters to coordinate, and to hide its brutal crackdown from the eyes of the world.

Here in the Philippines, Filipinos watch footage of the protests on TV and are most likely reminded of the popular uprisings that have taken place in the last three decades and have resulted in the ouster of two presidents, two corrupt regimes both backed by the United States.

As could have been expected, President Benigno Aquino III has been silent. His myriad of political advisers must’ve cautioned him against speaking about the issue, but more likely, even without their prodding, he would’ve chosen to remain silent because he wouldn’t know what position to take. 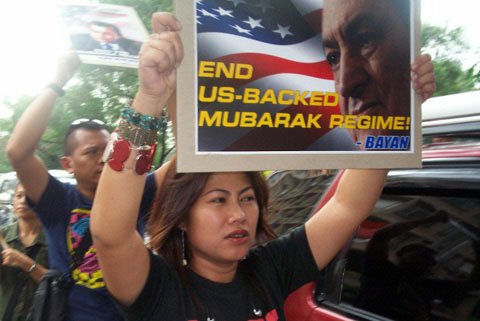 Imagine the quandary he’s in: His own mother was catapulted to the presidency via Edsa 1, the culmination of two decades of struggle of the Filipino people against the abuses of the Marcos dictatorship. He should at the least salute the Egyptian people for their courage and unity in fighting the Mubarak dictatorship.

But then again, like Mubarak, he is a president who considers himself an ally of the White House, a friend of the very same government that has made sure that Mubarak remained in power for the last three decades. To speak in defense or in praise of the protests would be against the interests of the US government whose officials are, without doubt, twisted into pretzels trying to come up with a safe position and stand on the crisis.

One wonders if Aquino knows that Mubarak has managed to remain in power because of the US’s continuing economic and military support. That receiving  $1.3 billion a year in military assistance, it’s  the second largest recipient of US Foreign Military Financing next to Israel. That for economic aid, Egypt also gets $815 million annually. That for all the financial assistance, however, Egypt’s economiy remained crippled, registering unemployment rates as high as 11% in the last 10 years. That much of the aid has been used to purchase military goods, including American-made tear gas and grenades used this week against innocent people.

Hardly a leader worth emulating or supporting, but by not giving an opinion, Aquino already reveals where he stands. He has chosen to remain silent, and as history unfolds in the Middle East and changes take place that can impact on the economic and political direction the region can take, he most likely waits for a more comprehensive announcement from the White House.

In the meantime, the 6,5000 Filipino workers in Egypt and their families in the Philippines are asking in growing desperation what the Philippine government’s course of action is when it comes to evacuation.

Deputy presidential spokesperson Abigail Valte has announced that embassy officials in Egypt had already drawn contingency measures in case the situation worsens, among them the setting up of evacuation centers in Cairo and Alexandria, but based on feedback from Migrante International members in the Middle East, the contingency measures are sketchy at best. No converging sites have been announced, and the hotline numbers Filipinos were provided were connected to the Department of Foreign Affairs (DFA) offices here in the Philippines, and not to any evacuation center in  Egypt.

Had Noynoy Aquino been genuinely the sort of president his campaign handlers and spin doctors in the May 2010 polls touted him to be, he would have been elated over the massive show of solidarity and unity being shown by the Egyptian people. He would have extended a hand in congratulations that an entire nation is putting an end to 30 years of dictatorship wherein they suffered from economic and political crises one after the other, their collective dignity trampled as their leaders obeyed with alacrity Israeli and American government dictates. He would’ve lashed out against the Mubarak dictatorship for its military offensives against civilians.

He would’ve exhorted Filipinos to take inspiration from the Egyptian people as they fight corruption and attempt to rebuild their society wherein, hopefully, the same mistakes will not be repeated and the r true democracy can begin.

But he’s not the man his press release writers, his campaign handlers, his political stylists built him up to be, so there is nothing more to expect from Aquino beyond explanations justifying the purchase of expensive cars, the appointment of gun-toting buddies, and the necessity of having someone like Mar Roxas to back him up.

So now it’s up to all freedom and democracy-loving Filipinos to speak out in unity with the Egyptian people and support them in their efforts to put an end to a dictatorship. We can make up for the shameful silence of our government — a supposed champion of democracy in Asia — and loudly declare that we are behind the people of Egypt as

To the people of Egypt: fight the good fight and may you find leaders worthy of the sacrifices you are now making.