You Are Here: Home → 2011 → February → 7 → Bulatlat: A Decade of Incisive, Progressive Journalism

Today, Bulatlat marks its 10th anniversary. While we have every reason to celebrate this occasion — we have, after all, created a niche in the Philippine press through our own brand of incisive and progressive journalism — it is important to point out that the conditions that we set out to chronicle a decade ago that were, in fact, our raison d’être — economic backwardness, human-rights abuses, landlessness, political persecution, corruption, to name a few — still persist. That said, here’s to the next 10 years — and beyond! 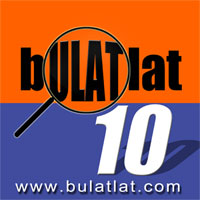 MANILA — The Estrada impeachment hearing in 2001 was dubbed as the most popular, most watched telenovela during that time. This was reflective of the highly politicized atmosphere then. It also indicated that 15 years after People Power I in 1986 , the Filipino people once again felt the need to engage in direct political action to effect change. This was not surprising.

After the Marcos dictatorship was ousted from power, there was much hope that democracy would reign, social justice would be achieved, prosperity would follow, and the Filipino people would finally benefit from the country’s wealth and natural resources. But apart from the restoration of the people’s formal democratic rights, the release of political prisoners and the framing of the 1987 Constitution, which adopted international human rights laws, conventions, and principles, the Cory Aquino administration was marked by a series of coups d’état that made sure that the government drifted to the right; a bloody counterinsurgency campaign that resulted in two massacres (the Mendiola and Lupao massacres), the displacement of millions of peasants, an unprecedented number of victims of enforced disappearances, and the wanton display of brutality by paramilitary units (a photo of two members of a paramilitary unit holding the head of one of its victims graced the cover of a magazine, which was published by a human-rights organization.)

When a former general, Fidel V. Ramos, took over the reins of government in a hotly contested presidential election in 1992, the Filipino people began to hope once more. Ramos provided a vision of a country taking off from conditions of backwardness and widespread poverty. He fast-tracked the local implementation of the globalization project, opening up the country to foreign trade and investments. The Ramos administration auctioned off government-owned and -controlled corporations, thereby generating revenues for the government. However, after the government sold most of its valuable assets to foreign investors and their local partners, and when Southeast Asia was hit by a financial crisis that was triggered by capital flight, the illusions of a prospering economy disappeared.

Thus, the people pinned their hopes on Joseph Ejercito Estrada who projected himself as a champion of the masses. However, his administration was cut short by a people fed up with the brazen display of corruption and ostentatious living amid the worsening poverty. The Filipino people’s yearning for change was once again concretized by direct political action.

The period during and immediately after People Power II in 2001 was an opportune time to discuss issues and problems that confronted the Filipino people after the dictatorship was toppled. Why is life even more difficult for the Filipino people 15 years after the dictatorship? Why is another People Power uprising necessary? What are its limitations? Who was to replace Estrada, especially since the vice president then, Gloria Macapagal-Arroyo, was not very popular? The political atmosphere of the time was fertile ground to discuss not only why change did not come about after 15 years but also the path toward and the imperatives of change that would genuinely benefit the Filipino people.

At the same time, a new medium had been opened up for advocacy on issues: the Internet. The second People Power uprising, which toppled the Estrada administration, demonstrated how technology, in this case text messaging, could be used to mobilize people. But the Internet was still underutilized then. The “high technology” bubble in the US had burst by then and closures and retrenchments had doomed Silicon Valley, but in the Philippines, the Internet was just beginning to become popular.

Thus, Bulatlat was conceived and launched barely two weeks after Estrada stepped down from power and Arroyo assumed the presidency.

Arroyo turned out to be much worse than her predecessors. The Arroyo administration was the best example of the limitations of a People Power uprising and was the best argument for the need for thoroughgoing change. It demonstrated that a mere change in the people holding positions in government is not enough. Elite politics and rule was at its worst under the Arroyo regime. The corruption, the debasement of democratic processes, and the gross human-rights violations were second only to the Marcos dictatorship. Not only that, the economic crisis and the widespread poverty further worsened.

Amid all these, Bulatlat found and developed its niche in an industry dominated by media conglomerates. Bulatlat did not merely write about the numerous corruption scandals being exposed left and right — it explained why corruption is endemic in elite rule and politics in the context of the country’s backwardness. It did not just write about the spike in human-rights violations, especially extrajudicial killings and enforced disappearances — it explained how the Arroyo administration, which was desperately clinging to power, was using all the institutions of government for its self-serving ends, making numeorus attempts to curtail civil liberties and was attacking those who were fighting its rule. Bulatlat traced the trail of blood to its roots: Oplan Bantay Laya, the Arroyo government’s bloody counterinsurgency program, and dicussed the role of the United States, which, while perfunctorily condemning the extrajudicial killings in the Philippines, was advising, aiding, and arming the Armed Forces of the Philippines and was conducting preemptive strikes, political renditions and assassinations, and using torture around the world under the guise of its “war on terror.”

Furthermore, Bulatlat provided a face to every victim of human-rights violation. It chronicled the lives of the victims, their contributions to the defense of the people’s rights and to the struggle for change. It described the impact of the killing or abduction to the families of the victims and how their death or disappearance serves not to cow but to inspire his or her colleagues in the progressive movement.

In discussing the economic crisis and the worsening poverty, Bulatlat did not just cite macroenconic data such as the Gross National Product or Gross Domestic Product, the behavior of the stock market, and the value of the peso — it discussed the roots of the crisis, the failure of globalization and its concomitant policies of liberalization, deregulation, and privatization, and the need for a radical reorientation and restructuring of the economy. Bulatlat thoroughly discussed the impact of these globalization policies on the different sectors: the peasants, workers, migrant workers, urban poor, women and children, youth and students, national minority peoples, as well as its impact on the environment and the rights of the Filipino people.

Bulatlat discussed the question of sovereignty, or the lack of it — the IMF-WB impositions, how multinational corporations extract profits by exploiting Filipino workers and raping the country’s natural resources while getting numerous incentives from the government, and how the increasing US intervention in the country’s affairs and the continuous presence of US troops in the country ensure that the national government does not veer away from the agenda and policies of imperialist globalization.

Bulatlat also strived to provide a human face to the worsening poverty in the country so that the discourse would not be limited to policy questions and theoretical constucts.

Bulatlat sought to propagate a people’s culture and an alternative view to world events by publishing the works of progressive artists and writers, journalists and political analysts.

And to give the readers a better perspective of the issues and the lives of the Filipino people, to give flesh and blood to the stories, and to expand the reach and impact of its articles, Bulatlat, in 2009, began utilizing the tools of multimedia and the reach of social-networking sites.

The nine years of the Arroyo administration tested the mettle of Bulatlat. And Bulatlat has grown from an organization with three volunteer writers-editors publishing around three new articles per week to what it is now: still comprised of less than 10 volunteer staff but publishing around 20 new articles per week. Its reach expanded from a few hundred unique visitors a month to tens of thousands a month.

The task that Bulatlat committed to did not end with the promises of change by the current administration of President Benigno S. Aquino III. In fact, behind the lofty promises and the strongly worded rhetoric, there are no indications that the current Aquino administration would veer away from the path that was pursued by the Arroyo administration. It is implementing the same economic policies, which are consistent with the failed globalization project. It has been following the same IMF-WB dictates and the same agenda being pushed by the US, including the strengthened presence of US troops in the country. Extrajudicial killings and other human-rights violations are continuing and justice for the victims remains elusive. Beyond the tough talk and the numerous exposes of corruption involving key officials of the previous Arroyo administration, the Aquino administration has not shown political will in holding Arroyo, her family and her cronies accountable for their numerous crimes against the Filipino people. Thoroughgoing reforms are nowhere in sight.

In the years to come, Bulatlat would continue doing what it does best: publish incisive articles on issues by taking the perspective of the majority of the Filipino people while conforming to the highest standards of responsible journalism. Bulatlat would strive to make its articles better by integrating more multimedia tools. In the final analysis, the gauge of Bulatlat’s effectiveness is in the dissemination of its advocacies and its contribution to the public’s understanding of the issues confronting the Filipino people and the appreciation of the need for meaningful change.