You Are Here: Home → 2011 → February → 8 → Reyes’s Death Should Spur Deeper Probe Into Systemic Corruption in Military

MANILA – Cause-oriented groups said today the death of former armed forces chief of staff Angelo Reyes should compel authorities to step up their investigation into the alleged massive corruption within the military.

Reyes, who was also former defense secretary, apparently committed suicide Tuesday morning. Reyes was implicated in the ongoing congressional hearings looking into corruption in the military and the plea bargaining deal between the Office of the Ombudsman and ex-military comptroller General Carlos Garcia. Reyes was supposed to attend a House hearing today.

In a statement, Pagbabago! People’s Movement for Change said that the ongoing investigation should result in making those accountable to answer for their crimes.

“This is an unfortunate event and we condole with the family of Gen. Reyes. But it is in the national interest that his death should not in any way derail the investigations being conducted by the Senate and the House. On the contrary, these probes must intensify to get those involved, whether military or civilian officials, accountable”, said Father Joe Dizon, Pagbabago! spokesman. 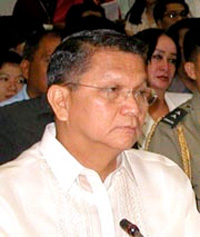 Dizon said Reyes, who also served as a secretary of various Cabinet departments under the administration of Gloria Macapagal-Arroyo, could have helped shed light on the systemic corruption not only within the military but also in the civilian bureaucracy of the previous regime.

Reyes was served as secretary for defense, environment, local government and energy, among others. He tried to run for Congress under the party-list 1-Utak but was disowned by the party.

In the same vein, Kabataan Rep. Raymond Palatino said the incident should not delay the investigation on the corruption cases involving Reyes himself and top government officials especially from the military.

“It is unfortunate that Reyes passed away for he could have been a vessel in solving these corruption cases. While we condole with his family and friends, I sincerely hope that the people’s quest for truth and justice will not be delayed by this sad incident,” Palatino said.

“Without a doubt, the House hearing today is tinged by the death of Reyes. However, it will be more tragic if the corruption cases will remain unsolved and those responsible will not be put to justice. I urge my fellow government officials to be more determined in putting an end to corruption. It is the people’s welfare and interest that is at stake here,” Palatino added.

Meanwhile, Karapatan spokesman Roneo Clamor said that Reyes’s death “should bear on the conscience of the Armed Forces of the Philippines (AFP), particularly its officers’ corps.

“Reyes embodied the politicized military… The AFP leadership should rethink its role in society if his death would have relevance,” Clamor said.

Clamor said Reyes was the AFP chief when the bloody US-backed counter-insurgency Oplan Bantay-Laya was implemented. He was a key player in the EDSA 2 as he led the military in withdrawing support for then President Joseph Estrada.

“While we regret one unsolved mystery in the corrupt practices within the AFP, the on-going investigations into the AFP slush funds should be pursued in the interest of truth, justice, government accountability, and genuine civilian supremacy over the military,” Clamor added.

Marie Hilao Enriquez, Karapatan chairwoman, said Reyes, as one of the brains behind Oplan Bantay Laya, could have shed light on the cases of extrajudicial killings and enforced disappearances.

“Sadly, he chose to remain silent up to the very end. I hope that this will also serve as wake-up call to all those who must answer the people’s demand for justice. Only the truth can give us peace of mind,” Dizon of Pagbabago! said.