You Are Here: Home → 2011 → February → 11 → After Successful Strike, Footwear Workers Face Another Hurdle

MANILA — After their successful strike last year, members of the Bleustar Workers Labor Union (BWLU) face more challenges as the union prepares for a certificate election (CE) on February 18. This, despite finalizing a collective bargaining agreement with the management of the Bleustar Manufacturing and Marketing Corporation (BMMC).

BWLU is a member of the Alliance of Nationalist and Genuine Labor Organizations-Kilusang Mayo Uno (ANGLO-KMU) representing 205 rank-and-file workers, 85 percent of whom are women. The company is located in Muntinlupa and produces Advan-branded rain boots and shoes.

The BWLU and BMMC management signed the CBA on November 18, 2010, three days after the workers staged a strike in protest of the company’s various labor rights violations including negotiating in bad faith, union busting, sexual harassment, and other unfair labor practices. After the signing, the union immediately went to the Department of Labor and Employment (DOLE) to register the concluded CBA.

Officials of the DOLE, however, said hey are unable to issue a certificate recognizing the CBA because there was a pending Petition for Certificate Election (PCE) filed by another union in the company, the Advan United Workers Labor Union (AWLU). ALWU is a union affiliated with the Trade Union Congress of the Philippines (TUCP). The petition states that there is no union in the company and no CBA negotiation exists between the workers and the management.

The BWLU refuted the statement of AWLU and filed a comment in response to the said petition. Unfortunately, on December 23, 2010, DOLE mediator and arbiter Joel Petaca released a decision favorable to AWLU’s petition for CE.

In a statement posted at the website of Women Wise3 (Women Workers in Struggle for Employment, Empowerment and Emancipation) officers of the BWLU said the certificate election is yet another barrier the management is placing between workers and their demand for a CBA. They said it is part of continuing efforts of the BMMC management and DOLE to dismantle the union. 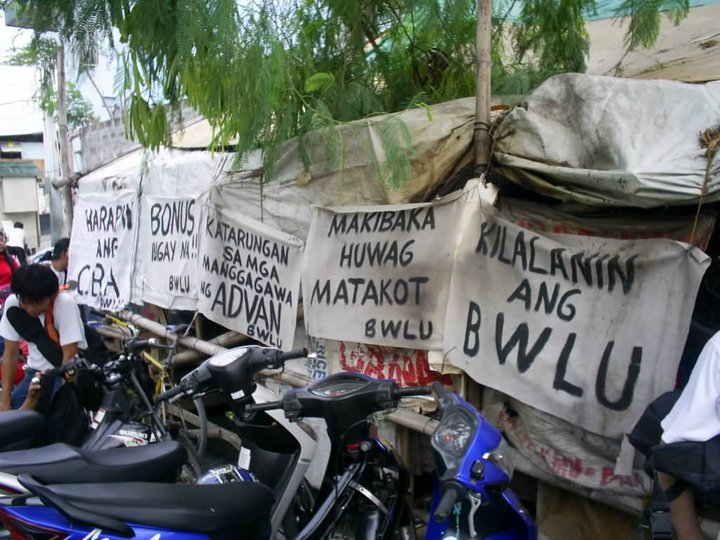 “There is unmistakable connivance between the DOLE and BMMC management. From the beginning when we began our fight for a CBA, the DOLE’s decisions and procedures when it came to addressing our concerns always favored the BMMC management,” said Gloria Bongon, BWLU president.

Bongon explained that on September 22, 2008, BMMC management and BWLU signed a Memorandum of Agreement (MoA) facilitated by the National Labor Relations Commission (NLRC). This was in response to the workers’ two-month strike against sexual harassment, union busting, delayed salaries and benefits and other unfair labor practices. Included in the agreement is the recognition of BWLU as a registered union and the start of CBA negotiation between the two parties on March 2009.

The BMMC, however, did not conform with the MoA and questioned the BWLU’s right to negotiate, stressing the absence of a certification from DOLE recognizing the union as the sole bargaining agent. While the company kept on refusing to bargain, it went on to launch a campaign to dissuade and discourage workers from joining the BWLU which was affiliated with the Kilusang Mayo Uno (KMU). The management proceeded to prod workers into joining the new union it itself was forming, the AWLU.

“The DOLE representative responsible for issuing the Certificate as Sole and Exclusive Bargaining Agent (SEBA) began to avoid the BWLU. He was often suspiciously absent or could not be located. This became yet another reason why the CBA negotiations were delayed,” Bongon said.

Successive protest actions were held by BWLU culminating in a strike on November 15, 2010. In the midst of the strike, the company union AWLU filed a PCE with the labor department on September 2010, stating the absence of union and CBA negotiation in the company.

Far from Being Discouraged

On January 14, 2011, mediator-arbiter Petaca released the decision granting the CE petition by AWLU. The BWLU appealed to the labor department to reverse the decision and asserted the recognition of the concluded CBA. The DOLE refused, and went on to fix the election date, this coming Feb. 18.

“It was proven in our previous struggles that we can never trust DOLE to stand in favor of the workers. We achieve triumphs through our collective action. We are now well prepared for any possibility,” said Bongon.

Bongon said the union is now busy preparing for the certificate election even as they continue to press for the recognition of their CBA.

The BWLU is supported by Women Wise3, a mutual help and advocacy network of widows and families of slain labor activists, women trade union organizers and human rights defenders whose lives are under threat. Included in the network are women workers displaced in the exercise of their right to unionize and victims of abuse and harassment in their own workplaces.