MANILA — A progressive lawmaker takes up the cudgels for Filipinos stranded in Saudi Arabia, saying that they did not go abroad to live under bridges like storm-drain rats.

Last February 7, Bayan Muna Rep. Teddy A. Casino delivered a privilege speech on the problems confronting distressed overseas Filipino workers (OFWs), particularly stranded workers in Saudi Arabia. He said the Aquino government was not putting muscle behind its words that it is concerned about the plight of migrant workers.

“In its deliberations, Congress gave recognition to a model OFW family. It is therefore ironic that even as we speak, 314 of our countrymen, including 79 children, are stranded in Jeddah, Saudi Arabia, camped out in makeshift tents under a bridge near the Philippine Consulate, wanting to go home and pleading for help from our government. These are OFWs most of whom have abandoned their jobs due to maltreatment, violence and other abuses from their foreign employers,” he said. 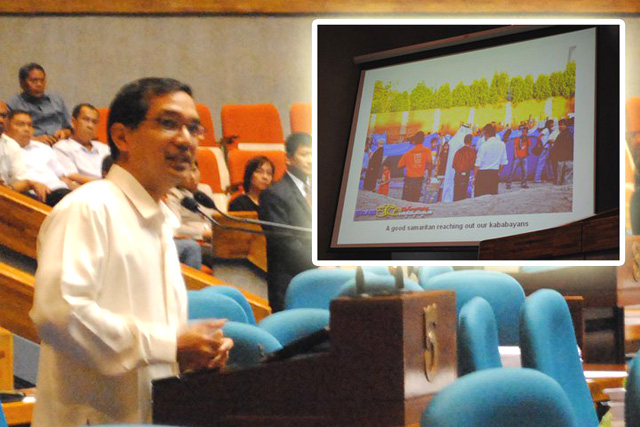 Casino said that in the last two weeks, concerned Filipinos from abroad have been sending him email detailing the inhuman conditions they are facing. The email-senders said stranded Filipinos are now totally dependent on the goodwill and charity of kababayans or countrymen and kind-hearted Arabs.

“In all their messages, there is one common observation – that our consulate is not doing enough to help and our officials abroad are partly responsible for making the situation of our OFW’s worse than they already are,” he said.

The activist lawmakers pointed out that there are 1.5 million Filipinos currently employed in Saudi Arabia, and collectively they remit US$1.3 billion annually to Philippines. The amount, Casino said, constitute a large part of the average annual total of US$15 billion in remittances that OFWs remit to the country yearly.

He questioned what he said was the government’s insufficient response to the pleas for help of abused, maltreated and mistreated OFWs in Saudi Arabia. He said many OFWs who have lost their jobs have been reduced to begging under a bridge or beside the walls of the Philippine consular office in Jeddah.

“We have heard enough horror stories not only about the abuses and inhuman working conditions of our workers there but the arrogance and incompetence of our embassy officials. To them we say bring home our distressed kababayans now,” he insisted. “This is not only a problem of uncaring and incompetent consular officials. This is a problem of a wrong policy made worse. And in this crime against our OFW’s we find the Aquino government just as negligent as the previous administrations.”

Casino then took issue with the funds of the Department of Foreign Affairs (DFA), saying that as the country’s lead agency for foreign policy, its share of the budgetary pie was quite small.

The DFA originally requested a budget of P19 billion ($435 million) for its 2011 operations, but the Department of Budget and Management (DBM) only approved P10.9 billion ($249 million).

“This means our kababayans in Saudi Arabia and thousands of distressed overseas Filipinos elsewhere are facing a tough 2011 in terms of getting government assistance after the DBM slashed by 42.6 percent the budget sought by the DFA,” he said.

With its small budget, Casino said, the DFA could not perform all its functions efficiently. Apart from daily consular and diplomatic services, the DFA is helping some 7,000 Filipinos jailed around the world including 230 in death row.

Instead of utilizing the funds to assist OFWs or increasing allocations for services devoted to their welfare, Pres. Aquino reduced the LAF for OFWs from P50 million ($1.14 million) to only P27 million ($616 thousand) from his contingency fund.

This, migrant organizations cry out, is a gross violation of the Migrant Workers Act, which mandates that the DFA must allot at least P100 million ($2.28 million) for the repatriation, medical assistance and other welfare services for OFWs in distress. The Assistance to Nationals (ATN) fund of DFA, on the other hand, has been reduced to P87 million ($1.986 million) from P100 million ($2.28 million).
“Given this, it’s not just a matter of the DFA having insufficient funds: the bigger issue here is whether the government has the correct orientation when it comes to protecting its citizens living and working abroad. Case in point is what has been happening to OFWs in Saudi Arabia who have fallen under the most difficult and heart-breaking circumstances,” he said.

As of February 4, 2011, the DFA claims to have repatriated 102 stranded Filipinos, including 29 children from Jeddah. More recent reports reveal, however, that a large number of Filipino stranded workers are now in a new makeshift camp with their families they set up outside the Philippine Consulate in Jeddah.

The stranded Filipinos demand repatriation after losing their jobs. Many of them escaped from abusive employers who substituted their contracts or refused to pay their salaries. After being refused help from the Philippine consulate, they began living under the King Fahd Bridge and the Khandara overpass.

Casino said majority of the stranded Filipinos have no legal or valid documents, “But this can be remedied if our diplomatic post provides all relevant legal documents to Saudi authorities to facilitate the issuance of exit visas,” he said.

“It is a wonder why the consulate in Jeddah takes so long to do so. It is no wonder that the migrants’ group Migrante International and its chapters in Saudi Arabia tirelessly hound and call the attention of the Philippine posts in the kingdom to attend to the plight of our stranded OFWs,” he added.

Casino finished his privileged speech by exhorting the Aquino government to exert more effort in helping stranded OFWs and bring them home. He said that the consulate in Saudi Arabia should issue travel documents to the OFWs so those who want to return to the Philippines can get exit visas and fly home.

“Let’s go beyond nice sounding resolutions and platitudes and actually do something to bring home our distressed and stranded Filipinos in Jeddah,” Casiño concluded.