MANILA — Privatizing the National Food Authority (NFA) will endanger food security and lead to greater price destabilization. Transferring the NFA’s functions to the DSWD will put food security issues at the hands of big business.

This was the warning the Advocates of Science & Technology for the People (AGHAM), a group of scientists, said recently in reaction to reports that the Aquino government plans to privatize the NFA.

“Reducing government intervention through the NFA’s mandates in the marketing and trading aspect of the rice industry leading to a privatization track will only result in serious cases of rice crises similar to what we experienced in the past,” said agriculturist and Agham member Feny Cosico.

For a decade now, the government has been pushing for the NFA’s privatization but all attempts have been foiled by various cause-oriented groups including farmers’ organizations and anti-corruption alliances.

The Aquino government’s attempts at privatizing the food agency is packaged as part of reforms that involve the transfer of its function of providing subsidized rice to the poor to the Department of Social Welfare and Development (DSWD) and the regulation of grain trading to the Department of Agriculture (DA). Government spokespersons said the DSWD, with its National Household Targeting System, is better positioned to identify and directly reach indigent households. It will use the conditional cash transfer program for this.

“These are absurd reforms,” said Cosico. “With the DSWD as the lone authority in identifying indigent households, the country’s food security will be at the mercy of the private sector, the prime concern of which is to earn profits rather then provide social services.” 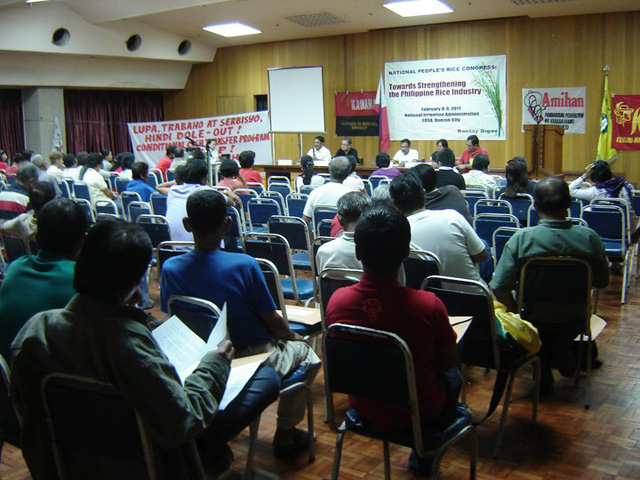 The Department of Budget and Management, in the meantime, has already given its say on the matter after Aquino’s ‘expo?e’ on the losses the NFA incurred because of corruption amounting to P 177 billion ($4.05 billion). Budget Secretary Florencio Abad fully supports the reduction of the agency’s involvement in the workings of the country’s rice industry, even calling the NFA’s function on regulation and trading as “a virtual monopoly.”

The transfer of NFA functions, Abad said, will allow the NFA to focus on its core food security functions: rice procurement from poor farmers and buffer stock management. He said the NFA will be conducting domestic rice procurement via charter of small farmers, and within an inventory of 15 days during harvest season and 30 days during lean months. NFA, in its buffer stock management function, will serve as a “buyer of last resort.”

“As the President has so directed, the private sector will be allowed to play a great role in the importation of rice. Discussions are ongoing as to the reduction of the current 40 percent tariff on rice,” said Abad.

Cosico retorted that Aquino’s expo?e on the rice scam should be dealt with legal action. “This anomaly should not be used as basis to strip the agency’s mandate and functions. The scam that transpired last year involving certain groups from Pangasinan who took advantage of the importation quotas is not enough basis to privatize the NFA,” she said.

She slammed the government’s move to remove the NFA’s functions, ‘It’s the systematic process of reducing state intervention by weakening government support through reduced budgetary allocations. After that, the government will declare the agency’s inadequacy to assume the role. This is the dictum of international financial institutions such as World Bank and Asian Development Bank. The NFA’s privatization is being justified as part of the Aquino regime’s flagship public-private partnership program,” she added.

The government has claimed that rice self-sufficiency is attainable in 2013, but Agham said this was nothing but a “pipe dream.”
“What is evident is that the Aquino government is continuing the implementation of wrong policies such as bogus land reform and superficial local agricultural support. These are the major roots of the crisis-ridden state of agriculture in the country. This is plainly an oxymoron when the government commits itself to follow a straight road but its actions say otherwise,” Cosico said.

Anakpawis Partylist Rep. Rafael Mariano pointed out the glaring inconsistencies in Pres. Aquino’s declarations and his policy actions. ?
“He keeps being optimistic about the country gaining rice sufficiency in a few years, on one hand, but remains silent on strengthening local rice production and putting a stop to the massive conversion of agricultural lands to non-agricultural and purely commercial use,” he said.

Instead of privatizing the NFA, Mariano said Aquino should study and support farmers’ proposals pertinent to the rice industry: House Bill 3105 or the Rice Industry Development Act (RIDA) pushing for the strengthening of the local rice industry as opposed to its privatization; and House Bill 374 or the Genuine Agrarian Reform Bill (GARB) pushing for genuine land distribution as opposed to the current CARPer which still allows big landlords to retain ownership of vast landholdings.

Another lawmaker has also expressed opposition to privatizing the NFA.

Butil party-list Rep. Agapito Guanlao said the NFA should stay as a government agency with a charter to help in the country’s food security efforts.

Guanlao who chairs the House Committee on Food Security said what the NFA needs is a change in management policies. “The privatization of the NFA may improve the agency’s cash position, but this would only deliver beneficial profits to the private sector and not to ordinary farmers and consumers. The current set-up of the NFA is still best for the country in its objective to meet food security objectives,” he said.

Bantay Bigas, an alliance advocating for safe and affordable rice, said prices of rice may soar once the state-run agency is placed in the hands of private entities. It laid down 10 alternatives to NFA privatization which it said the Aquino government should implement.

(2) Maintain the P8 billion ($183 million) subsidy of NFA for 2011 with additional budget of at least P15 billion (#343 million) for palay (rice grain) procurement from farmers to ensure availability of affordable rice for the poor without having to rely on artificially cheap imported rice;

(3) Increase NFA’s procurement equivalent to at least 25 percent of rice available at the local market;

(4) Provide modern tools and machineries for planting, harvesting, and processing of rice to improve and increase total rice production in the country;

(6) Scrap deregulation, liberalization and privatization in all its forms such as decoupling, rationalization, re-engineering and restructuring that leads to abandonment of NFA’s mandate of ensuring food security and stabilization of supply of affordable rice (food);

(8) End all land use and crop conversions;

(9) Unite for a clean and transparent governance towards attaining fully developed local rice industry and 100 percent rice self sufficiency and food security;