You Are Here: Home → 2011 → February → 15 → On Eve of Peace Talks, Groups Push for Release of All Political Prisoners

On Eve of Peace Talks, Groups Push for Release of All Political Prisoners

The GPH and NDFP will begin its formal peace negotiations today, Feb. 15, in Oslo, Norway. It is facilitated by the Royal Norwegian Government.

Members of the Samahan ng Ex-Detainees Laban sa Detensyon at Aresto (Selda), the organization for former political prisoners, and other human-rights groups marched toward the foot of Chino Roces (formerly Mendiola) bridge yesterday  to call  for the unconditional release of the 344 political prisoners in 67 jails and detention centers nationwide.

Fr. Dionito Cabillas, Selda secretary general, said the Philippine government should work for the immediate release of the political prisoners as a sign of goodwill in the continuation of the peace talks and for humanitarian reasons.

Based on the accounts of Selda and Karapatan, among the 344 political prisoners, 290 were arrested during the Arroyo administration, 27 under the Benigno Aquino administration, and 27 before Arroyo’s term.  Thirty one are women and one was a minor at the time of arrest. Fourteen are NDFP consultants and other persons protected under the Joint Agreement on Security and Immunity Guarantees (Jasig).

In a webcast forum with leaders of Bagong Alyansang Makabayan (Bayan) on Feb. 10, Prof. Jose Maria Sison, chief political consultant of the NDFP in its peace negotiations with the GPH, said that Jasig is superior to the legal process as the agreement acknowledges consultants and other participants to the peace talks. “The commander in chief has the power to order state agents not to violate Jasig. The NDFP consultants detained are victims of false charges, in violation of the Hernandez political doctrine,” Sison pointed out. 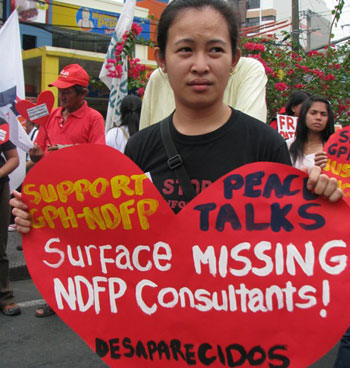 The Hernandez doctrine became part of Philippine jurisprudence when, in 1956, the Supreme Court ruled in the case People of the Philippines vs. Hernandez that a person who commits a political offense could be charged with rebellion but not with common crimes such as murder, arson, robbery, etc. It ruled that the act of rebellion would already include and absorb these crimes.

Cabillas added: “Their cases are no different from the case of the Morong 43, all ‘fruits of the poisonous tree.’ Some have been in jail for more than five years already and all are victims of the vilification and legal offensives of the Arroyo government and the state military and police forces against legitimate organizations.”

The Morong 43 refers to the 43 health workers arrested on Feb. 6 in Morong, Rizal. They were charged with illegal possession of firearms and explosives and were branded as members of the New People’s Army (NPA). On Dec. 17, 33 of the Morong 43 were released upon the dismissal of charges against them by local courts. Two were subsequently released December 28. The other five have remained under military custody at Camp Capinpin.

Cabillas cited Angelina Bisuna Ipong, now 66 years old, a peace consultant and a lay missionary in Mindanao, who was tortured, sexually abused and has been detained for six years now and Randy Feliz Malayao, a peace consultant from Cagayan Valley, who was abducted and tortured in 2008. Both Ipong and Malayao are among the 14 peace consultants who are still detained.

In a separate statement, Julius Garcia Matibag, national spokesman of the National Union of People’s Lawyers (NUPL, stated that they are joining the calls of all peace-loving Filipinos for the unconditional release of all political prisoners.  “The Aquino government should look at this as an outstanding opportunity to demonstrate good faith and goodwill in its quest for the resolution of the armed conflict in the country. It is also a basic issue of justice.”