“The armed conflict is deeply rooted in extreme poverty and social injustice suffered by the Filipino people and should be addressed by concrete measures A just and lasting peace cannot be achieved through abstract and empty peace rhetoric.” –Anakpawis Rep. Rafael Mariano

MANILA — As the Government of the Philippines (GPH) and the National Democratic Front of the Philippines (NDFP) began yesterday, Feb. 15, formal talks in Oslo, progressive lawmakers in the House of Representatives pushed Congress to start deliberations on legislative proposals seeking to uplift the social and economic conditions of farmers and workers across the country.

Starting today, February 16, House committees on agrarian reform and labor and employment would separately conduct hearings on House Bill 374 or the Genuine Agrarian Reform Bill (GARB) and House Bill 375, or the P125 across the board wage hike bill.

Anakpawis party-list Representative Rafael Mariano who is the main author of both bills said that if approved, “the twin measures will address the long-standing demands of peasants and workers and help pave the way for a just and lasting peace.”

“The armed conflict is deeply rooted in extreme poverty and social injustice suffered by the Filipino people and should be addressed by concrete measures A just and lasting peace cannot be achieved through abstract and empty peace rhetoric,” Mariano said.

Mariano said landlessness was at the core of extreme poverty of majority of Filipinos, and is among the greatest reasons behind the continuing social conflict.

“Imagine this — only 9,500 families comprise the country’s biggest landowners. They own 20 percent or 2,820,000 hectares of agricultural lands. This monopoly of land has caused widespread landlessness locking out our farmers from opportunities for decent livelihood. Unemployment and poverty levels in the countryside are highest in rural areas because 71 percent of poor Filipinos live there. They are denied access to education, health and other social services,” he said. 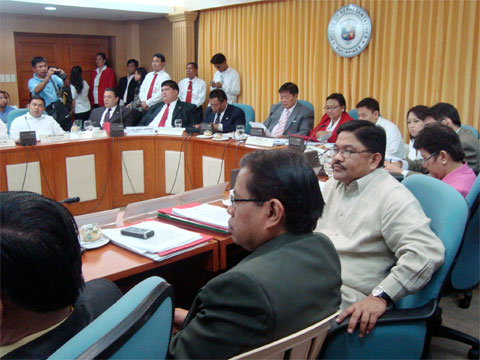 Government chief negotiator Alexander Padilla said this week’s talks would be the first in a series of meetings that would focus on the remaining substantive agenda agreed upon by the GPH and the NDFP. An agreement had been signed in 1998 pertaining to the first agenda: Comprehensive Agreement on Respect for Human Rights and Humanitarian Law. The remaining substantive agenda are socio-economic reforms, political and constitutional reforms, and the end of hostilities and disposition of forces. Both the NDFP and the GRP are aiming for the finalization of a Comprehensive Agreement Socio-Economic Reforms (CASER).

Mariano said if the Aquino administration is sincere in pursuing peace, Aquino must push for socioeconomic reforms by certifying House Bills 374 and 375 as urgent measures. He described the free distribution of lands to landless tillers as “the heart and soul” of a genuine agrarian reform program which is what HB 374 reportedly embodies.

“Landlessness is a fundamental problem that has not been resolved by all agrarian reform programs implemented in this country, including the Comprehensive Agrarian Reform Program (CARP). Past agrarian reform programs have failed because they were designed not to pursue social justice, but to protect the property rights of feudal landowners through the provisions of just compensation, exclusion, exemption and retention,” he said.

“The break-up of land monopoly and foreign control of our lands will liberate millions of farmers from feudal bondage and address the root causes of the armed conflict,” Mariano said.

According to the KMP, losses are high because of low-level development of post-harvest facilities and farm-to-market roads. Production costs are high but Filipino farmers do not have access to credit and production support. The group pointed out that these are the deplorable conditions that face small farmers, and they are powerless to deal with the highly-competitive global arena of trade liberalization which has intensified the dumping of foreign agricultural products in the domestic market. 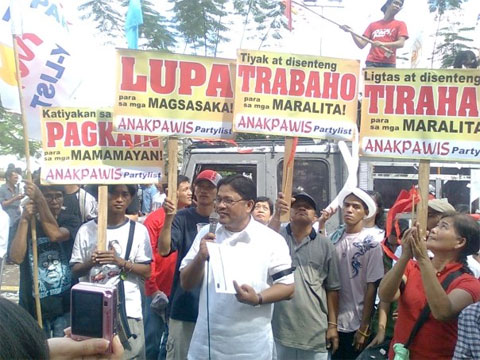 Anakpawis Rep. Rafael Mariano outside Congress: “Local agriculture is tottering on the brink of collapse” (Photo courtesy of Anakpawis / bulatlat.com)

“ Consequently, local agriculture is tottering on the brink of collapse due to the onerous weight of trade deficits, to the tune of $1.03 billion each year, it incurred since 1995,” said the KMP.

In direct contradiction to the statistics of the Department of Agrarian Reform (DAR), the KMP went on to assert that 70 percent of Filipino farmers do not own the land they till. In regions designated as “growth areas,” the rate of landlessness has risen to 80 percent because of massive dispossession of farmers in favor of economic projects and programs designed to smarten the country for foreign investments.

In stressing the need for a new agrarian reform program, Mariano also criticized the Comprehensive Agrarian Reform Program Extension with Reforms (CARPER) which he said worsened the anti-peasant and pro-landlord character of its predecessor, RA 6657 of the CARP of 1988.

“The worst and most vicious features of CARP like the non-land transfer schemes, land-use conversion and reclassification, leaseback agreements, and agribusiness venture arrangements remains intact under the Carper law,” the peasant lawmaker said.

“The social injustice our farmers have suffered does not only involve landlessness, poverty and the experience of frequent hunger. In their struggle to advance the cause of genuine agrarian reform and keep their lands from greedy big landowners, speculators and foreign corporations, they are being subjected to political repression, hamletting, forced evacuations, abductions and other violation of their human rights. The implementation of genuine agrarian reform can help put an end to social conflict,” he said.

On the other hand, the P125 wage hike bill, Mariano said will give immediate economic relief to workers facing stagnant wages and skyrocketing prices of basic commodities and services.

When the 15th Congress resumed last November 2010, party-list Anakpawis filed the bill for the legislated wage hike for third time.Workers led by the Kilusang Mayo Uno (KMU) have been active in lobbying for the passage of the bill in both houses of congress.

Independent think-thank IBON Foundation said the current P404 ($9.25) per day minimum wage in the National Capital Region amounts to only P242 ($5.54) in real value, when compared with the price index for the year 2000.

“People are struggling harder and harder everyday to survive, but corporations continue to rake in giant profits. Workers justly deserve a share of these profits because everything came from their hard labor,” said KMU executive vice-chairperson Joselito Ustarez.

KMU’s secretary general Roger Soluta, in the meantime, said to talk about peace is to talk about pro-worker and pro-people socio-economic reforms. “These reforms are necessary, and the government must prove its sincerity in putting an end to the armed conflict in the country by addressing the root causes, namely extreme poverty, injustice and exploitation of the poor and working people.Discussions on socio-economic reforms are crucial; they are for us, the most important part of the peace negotiations.”