From 2001 to 2009, profits in the Philippines increased by 552 percent but the average basic pay from 2001 increased by only 31 percent. — Ibon Foundation

Aside from the progressive labor center Kilusang Mayo Uno (KMU) and the lead proponent of the wage hike bill in Congress, the Anakpawis Partylist, union leaders from banks (such as the National Union of Bank Employees or NUBE and Bank and Financial Unions against circular 268 or BFU 268), agricultural workers (Unyon ng mga Manggagawa sa Agrikultura or UMA), the National Labor Union (NLU) and the Bukluran ng Manggagawang Pilipino (BMP), took turns in urging congress to legislate the wage hike now. 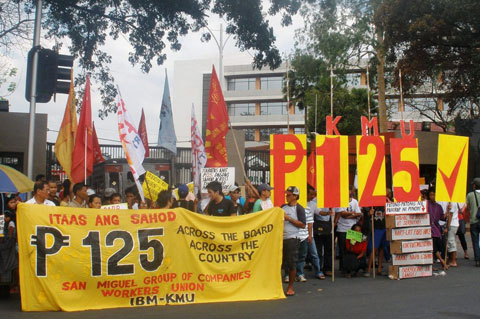 Labor groups, led by members of Kilusang Mayo Uno, held a protest action on Feb. 15 in front of the House of Representatives, demanding for a legislated across-the-board P125 wage hike. (Photo by Marya Salamat / bulatlat.com)

Even if HB 375 covers only private sector employees, the progressive government employees’ organization, COURAGE (Confederation for Unity, Recognition and Advancement of Government Employees), has also joined an alliance called KPMM to press for the immediate enactment of a substantial across-the-board wage hike for both private and public sector employees. “You cannot eradicate poverty through rhetorical propaganda,” Ferdinand Gaite told the government and the employers’ representatives at the hearing. “Poverty cannot be solved without concrete steps or direct solutions such as wage hikes,” he added.

The act calling for P125 ($2.88) daily across-the-board increase in wages of workers and employees in the private sector is principally authored by Anakpawis Rep. Rafael Mariano and supported by other progressive partylist groups in Congress such as Bayan Muna, Gabriela Women’s Partylist, Kabataan Partylist and Act Teachers’ Partylist.

“For the past eleven years workers have been demanding for a substantial nationwide wage increase. Beyond being a measure that will give immediate economic relief, a substantial wage increase is a matter of social justice,” said Anakpawis Rep. Rafael Mariano and his co-signatories to House Bill 375 in their explanatory note.

HB 375 was filed seven months ago on the day the 15th Congress opened. But despite the urgency of its call, it was tackled for the first time only last Wednesday by the House Sub-committee on Labor Standards. Representative Ronald Cosalan, chair of the said House sub-committee, even attempted to evade discussing the bill.

Rep. Cosalan said “RA 6727 should first be amended or modified before a nationwide wage increase be attended to”, because “we don’t want to be caught flatfooted in a technicality again.”

Cosalan was referring to the setback that the same proposed legislated wage hike had suffered in the 13th Congress, when the said bill had reached third and final reading, and in December 22, 2006 was even approved by the House through a majority vote and “by rights the bill was passed,” as Rep Mariano put it. But it was “recalled at the last hour on the flimsiest excuse that there was a need to review the Committee report that it was based on,” said Rep. Mariano, who described the move as a “blatant manipulation and disregard of House Rules”.

The labor leaders present at last Wednesday’s hearing refused to postpone legislating a nationwide wage hike until such time that RA 6727, or the law that created the Regional Wage Boards, was changed.

The regional wage boards were created in 1989 as the foremost government agency to decide on wage increases. But most of the time, these wage boards “only granted an insulting less-than-P20 wage increases. And such increases, if you can call these increases at all, prevented substantial wage increases in effect,” said Elmer Labog, chairman of KMU. He explained that the government has always used these meager increases granted by the wage boards to stop the workers from demanding a more substantial wage hikes. This, in effect, is what the House Sub-committee chair Rep. Cosalan had also tried to do in counterposing the proposed legislated, nationwide wage hike to the law that created the regional wage boards.

“Can we amend RA 6727? Fine! There are proposed amendments in Congress now modifying RA 6727. I don’t see any problem with Congress legislating HB 375. No reason why we spend too much time in the committee level. We fully support this bill (HB 375) and call for its passage,” said Dave Diwa, president of National Labor Union (NLU).

Most representatives of labor organizations at the hearing criticized the Regional Wage Boards as useless, and the wage hikes they granted, “if it can be called as hikes at all,” as too measly to count. “Everybody knows by now that the regional wage boards are inutile,” said the representative of BMP.

The labor leaders also excoriated in the hearing the Regional Wage Boards for utterly failing to rationalize wage fixing, considering that in the Philippines, there are now 300 to 500 wage rates, which contribute to problems of enforcement. “Cross one town and there are many wage rates,” said Diwa of NLU.

“We are also asking for a nationwide wage hike, not regional, in banks and in manufacturing and service industries, because our jobs are the same no matter what region we are in,” said Joseph Francia of NUBE.

“Even in past congresses – despite the Regional Wage Boards, or collective bargaining agreements, Congress may step in anytime to increase wages. This is important because we want to fulfil the Constitutional provision on social justice, in giving labor just wage and social justice. When other system is not working, for example the regional wage boards, then (HB 375) is needed,” said Rep Teddy Casiño.

According to Dave Diwa of NLU, the HB 375 in its present form is the same version passed in 13th congress. “There is no need actually for further debate – it has passed 3rd and final reading. Arguments for and against have been raised.” So why is Congress “tarrying?”

As in previous hearings in previous Congresses, last Wednesday’s hearings occasioned the release yet again of the “Business-owners’ age-old alibi that wage hikes would result to lay-offs, cost-cutting measures and ultimate shutdown of companies,” which, according to the authors of HB 375, had “proved to be nothing more than a blackmail excuse to deprive workers of much needed wage increases.”