You Are Here: Home → 2011 → February → 20 → Before Rabusa, There Was Pogoy: Court-Martialed for YouTube Exposé, Ex-Captain Decries ‘Prevalent Corruption’ in Military

Former Air Force Captain Joenel S. Pogoy, who spent two years in detention after being court-martialed for exposing corruption in the Air Force, says corruption in the military is worse than what is publicly known. The truth is, he says, many military officers — from the time they are still lieutenants to the time they become generals — are being taught by unscrupulous superiors to become corrupt.

MANILA — Former Air Force captain Joenel S. Pogoy was court-martialed and detained at the Villamor Airbase for two years for exposing corruption in the Philippine Air Force. Unlike the former budget officer of the Armed Forces of the Philippines (AFP) and now whistleblower retired Lt. Col. George Rabusa, Pogoy did not spill the beans in a public hearing of the Senate. He uploaded his exposé on  You Tube.

Unlike Rabusa, Pogoy was not protected from arrest. Nor was he under the witness protection program of the Department of Justice. According to him, his detention was questionable and the military violated his rights not only as an officer of the Armed Forces but  as a human being. (Visit Pogoy’s website.)

Captain Pogoy’s video exposé on YouTube sent him to jail.

In an interview with Bulatlat.com, Pogoy said he witnessed the corruption in the AFP right from the beginning of his service in 1999, after graduating from the Philippine Military Academy. “I was assigned in Walas, San Fernando, La Union, from 1999-2000 and there I noticed some irregularities. But I did not mind it because I thought  it was only my commanding officer then who did that sort of thing. ”

But when he was assigned to Fernando Air Base in Lipa City, Batangas, in 2002 for his military pilot training, he once again witnessed the same  corruption. “They began constructing three buildings for the Air Power Institute. Of the three buildings, only one was completed, the other two were left unfinished. The question is where did the money allocated for the construction of the other two buildings go? From what I understood, when a project is approved, a budget is allocated.” 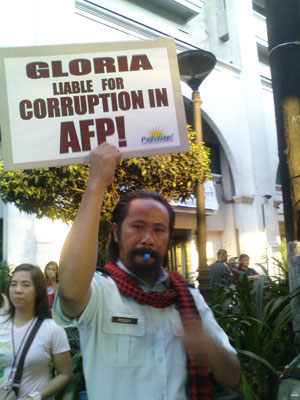 He also learned, said Pogoy, that the contractor is the son of the camp commander at the time. “When the commander was assigned to another unit, the project, as well as the contractor, suddenly disappeared.”

It became an eye opener for Pogoy. “I realized that it is different in the field. While we were studying at the PMA, we were trained to be disciplined, honest, and loyal to the service. These officials also came from the PMA, but it seems that many of those who come from the PMA become corrupt.” This is because, he said, as soon as they are assigned in the field, corruption is instilled in  them.

After his graduation, he was assigned to the Mactan Air Base in Lapu-lapu, Cebu, in 2002. There, he said, corruption was even worse.

“A Nomad plane number 53 crashed in Zamboanga because the two pilots sold the fuel for the mini transport aircraft. They came from Tawi-tawi going back to Zamboanga. Instead of fueling up the Nomad, they sold the fuel. The plane crashed because the plane ran out of fuel,” said Pogoy. 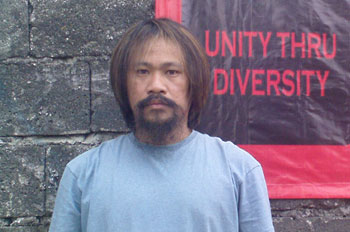 Luckily the two pilots survived. The case was investigated and it was proven that the two soldiers sold the fuel. However, the soldiers were not punished. “The commander decided to give them another chance. Why wouldn’t he? He also did it before. It is an open secret that aviation fuel is being sold and the proceeds of the sale line the pockets of officials. This is just a small form of corruption.”

Pogoy said several PAF planes  crashed because of corruption. But officials would make it appear that the crashes were caused by bad weather.

Pogoy lamented: “What they did is a crime. It was theft but they were not imprisoned. While I, who just made a video for my thesis, was jailed for two years. I did not commit any crime.”

Pogoy said in August 2008 a C130 #4593 crashed in Davao in which nine air force soldiers died. The PAF, said Pogoy, announced the cause as weather disturbance. However, Pogoy said, a subsequent investigation revealed that the C130 crashed because some of its parts had been “cannibalized” from other aircraft.  Pogoy said an aircraft like the C130 is reliable. The investigation report, which Pogoy  provided to Bulatlat.com, concluded that the weather condition in Davao then was not a factor in the crash of the C130.

The investigation also ruled out human error as a cause of the crash or an attack by one of the several threat groups in the area. “Based on the data gathered the aircrew were all qualified to fly the mission, in good shape, met all  Wing Safety Office requirements, and were not subjected to fatigue prior to that mission,” the report said.

The report strongly suggested that the use of parts in the C130 #4593 “cannibalized” from another aircraft may have been the cause of the accident. During its investigation, it established that the personnel who installed the “cannibalized” part that may have led to the crash was not authorized to do so. Pogoy said  “cannibalization” usually is a result of corruption, as parts that were supposedly allocated with a budget are often not bought. 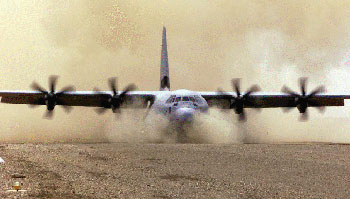 A C130 military plane, the same kind that Pogoy says were cannibalized by corrupt Air Force personnel and officials.

Before the crash, Pogoy said, the PAF and Asian Aerospace, based in Clark, Pampanga, entered into a contract for the repair of the said C130 #4593 and another C130 #4726. Pogoy said  anomalies surrounded that repair project.

“The maintenance experts from the 220TH Airlift Wing were the ones who did the repairs even if Asian Aerospace was contracted to do it,” said Pogoy. The project  was overpriced, Pogoy added, because the government paid $6.8 million (with an exchange rate of $1 = P 43.60) for the repair project but the contract was only for $2.3 million.

Pogoy said during one of their weekly command conferences, his Wing Commander, then Major General Nilo Deypalubos (Ret), vented  his frustration, saying that the reason why the repair project was awarded to the Asian Aerospace was that the owner of the said repair facility was one of the biggest financial contributors to the 2004 presidential campaign of former president Gloria Macapagal Arroyo. 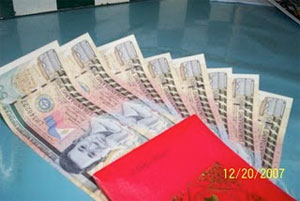 These photos, taken from Pogoy’s website, shows cash and appliances allegedly distributed to officers and men of the Air Force’s 220th Airlift Wing during their Christmas party in 2007.

Being a former officer, Pogoy admitted that corruption in the military is worse than what is publicly known and the truth is military officers, from the time they are still lieutenants to the time that they become generals, are being trained to be corrupt. This, he said, he experienced during his years of service.

What is revolting, he said, is the fact that what is being stolen is the people’s money, the taxes that people pay. “It is your money – our money from the taxes that we pay the government. And this is how they spend it while there are people who are dying because of poverty!” Pogoy said in one of his videos. And what angered him more is that he, who wanted to help in correcting this, became a victim of the military’s abuse of power.

”I am not against the armed forces; what I am against is their practice. We have to help our armed forces to undertake real reforms that is why I am exposing these anomalies,” Pogoy said during the forum.

Asked by Bulatlat.com why he was never tempted to just go with the tide and benefit from these corrupt practices, as Rabusa had admitted in doing, he replied, “No, I would never do it. My conscience cannot tolerate it.”