For Filipino farmers, filling a stage with actors and performers is hardly the best way to commemorate the culmination of more than a decade’s fight against the Marcos dictatorship. “It would have been better if President Aquino does something worthy of EDSA 1 such as announce the surrender of the Cojuangco family’s unjust claim on Hacienda Luisita,” Willy Marbella of KMP said.

MANILA — Wasting the legacy of the 1986 Edsa People Power uprising.

This was how Hacienda Luisita farmworkers and the Kilusang Magbubukid ng Pilipinas (KMP) described the administration of President Benigno S. Aquino III on the eve of the 25th anniversary of the popular revolt that ousted the Marcos dictatorship and installed Aquino’s mother, Corazon C. Aquino, to the presidency.

“The Aquino administration is in the thick of preparations for the February 25 anniversary of Edsa People Power. It even had tarpaulin banners and high-rise billboards put up all over the metropolis praising President Aquino’s mother and calling her an icon of democracy. For us farmers, it is very hard to accept how the incumbent government is packaging what happened 25 years ago because for us, the legacy of the uprising has been wasted,” said KMP deputy secretary-general for internal affairs Willy Marbella. 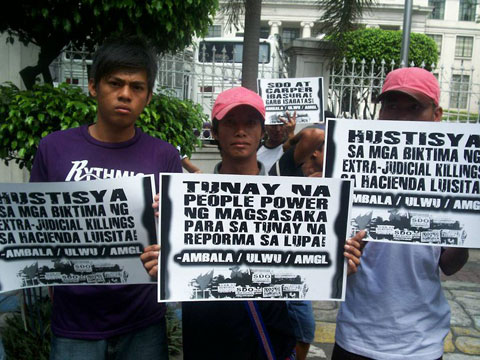 In a protest action in front the Supreme Court on February 22, Luisita farmworkers denounced the upcoming government-led Edsa celebration as a farce and sorry tribute to the essence of the People Power uprising. (Photo by Ina Alleco R. Silverio / bulatlat.com)

Marbella said that for KMP, the assertion that democracy and genuine freedom were achieved after Edsa 1 was a based on an illusion.

“Farmers believed the late president Cory Aquino’s promises that she would implement what the dictatorship did not – genuine land reform – but this did not happen. The Cory administration refused to put Hacienda Luisita under agrarian reform after the ratification of the 1987 Constitution. She instead pushed for the passage of the Comprehensive Agrarian Reform Program (CARP) of 1998 with the help of the landlord-dominated congress and saved HLI for the Cojuangco family,” he said.

Marbella said that 25 years after Edsa, Filipino farmers are still being denied the land they till and that the neglect suffered by the greatest majority of the population could not be called “democracy.”

“All these years and up to now, the government and its agencies tasked to uplift the plight of farmers have denied the right of farmers to own the land they till. Farmers continue to suffer untold poverty and want. In President Aquino’s own backyard, thousands of farmworkers in HLI live a hand-to-mouth existence and daily, the injustice worsens because the president himself cares nothing about what happens to farmworkers and their families,” he said.

“Filling a stage with actors and actresses, singers and theater performers is hardly the best way to commemorate a historic date, the culmination of more than a decade’s fight against the Marcos dictatorship. It would have been better if President Aquino does something worthy of Edsa 1 such as announce the surrender of the Cojuangco family’s unjust claim on Hacienda Luisita,” Marbella said.

Members of the Edsa Commission, formed by Malacañang to handle the government’s Edsa 1 commemorative celebration, have previously announced a long lineup of activities which began last February 17. An inaugural coffee table book titled Noynoy: Triumph of a People’s Campaign, detailing the rise of President Noynoy Aquino to power, was launched on the same date. 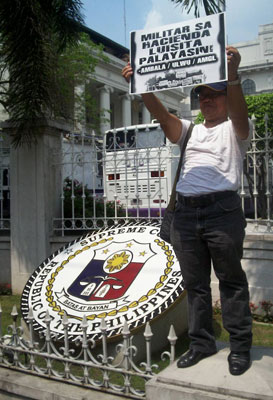 KMP’s Willy Marbella said that “the assertion that democracy and genuine freedom were achieved after Edsa 1 was a based on an illusion.” (Photo by Ina Alleco R. Silverio / bulatlat.com)

“Major” players of the uprising are expected to attend the celebrations on February 24 and 25, namely former president Fidel Ramos, Senate President Juan Ponce Enrile and other members of the military. All the uniformed components of the government, the AFP and PNP, and the training institutes such as the Reserve Officers Training Corp (ROTC) will also be part of the opening flag ceremonies.

On February 25, from 7 a.m. to 12 midnight, the northbound lane of Edsa will be transformed into a party-ground as a food fair will be put up and Edsa committee member singer Ogie Alcasid spearheads the launching of the Tatak Edsa program.

The Edsa 1 activities will be capped by a fun-run on the February 27. Called the “People Power Run”, the activity will be led by the Ninoy-Cory Aquino Foundation and will cover a route from Ortigas to Green Meadows to the C5. Organizers also said that there will also be simultaneous runs in Cebu City, Zamboanga City, Dipolog, Angeles City, and the Bicol Region.

Alcasid said a song for the Edsa anniversary will be launched titled “Narito Ako Pilipino.” It will be sung by various artists.

Other officials of the Edsa commission estimate an attendance of 30,000 to join the activities, 3,000 or 5,000 of which are from the military.

The chairman of the Alyansa ng mga Magbubukid sa Gitnang Luzon (AMGL) also slammed the celebrations, saying that the Aquino administration was sugarcoating its real anti-farmer and anti-land reform character by “resurrecting” the ghost of Cory Aquino and presenting her as an icon of democracy.