MANILA — “A victory for the Filipino music industry.”

This is what Bayan Muna Representative Teddy Casiño said in the aftermath of the passage of House Bill No. 3787 at the committee level. The House Ways and Means Committee recently approved the said bill, which Casiño sponsored, titled “Local Music Industry Incentive Act of 2010” which, if passed into law, aims to exempt concerts of Filipino artists from amusement tax.

Casiño said Bayan Muna’s proposal seeks to help the local music industry cope with the negative impact of piracy and the continued entry of foreign performers who hold concerts in the country.

“According to the Philippine Association of the Record Industry (PARI), piracy levels have reached 83 percent. In the meantime, the International Intellectual Property Alliance had ranked the country as fifth in global and second in Asian music piracy. In 2009 alone, we lost around $112.2 million in audio CD sales. This seriously affected record sales,” he said.

Casiño said the music industry has continually declined from a record high of P1 billion in sales in 2000 to several hundred million pesos to date. To adapt with the changes, he said the standards for awarding gold or platinum records have also been changed.

“The 20,000 quota for a gold record had been cut in half to make it more attainable. This has not only affected the economic aspect of the field — with producers and record labels closing shop, artists not earning enough — but also the creative aspect. Artists are advised to sing old songs to ensure that the albums would sell instead of making their own or employing composers to make new original Filipino songs that may or may not sell,” he said.

Besides dealing with the failing record production industry, Casiño said, Filipino artists have also been faced with the challenge of competing with foreign acts and high production costs.

“On the whole, it has been tough going for local artists. Many of them rely on holding their live performances to make a living. Both producers and artists, however, are burdened by multiple taxes, from value-added tax for services and materials, to the amusement tax paid to local governments,” he said. 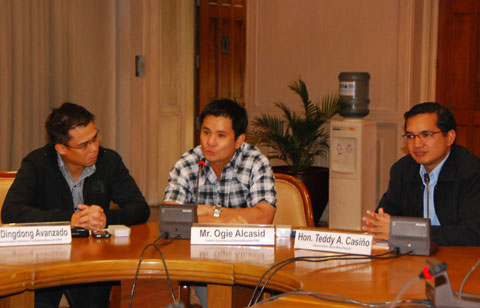 In a roundtable discussion Casiño had with the OPM, PARI, various producers, artists and record labels, it was revealed that the rate of amusement tax differed depending on the city or municipality. No refunds are also made based on actual ticket sales. Some were asked certain amounts of money based on estimated ticket sales, regardless of the law’s provision that it be computed from the “gross receipts from admission fees.”

“It came out that the high and arbitrary amusement taxes being paid by concert artists and producers make it difficult for them to earn enough, or even to just break even. It has been a very discouraging situation for producers and managers — they think twice or thrice before organizing live performances. Some scrimp on production costs, and this has the effect of stifling artistic creativity and, more pragmatically, lowering employment opportunities in the industry,” Casiño said.

For these reasons, Casiño and the OPM put together the idea of seeking amusement tax exemption for local artists promoting original Filipino music. They also sought to remind government units to implement the law properly and to abide by the 10 percent ceiling on amusement taxes, as set by the Local Government Code. According to the law, taxes will be taken from the gross receipts of admission fees, refunding whatever was given in advance.

In the Bayan Muna proposal, amusement tax derived from concerts of foreign artists will be earmarked for workshop subsidies badly needed by our local theater groups, as well as trainings and workshops for artists and composers to encourage the creation of original Filipino music.

The proposal states that operas, concerts, dramas, recitals, painting and art exhibitions, flower shows, musical programs, literary and oratorical presentations, including pop, rock, or similar concerts will be exempted from amusement taxes for as long as they feature mainly Filipino artists and Filipino compositions.

As a matter of implementation, the measure instructs that the National Commission for Culture and the Arts, different music industry guilds and organizations, as well as producers and other stakeholders, to issue the necessary rules and regulations if and when the bill is passed into law.