After watching the video, which was widely circulated on Facebook, many expressed shock and outrage, denouncing the Armed Forces of the Philippines as human-rights violators, while others simply commented how difficult it is to look at the video and not cry with anger.

MANILA — A week ago, a video showing members of the military torturing what appeared to be civilians hogtied and blindfolded shocked the Facebook community in the Philippines. Four civilians were shown curled in fetal position on open, grassy ground strewn with coconut husks.

Lasting one minute and 53 seconds, the video showed soldiers in full uniform and bearing long firearms alternately kicking and stomping on the civilians’ abdomens and backs as they lay curled on the ground. The civilians could be heard moaning as blows landed on their bodies and the soldiers cursed at them. One of the civilians was hauled upright, and perhaps because of the pain he suffered from the blows, was unable to stand up straight. His inability to obey the soldier’s exhortations that he stand up prompted the soldiers to punch him repeatedly. 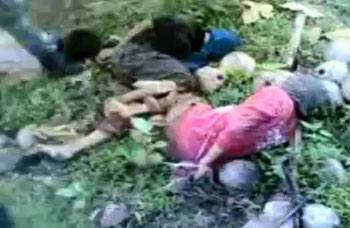 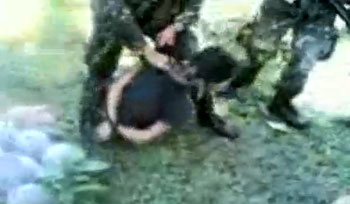 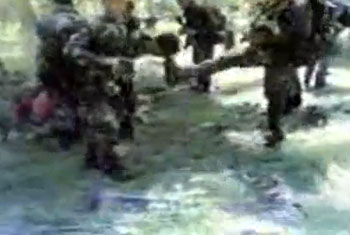 The video shows members of the military torturing civilians who were hogtied and blindfolded. (Video grabs by Bulatlat.com)

The video which appeared to have been shot with a camera phone was widely circulated on Facebook and those who viewed and forwarded it to their contacts expressed shock and outrage. Many denounced the Armed Forces of the Philippines (AFP) as human-rights violators, while others simply commented how difficult it is to look at the video and not cry with anger.

The video has also apparently reached the attention of the AFP leadership. Last weekend, officials said military investigators were already checking the identities of the uniformed men.

AFP spokesperson Brig. Gen. Jose Mabanta said the military establishment felt concerned about the video. “We have said that we will not do these abuses, then we see it right in our faces. We want to know when and where it happened — if it actually happened,” Mabanta said in an interview with Agence France-Presse.

Col. Domingo Tutaan, who heads the AFP’s human-rights office, said they will also try to find out what happened to the supposed victims. He said their investigation is aimed at determining the culpability of the soldiers if and when there is culpability. “We will file immediately a case in accordance with the military justice system,” he said.

Navy spokesperson Capt. Giovanni Carlo Bacordo said the soldiers in the video were wearing uniforms that were issued to the Philippine Marines three or four years ago.

Agence France-Presse reporter Mynardo A. Macaraig sent a request to the Facebook user who posted the video, named Bautista Peter John, to give more details regarding the video and where it was shot, when and by whom, but Bautista apparently did not provide more information after promising to do so.

There were also comments who denounced the video as pure fabrication or “propaganda,” “Let’s be fair and square and lets not conclude immediately I for one had observed the Military and the NPA [New People’s Army] at close range and i know for a fact na parehas ang mga yan na may mga kalokohan pero wala pa rin nagsasabi until now kung ang video na to ay totoo or just a propaganda video.”

Observers said that, if the video was anything to go by, the AFP treats its POWs (prisoners of war) much, much worse than it does civilians.

A few days after the video came out, the National Democratic Front of the Philippines (NDFP) in Mindanao released a statement congratulating the NPA in the Southern Mindanao Region , particularly those of the Conrado Heredia Command-Front 20, the Front 25 Operations Command and the Wilfredo Zapanta Command-Front 18, for having carried out the speedy and safe release of three war prisoners.