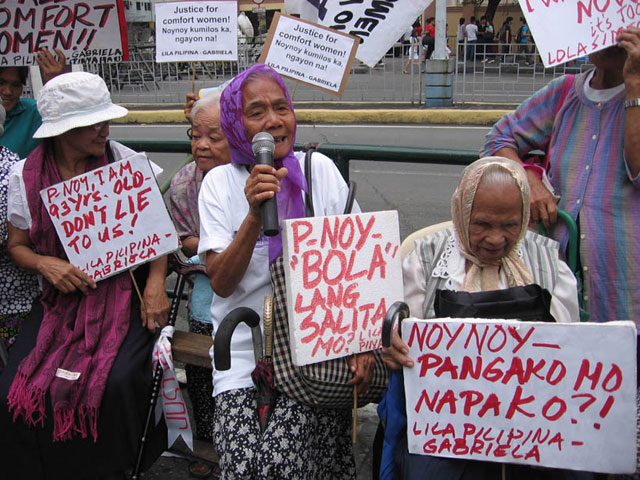 MANILA — The lolas (grandmothers) of Lila Filipina, an organization of former “comfort women,” stormed the Japanese Embassy in Manila on Wednesday to demand justice from the government of Japan for the crimes they committed during World War II. The lolas are calling on the Japanese government to formally acknowledge and accept historical responsibility and to sincerely apologize and make amends by providing just compensation for the victims.

The lolas proceeded to Don Chino Bridge near Malacañang gate and brought with them a letter addressed to President Benigno S. Aquino III, asking why he failed to fulfill his promise of obtaining any measure of justice for them.

“Like in many pertinent issues confronting Filipino women such as spiraling prices of commodities, Aquino failed to give decisive, much less effective action on the demands of the lolas,” Lana Linaban, Gabriela secretary-general, said. 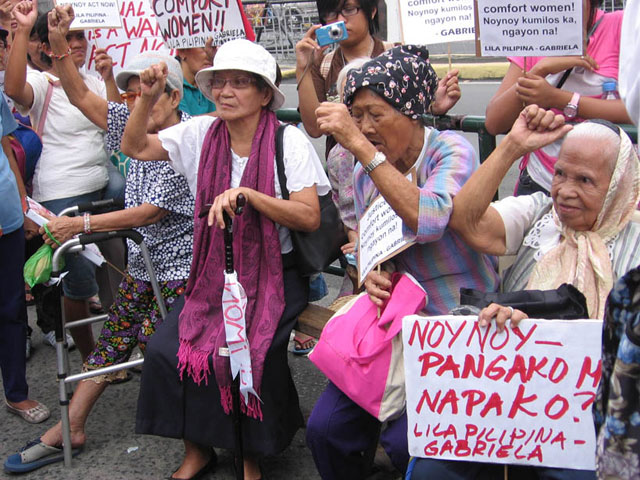 According to Lila Pilipina, President Aquino, in November 2010, assigned the next ambassador to Tokyo the task of obtaining an apology from Japan. Aquino was also quoted as asking the Congress to authorize him to appropriate public funds for compensation to comfort women.

The lolas expressed their dismay over the slow pace of justice. “Noynoy (Aquino), the lolas are in their sickbeds and deathbeds already. Do what is right and as head of state, ask the Japanese government to own up to their responsibilities,” said Rechilda Extremadura, executive director of Lila Pilipina.

Gabriela said the nationally-coordinated mass action on March 8, commemorating International Women’s Day, will include justice for comfort women as one of the urgent demands for women. (Photos courtesy of Gabriela /