Finding it difficult to cope with the spike in prices of oil and rates of electricity? These NGOs have been working with their partner communities in developing renewable energy sources to power their needs and their development.

CEBU CITY — It is imperative as well as timely to put an end to our dependence on environmentally destructive and expensive energy sources like coal-fired power and other fossil fuels and push for the utilization and development of indigenous and renewable energy like hydro, wind and solar.

Cinches said the summit is very significant in view of the worsening climate change and environmental degradation bringing deadly impact such as heavier rains, flash floods, rise in sea-levels, spread of infectious diseases, and scarcity of resources with heavy reliance on unsustainable fossil fuel for energy needs.

Visayas islands especially Cebu, Samar, Leyte, Negros Oriental and Iloilo were hardest hit by flash floods and landslides in December 2010 up to January this year, resulting to damages in agricultural crops, destruction of drainages and roads, dislocation of villages, dozens of lives lost, and various economic and social activities interrupted. Government and unofficial sources estimated the damages between P 60 – P 80 million ($1.386 million to $8.49 million).

Cinches pointed to the government’s bias for local big business and multinational interests as chiefly to blame for the destruction of the environment, monopoly of energy sources, and the further marginalization of the poor.

Government’s commitment to the democratization of energy sources and promotion of renewable energy like wind, solar and water, remains a lip service. In fact, it has already been two years since the passage of the Philippine Renewable Energy Act, yet the Implementing Rules and Regulations (IRR) remain un-crafted,” he added.

Meanwhile, he noted, multinational companies led by US, Canada, China, Japan, Australia, India, South Korea, in tandem with local big businesses, are vying to control renewable energy given its increasing popularity and acceptability as alternative to high cost of traditional power sources. 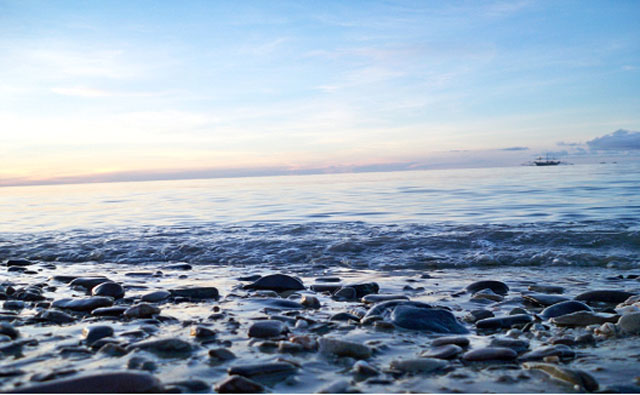 This beautiful beach in far north Cebu will soon be unfit for human enjoyment if the current tide of environmental destruction continues. (Photo by Karl Ombion / bulatlat.com)

“They know that people, rich and poor, are eyeing renewable energy as their best alternative because they are already hard pressed by the cost of commercial power services. Soon the renewable energy market in the country will grow several fold. If we don’t implement measures to mitigate the risk of monopoly, our people would soon end up multiplying their woes over cost of energy and power utility services.”

With these issues converging to create disturbing effects, key organizers of the summit are in consensus that a fundamental policy shift is necessary.

Policy serves as the overall framework, the core of any model.

The model does not measure people’s progress in terms of increases in Gross National Product and Gross Domestic Product, or by any other conventional means developed by elite technocrats and planners. “It has already been proven bankrupt, oppressive and exploitative. It does not reflect the actual state of life of the people, the actual resource status of a country,” Cinches said.

The “Green Economy” model simply pushes for rapid, but low risk and less-cost alternatives to the destructive ways in which society has carried out the development projects that exploit the environment and marginalize the poor.

Concretely this promotes the likes of wind, solar and hydro energy sources, which have already been initiated in some rural and upland communities.

“Renewable energy sources are critical in any development, but to make them truly sustainable, it should be linked with other fundamental issues related to land security of the people, diversified and organic production, and respect for rights of the people, especially our food producers, the farmers, farmworkers, fisherfolk and all other related to the entire production process,” Cinches stressed.

‘Green Economy’ is simply democratizing resources and wealth and making them sustainable for the next generations of people, he pointed.

In the data made available to Bulatlat, the use of renewable energy technologies in the Philippines is steadily growing as more people both in off-grid and urban areas are becoming more conscious of their role in conserving energy and advocating for a clean environment.

According to the Department of Energy, biomass, solar and wind will be among the major sources of energy for the next decade, accounting for more than a third of the country’s total energy demand. From 81.5 MMBFOE in 2003, the absolute level of these sources will increase by 2.8 percent annually reaching 104.1 MMBFOE in 2012. Biomass will continue to take the lion’s share of the total at 99 percent. Meanwhile, the contribution of solar, wind and ocean will reach 0.6 MMBFOE in 2003 rising to 1.7 MMBFOE in 2007 and 3.0 MMBFOE in 2012.

Demand for solar and wind energy sources is foreseen to grow with the implementation of the program to invigorate the market for solar water heaters and locally fabricated solar dryers and wind pumps. On the other hand, biomass resources will continue to dominate total non-power demand for renewable energy, increasing from 40.43 MMBFOE in 2003 to 47.46 MMBFOE in 2012.

The household sector will remain the largest user of these energy forms particularly fuelwood, comprising 66.9 percent of the total biomass consumption for the ten-year period. From a level of 57.6 MMBFOE in 2003, consumption of the sector will increase to 68.4 percent in 2012.

Biomass would still be the most important fuel for rural households particularly in their cooking and agriculture activities such as crop drying. Solar and wind, on the other hand, would be utilized for lighting, water pumping and operation of small appliances.

Renewable Energy Need Not Be Expensive

Cinches however argued that renewable energy need not be expensive especially for the poor communities and organizations despite its initial high cost of investment.

“This issue is particularly true with solar panels, because we don’t manufacture them in the country; but not in the case of other renewable energy technologies like micro hydro turbines, and wind power,” he said.

The key is when we start small and more community-oriented this big talk about renewable energy technologies would just become a mass initiative and less expensive, he added.

In fact, a survey conducted by Bulatlat revealed that while renewable energy remains on the board rooms and drawing boards of top power planners in the country, some grassroots based and oriented NGOs, people’s organizations and networks like Central Visayas Fisherfolk Development Center (Fidec), Foundation for Philippine Environment, Sibol ng Agham at Teknolohiya, Cebu Coalition for Food Security, Alternative Indigenous Development Foundation Incorporated (AIDFI) and Center for Environmental Concerns (CEC), among others, have already been into pioneering work on this initiative.

These groups have technology scientists, innovators and engineers who have been doing extensive research and development, actual installations and innovations, and skills transfer trainings to communities.

Some of them have not only developed economically viable livestock production and organic farming, but have also developed renewable energy power sources for their partner communities such as solar lighting; biogas system for pig projects which produce methane gas for household cooking fuel and electricity; solar-powered water systems; small-wind power charger producing electricity or for extracting water.

Another is the case of AIDFI, a multi-awarded Bacolod-based NGO, which recently won another award for its innovative hydraulic ram pump water system. It popularized its water system and provided water to more than 150 communities benefitting 30,000 or more households. It’s a feat that no other development NGO has achieved, or even ventured into. First, because it is a work where impact takes sometime to be felt and seen and therefore cash flow is slow. Second, it requires a deep commitment to rural development and environmental conservation. Third, it is something that requires a combination of social science and technical skills.

The Central Visayas Renewable Energy Summit on March 7-8 in Cebu City, aims to develop mechanisms and infrastructures for enabling market for renewable energy; map resources and potentials for renewable energy development, and to formulate action plan for promoting renewable energy as the best alternative to heavy and unsustainable reliance on destructive energy sources.