MANILA — The youth group Anakbayan is not holding its breath that the new administration of the Armed Forces of the Philippines (AFP) will do wonders to the country’s human rights situation. In the meantime, the group Bagong Alyansang Makabayan (Bayan) and Karapatan want the new military leadership to deal with the extrajudicial killings of activists.

Last weekend, during the graduation rites at the Philippine Military Academy in Fort del Pilar in Baguio,  President Benigno Aquino III named Lieutenant General Eduardo Oban Jr. as the new AFP chief of staff. He will be the  42nd AFP CoS replacing Gen. Ricardo David Jr who is slated to retire on March 8.

Oban is an officer of the Philippine Air Force and, prior to his appointment, he was the deputy chief of staff of the AFP. Before entering the PMA where he eventually graduated with honors, he studied at the University of Sto. Tomas. 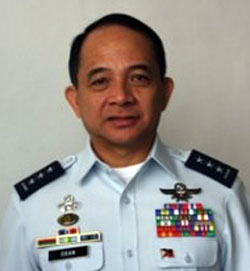 The group called the term of newly appointed AFP chief of staff Eduardo Oban Jr. as “business as usual” given the continuing human rights violations and militarization in the country today.

Vencer Crisostomo, Anakbayan national chairman noted that during the rites confirming Oban’s appointment, there was  no mention of the pressing issues which confronts the military, primarily the continuation of human rights violations. Crisostomo said there was no mention regarding the role the AFP should also play in the peace process.

“Not even a single sentence has been said about the continuing murder of government critics under the supposedly ‘new’ government, much less any talk about making amends” said the youth leader.

One Killing Per Week

According to Karapatan, 40 activists and sympathizers have been murdered by suspected military elements since President Aquino took power, or an average of more than one extra-judicial killing per week.

Only last week, two political activists and one of the victim’s sons were killed.  Shot to death by suspected elements of the military were Bayan Muna activist Rodel Estrellado of Malilipot, Albay  and B’laan tribal chief Rudy Dejos and his son Rody Rick Dejos.

“Oban has obviously left out human rights among his priorities. Although the Oplan Bayanihan purports to respect human rights, there are now 40 victims of political killings since Aquino took office, ten of whom were killed since the AFP’s Bayanihan was launched.  Suspected perpetrators are elements of the AFP and other state-sponsored forces.  Gen. Oban should look into these,” Roneo Clamor, Karapatan spokesman, said.

“This constitutes not just a major violation between previous agreements between the two, but a deliberate act of sabotage to make the peace talks fail,” Crisostomo said.

The NDFP has already condemned the arrest of one of its consultants Allan Jazmines  in Baliwag, Bulacan by combined military and police forces earlier last month. According to the NDFP, the arrest of Jazmines is in “gross violation” of the Joint Agreement on Safety and Immunity Guarantees (Jasig). Jazmines is a holder of a JASIG document of identification issued by the NDFP.

Jazmines is the second NDFP consultant arrested in less than two months in violation of standing agreements. Last 4 January, the AFP arrested NDFP consultant Tirso “Ka Bart” Alcantara in Quezon province. Alcantara continues to be detained despite promises by the GPH negotiating panel to respect the JASIG and take steps for his release.

For these reasons, Crisostomo was critical of any new change in the military’s orientation under Oban.

In the meantime, the Bayan urged Oban to put a stop to the extrajudicial killings of political activists in the country.

Reyes said President Aquino must give clear and unequivocal orders to General Oban to stop the recent wave of extrajudicial killings.

“Human rights violations have continued from the Arroyo regime to the Aquino administration. Unfortunately, it does not get much attention from the president, unlike say, corruption in the military,” he said.

Reyes said Bayan would like to see Aquino and the new chief of staff investigate human rights abuses in the same way they are investigating corruption of the AFP.

“We’d like to see the same attention, from the executive and legislative branches, given to the cases of enforced disappearances and torture, which continue till this day. We’d like to see the Senate investigate generals who have been implicated in extrajudicial killings then and now,” Reyes said.’

“Oban is duty-bound to weed out the human rights violators among the 130,000-strong AFP troops if he really wants reforms.  So-called ‘civil-military operations’ for basic services to the communities are better left to government agencies and the 16-year old business of AFP modernization initiated by Congress in 1995 has only squandered the people’s money. Plunder of the nation’s coffers is bad enough. Perpetuating impunity and placing critics in coffins is worse,” Clamor said.

At the start of the year, the Armed Forces adopted the so-called ‘Oplan Bayanihan’, which calls for the elimination of the perception of poverty, rather than actual poverty elimination as its ‘framework’ in defeating the communist insurgency.

Crisostomo said the same theme was repeated in Oban’s speech during the turnover ceremonies, where he called for an end to ‘internal security threats’ without actually mentioning the important role of poverty alleviation in the said efforts.