On the afternoon of February 28, Manila preschool teachers trooped to the DepEd main office in Pasig in hopes that they will be able to hold a dialogue with Sec. Luistro. They were joined by officials of the ACT, the Manila Public School Teachers Association (MPSTA) and the Philippine Public School Teachers Association (PPSTA) who also had reservations regarding the contractualization scheme the DepEd was proposing.

Luistro was unavailable, but an undersecretary, Ms. Yolanda Quijano obliged the teachers. With Estelita Estigol of the Bureau of Elementary Education, Quijano sat down with the teachers in a dialogue that lasted for two hours.
Quijano expressed confidence that the DepEd was well prepared to launch the kindergarten program nationwide this coming school year beginning June. She said that the DepEd has made sure that it will be able to meet the challenges of increased ernrolment of kindergarten pupils and the need for additional classrooms and facilities.

“We continue to find means and ways to ensure that the new program will be implemented well, ” she said.
Upon prodding of the teachers to explain how exactly it is that the DepEd is prepared, however, Quijano said that the DepEd, among other measures, is negotiating with local government units to give their support for the program and allot funds for it and the teachers within the areas of their jurisdiction. She also said that the DepEd was going to utilize new schemes and ‘technologies’ to make up for the lack of classrooms, teachers and facilities.

Quijano admitted that there was still no budget for the kindergarten program in the 2011 General Appropriations Act (GAA), but brushed aside fears that the absence of funds will be detrimental to the implementation of the national preschool program. 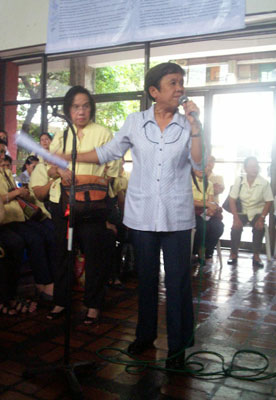 For their part, officials of the ACT and the MPSTA remained unconvinced that the DepEd was prepared for the coming school year.

ACT second vice-president Benjie Valbuena said that it was already February, but the DepEd was still unable to present a solid curriculum for the kindergarten program. “And they admit that there are still no funds for the program. It’s not enough that they promise there will be school rooms or facilities or new teachers by the time June comes along. Nothing can come from nothing, and we remain apprehensive as to how our teachers will be able to cope with the increased volume of new preschool students come school opening,” he said.

MPSTA president Merlinda Anonuevo in the meantime said that it would be better for the DepEd to postpone the implementation of the new preschool program because it was obviously unprepared.

“It’s most worrisome how the DepEd is so confident that it can undertake such a humongous new program but at the same time it is unable to state in black and white that there is enough funds to back it. Can they build enough new schoolrooms and enough facilities by June? It would be most unfair if in case things go wrong during the school opening and it’s the teachers who will be blamed,” she said.

In the meantime, it’s not just the threat against the quality of education that Manila preschool teachers are worried about.

In Manila, the local government is responsible for the salaries of the teachers. This has been the system since1974 when the city government first implemented the kindergarten program initially as a special project. De Ocampo explains that from the beginning Manila kindergarten teachers’ salaries have been the same as their counterparts in the higher levels in the national government school system, but they do not enjoy the same benefits as the national government teachers. For instance, they do not have chalk allowance and they are not given many of the bonuses their counterparts receive.

In 2008 and 2009, Manila kindergarten teachers received a performance bonus of P10,000 every December and they were made to understand that they would be given the same at the end of every year. In December 2010, however, the city government under Mayor Alfredo Lim announced that there would be no bonus because the LGU was forced to shoulder new expenses related to the establishment of a public hospital in Sampaloc.

It also came out that the city government also lost in a case filed against it by business groups and entities wherein the business community protested against the imposition of a massive tax increase. The case was filed during the previous administration under Lito Atienza. The current administration under Lim has reportedly been forced to stop collections from business enterprises as part of legal arrangements.

“It’s not been explained to us in complete detail, but what we understand was that kindergarten teachers in Manila are at the losing end because our bonuses were put on complete hold,” de Ocampo said. Many teachers, she said, were demoralized.

Now, she says, with the plans of the DepEd to implement a national kindergarten policy, it was not clear what will happen to preschool teachers in Manila.

“Will all of us be absorbed by the DepEd and the national government? If yes, will our status remain the same, meaning those of us who are on Teacher 3 level remain on that level if and when we’re absorbed?,” she asked. She said that worries were rife that many Manila kindergarten teachers will be left out in the cold.

“We find it hard to accept that the national government is offering only P6,000 to new kindergarten teachers who will also be contractual employees to boot. Neither do we know if we have to apply for new positions under the new set-up,” de Ocampo said.

De Ocampo said that the Manila Division of City Schools has not been exactly helpful in helping kindergarten teachers under its jurisdiction understand the situation. “We don’t know what our options are – in fact, we don’t even know if we have options. What we are certain of, however, is that we will assert our right to job security and fight to uphold the dignity of our profession. We’re doing this not only for ourselves, but for our young students and the future generations of preschool children,” she concluded.

This story has been updated to reflect the following correction:
1) The name of the MPSTA president is Merlinda Añonuevo, not Berlinda Anonuevo.