Because there seems to be no end to the increases in the prices of oil products, people’s organizations are calling for a nationally-coordinated strike on March 31 saying that oil companies are lying when it cites world crude prices in justifying increases in local pump prices.

Various people’s organizations are calling for comprehensive steps, including the conduct of street protests and strikes to stop the oil companies from imposing more price increases. People’s groups are marking March 31 as a “national day of protest” against oil price hikes.

Earlier this week, youth group Anakbayan held a protest in Quezon City against the ninth oil price hike of the year, calling the increase unjustifiable even by what they called “the Big 3’s unreasonable standards.”

Oil companies Shell, Petron, Chevron and small players are expected to take advantage of the spiking world crude oil prices to further impose frequent price hikes to the disadvantage of consumers. Oil prices have increased four times in the past two weeks. Last Tuesday, oil companies raised prices of gasoline and diesel by P 1.50 ($0.03) per liter and kerosene by P 1.25 ($0.028) per liter, the third time in eight days, making the accumulative increases in the prices of gasoline by P 6.75 ( $0.15) per liter for gasoline and P 6.50 ($0.148) per liter for diesel since January this year. 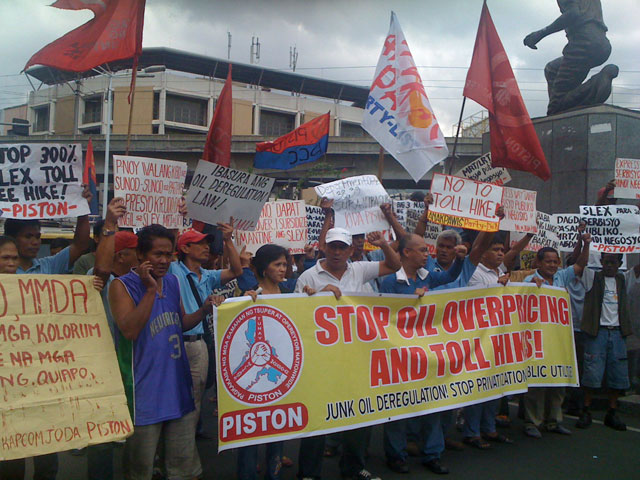 “There is no basis at all for the latest oil price hike, or for any this year for that matter, seeing that local petroleum products remain overpriced by the end of 2010,” said Anakbayan spokesperson Vencer Crisostomo.
Crisostomo said the three biggest oil companies in the country continue to overprice their products. He explained that oil firms frequently cite increases in crude oil’s world market price and the lowering value of the peso to the dollar as reasons for hiking their prices.

“The oil companies always have a stock of oil that is good for three months. The products oil firms are selling at ‘new prices’ comes from a stock which is actually lower priced. It’s transparent how they’re cheating the public,” he said.

“They don’t actually buy their crude oil from the world market. The ‘Big 3’, which are local branches of global oil corporations, get their stocks from their mother companies,” he said.

In the coming days, the public expects to see more protests against the price hikes.

On Tuesday in the Bicol region, the transport group Condor (Concerned Drivers and Operators for Reform), an affiliate of the Pagkakaisa ng mga Samahan ng Tsuper at Opereytor Nationwide (Piston, Unity of Organizations of Drivers and Operators Nationwide) led a transport strike in the provinces of Sorsogon, Catanduanes, Albay, Camarines Norte and parts of Camarines Sur. 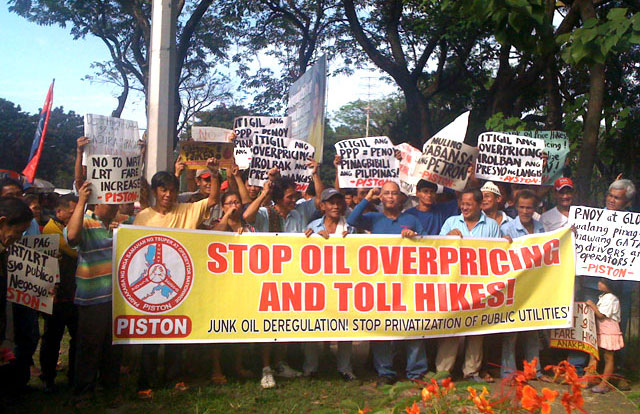 In Calabarzon (Cavite, Laguna, Batangas, Rizal and Quezon), the Southern Tagalog Region Transport Organization (Starter-Piston) said it has been gearing for twin actions on March 19 and 31 to protest the oil price hikes.

In the meantime, the fisherfolk alliance Pambansang Lakas ng Kilusang Mamamalakaya ng Pilipinas (Pamalakaya) has issued the call to its members all over the country to go on strike on March 31.

Pamalakaya said that more than 313,000 small fishermen across the country who operate small fishing boats are outraged by the unbridled increases in the prices of petroleum products.

Pamalakaya chairman Fernando Hicap said that March 31 will be a “national day of outrage” against the exploitation of oil companies and the Aquino government’s inutility in stopping the abuses of the oil cartel.

Hicap said Pamalakaya has already issued a memorandum to 43 provincial chapters of the group to join the fish strike on March 31. The group is also working to convince owners of commercial fishing vessels to join the protests.

In the House of Representatives, Anakpawis lawmaker Rafael Mariano said that Congress and its Committee on Energy should start hearings on the pending measures seeking to repeal the oil deregulation law, and formulate a new policy alternative in the wake of successive oil price hikes.

“Extreme poverty brought by successive oil price hikes dictates the urgency and need to scrap this anti-people oil deregulation law. It is long overdue for Congress to scrap this law,” he said.

Mariano also warned that “transport and people’s strikes will continue to escalate unless the Aquino government decisively act on the oil price increases and scrap the oil deregulation law.”

Anakpawis vice-president Joel Maglunsod said that overpricing, monopoly, and the government’s refusal to investigate and regulate the abuses of the oil companies are the true reasons for the incessant oil price hikes, and not the uprisings by the peoples of Middle East countries,.

“The Aquino administration is not just refusing to regulate the oil industry, it is actually authorizing oil companies to exploit the people. We challenge the government to do so something concrete for the people in this time of high oil prices and high prices of everything: heed our call to scrap the Oil Deregulation Law,” Maglunsod said.

Reforms in The Oil Industry

Despite relentless calls for the repeal of the oil deregulation law, however, Malacañang appears to be dragging its feet.

Pres. Benigno Aquino III has previously said that he wants to “study further” the developments in the oil industry and the matter of continuing oil price hikes. He also said he is open to a suggestion for the Palace to sit down with private oil firms for a possible 30-day ‘waiting period’ before implementing a price hike.

“That seems to be a good suggestion. We will have to consult the oil companies,” he said.

In reaction, the Communist Party of the Philippines (CPP) berated Aquino III over the latter’s refusal to review and repeal the oil deregulation law. It said that the Filipino people’s demand for the nationalization of the oil industry will be among the crucial issues to be raised by the National Democratic Front of the Philippines (NDFP) in negotiating the Comprehensive Agreement on Socio-Economic Reforms (CASER) with the Philippine government.

In a press statement, the CPP said that Aquino “is more interested in ensuring super-profit earnings of big foreign oil companies than protecting the socio-economic welfare of the people.”

The CPP noted the Aquino regime justifies its refusal to repeal the Oil Deregulation Law and regulate prices by claiming it will cot a lot for the government to subsidize the prices of oil products.

This, the CPP said, reveals that the government has “ a myopic view “ of the its avowed role as a protector of the people.

The CPP pointed out that Filipinos’ demand to regulate oil prices does not call for subsidizing the profits of oil companies.

“The strategic solution to the problem of skyrocketing oil prices is to break the control of foreign oil companies in the importation, refining and distribution of petroleum products and nationalize both the upstream and downstream oil industry,” it said.

“In line with this principle, the people demand the nationalization of the acquisition of oil resources, which may include forging deals with countries willing to sell lower priced crude. They also demand that production from local oil wells and other energy sources be nationalized. They demand the setting up of a national oil company that will effect the distribution of oil products at lower subsidized prices,” said the CPP.