You Are Here: Home → 2011 → March → 21 → As Disasters Mount, Groups Call on Aquino to Address Urgent Need to Prepare The Country

As Disasters Mount, Groups Call on Aquino to Address Urgent Need to Prepare The Country

“Both structural and non-structural approaches should be adopted to lessen the impact of disasters. Hazard mapping must also be done for priority areas. In making hazard maps of local scale, it is best that community and scientific data are combined. Results of hazard mapping should be properly disseminated to population at risk.” – CDRC

Environmental and cause oriented groups have called on President Benigno Aquino III to pay wider attention to Disaster Risk Reduction. The escalating nuclear situation in Japan, the recent earthquakes in Haiti, Zealand and Japan, as well as the continuing heavy rains in the Philippines have prompted groups like the Disaster Response Center (CDRC) to call on Aquino President Benigno Aquino III to assess the disaster preparedness of the country. Cause oriented groups have been hounding the current administration because in the past, the government has always been ill prepared for disasters even as the country is disaster prone.

According to reports, Malacañang has already directed the Office of Civil Defense (OCD) under the National Disaster Risk Reduction and Management Council (NDRRMC) to assess the disaster preparedness of the country in the event of a quake-tsunami incident. Items for review include assessment of building safety standards, and status of tsunami warning systems.

In 2010, CDRC called on the then newly-sworn president to prioritize DRR on his first 100 days in office. I said that Aquino should prioritize disaster preparedness and to fully implement Republic Act (RA) 10121 Philippine Disaster Risk Reduction and Management which passed into law on May 27, 2010.

The DRRM Act calls for all government agencies and adjunct institutions to develop, promote, and implement a comprehensive National Disaster Risk Reduction and Management Plan (NDRRMP) to strengthen the capacity of the national government and the local government units (LGUs) to build the disaster resilience of communities. The law calls for the institutionalization of arrangements and measures for reducing disaster risks, including projected climate risks, and enhancing disaster preparedness and response capabilities at all levels.

It’s also stated in the law that disaster risk reduction education should be integrated in the school curricula, and that mandatory training should be given to public sector employees. 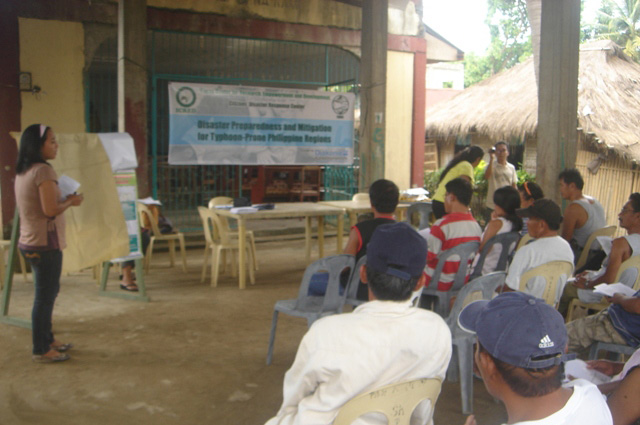 The Department of Education, the Commission on Higher Education, the Technical Education and Skills Development Authority, the National Youth Commission and government science and environment agencies are tasked to integrate disaster risk reduction and management education in the school curricula of secondary and tertiary level of education, including the National Service Training Program whether private or public, including formal and nonformal, technical-vocational, indigenous learning, and out-of-school youth courses and programs.

In his budget message in August 24, 2010, Aquino announced a new program called the “Performance Challenge Fund (PC Fund)” which he said would be implemented by the Department of Interior and Local Government to align local development programs and projects with the priority projects of the national government.

According to Aquino, the PC Fund would also be used to help qualified LGUs under the Local Governance Performance Management Program comply with the DRRM Act of 2010 and with the Ecological Solid Waste Management Act of 2000.

Some P500 million is said to have been provided for this Fund under the 2011 budget.

Disasters and Deaths Due to Heavy Rains

As the Philippine government prepares its campaign of preparedness against disasters, massive devastation because of heavy, non-stop rains continues.

Nine people were killed on March 17 heavy rains fell without let up in the Visayas and Mindanao Regions VII, VIII, X and XIII. Seven of the casualties belonged to the same family and were killed in a landslide, while the two others died from drowning and electrocution respectively.

All members of the Jordan family were killed when their house was buried in a landslide in Brgy Cabalawan, in Tacloban City. Killed were Marlon Jordan 35, Jenita, 35; Angelica, 14; Marieta , 16; John Paul Jordan, 13; John Rey Jordan, 4; and Heyrex Jordan, 3. According to reports, the landslide occurred around 2am while the entire family was sleeping.

In Brgy. Danicop Bohol , 65-year old Armando Buticarlo drowned in the flashfloods, while in Palo, Leyte, a Leo Espina was killed when he was electrocuted.

Based on the most recent alert posted by The National Disaster Risk Reduction and Management Center (NDRRMC) on its website (March 18, 2011), 248 baranggays in the Region VII, VIII, X and XII are already affected by continuous rains. Affected were 3, 130 families, 15,398 individuals. So far, 2,878 families have been evacuated 14, 138 individuals.

According to the agency, there is massive flooding Mindanao which caused flooding in the provinces of Bohol (Region VII), Eastern Samar, Leyte, Southern Leyte, and Western Samar (Region VIII) and Misamis Oriental (Regions X). As a result, flashflood, landslides and tornado were experienced in some areas.