Manila – There is an old Japanese legend wherein it says that anyone who folds a thousand paper cranes will have his or her wish granted. Given the state of human rights in the country, however, it might require millions of paper cranes for wishes for justice against heinous crimes to come true.

Members of the College Editors of the Philippines (CEGP) recently went to Mendiola and gave out paper cranes to passersby comprised mainly of students from San Beda College and Centro Escolar University as a symbolic action commemorating the Maguindanao Massacre. They said it is their wish that justice be attained for the victims.

CEGP president Trina Federis said the cranes symbolize the hope of campus journalists that the quest for justice for the victims of the massacre will be successful despite the slow developments in the case. 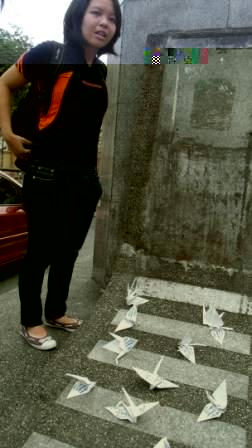 According to Federis, the public should not forget the infamous massacre, which took place on November 23, 2009 because it is a stark reminder of the sorry state of human rights in the country. A shocking total of 58 people were brutally murdered , 38 of whom were journalists. 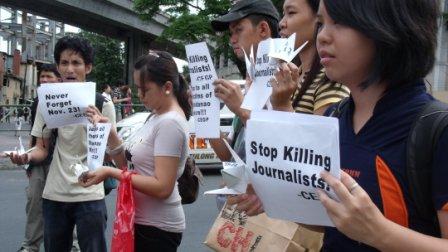 “As young writers and reporters, we hope to one day join the journalism profession and, needless to say, the situation journalists face in this country is hardly encouraging. It is shocking that members of the press are targets of extrajudicial killings, especially those who are courageous in exposing corruption in various levels of government. There is a culture of impunity and it must end: we want a country where to write the truth and to expose society’s evils will not warrant anyone a death sentence,” she said.

“The Philippines is supposed to be a democracy. Regimes that succeeded the Ferdinand Marcos dictatorship have all touted themselves to be standard bearers of democracy, but this massacre happened. It was all about the political clout and abuses of a powerful family close to Malacañang and how its members believed that they could get away with everything including murder. It has been 16 months, but justice is still far off in the horizon for the victims,” he said.

Slow Developments in the Legal Case

Along with the families of the victims, the CEGP laments the slow pace of the legal process when it comes to punishing the masterminds and perpetrators of the massacre. Pasion said that as the weeks and months pass, the chances that justice will be finally given the victims dwindle.

“In the beginning everything was clear: 58 people were killed and they were killed in the most barbaric and violent ways imaginable. Suspects were rounded up and the murder cases were filed. Flash forward to 16 months after: the Department of Justice (DoJ) is nowhere near conducting a satisfactory prosecution of the case,” he said. “There is truth to the adage that justice delayed is justice denied; it doesn’t matter that the main suspects are behind bars – they still haven’t been convicted,” he said. 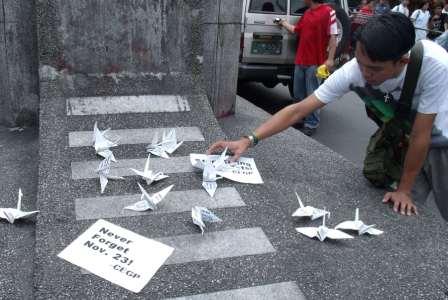 Paper cranes as a symbols of hope that justice will be given the victims of the massacre.(Photo by Ina Alleco R. Silverio / bulatlat.com)

Pasion’s complaint has bearing in the wake of reports that the DoJ is having problems with its own prosecutors handling the controversial case. The international community has already called for swift justice for the victims of the massacre, but the government’s prosecution has been plagued with problems.

Assistant state prosecutor Alexander Suarez wrote and submitted a letter to de Lima stating his misgivings. He said that despite the reorganization of the panel members, “conflict and divergence between public and private prosecutors continued to prevail.”

Suarez was among the six original prosecutors the secretary had retained in the panel. She had previously replaced half the panel, which was comprised mostly of senior fiscals, saying that they “lacked zeal, dynamism, and aggressiveness” in pursuing the case.

“In a team, mistrust and lack of confidence should be stamped out. These are ingredients for conflict. But such malevolence was prevalent during the early stages of the trial of the Ampatuan cases. Despondently and without blinking, I can say that I was also at the receiving end of it,” he said.

Undersecretary Francisco Baraan III has told the media in interviews that the DoJ has had to replace lawyers in the case because of some “personality issues” regarding how the case will be litigated.

The former chair of the panel Assistant Chief State Prosecutor Richard Anthony Fadullon had previously resigned from his his post over his conflict with private prosecutor Nena Santos. There were allegations that Santos wanted to impose her prosecution strategy over the panel, this despite what procedure dictates that private prosecutors should submit to the supervision of the DoJ.