MANILA – The documentary opened with children playing, while at the foreground a child is seen fishing for the day’s meal. Later, that same child helped his mother with household chores. It turned out that the child who had no time to play because he had to help his parents was portraying the type of childhood that the late labor leader and Anakpawis Rep. Crispin Beltran had.

Jane Balleta, the narrator in the documentary Ka Bel (2011), a video documentary produced by Mayday Multimedia Collective, and a granddaughter of Ka Be,l said his poor background shaped the path that Ka Bel would take during his adult life.

The documentary Ka Bel was screened at the Cultural Center of the Philippines and the University of the Philippines Film Center on February 5, 2011 and March 14, 2011, respectively. The film maker Mayday Collective is a group of progressive filmmakers and cultural artists producing audio visual productions depicting the struggle for workers’ rights in the country.

The video documentary, funded by the National Commission for Culture and Arts in cooperation with the Crispin B. Beltran Resource Center, Sine Patriyotiko and Killusang Mayo Uno, is one of the first attempts to capture Beltran’s life and struggles by weaving stories of people who had been close to him before he died in 2008. 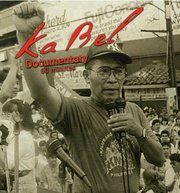 His childhood was spent helping his mother with household chores and assisting his father who was actively involved in the Filipino resistance against the Japanese occupation. As a child, Beltran served as a courier for Filipino guerillas. As an adult, he championed workers’ rights by organizing unions, joining their picket lines and rallies, helping workers in their legal battles and eventually winning a seat at the House of Representatives under the banner of the Anakpawis Partylist.

Beltran’s unwavering service to the working masses and the Filipino people cost him his personal freedom twice. He was imprisoned during the Marcos dictatorship, together with the late labor leader Felixberto Olalia who died after being released from prison. Ka Bel was able to escape from prison and pursue the struggle against Martial Law as part of the underground movement.

Fast forward to the year 2006: Ka Bel was again arrested in his house the day after then president Gloria Macapagal-Arroyo declared a state of national emergency, through Presidential Proclamation No. 1017. Ka Bel and five other progressive party-list representatives who were dubbed as the “Batasan 5” were absurdly accused of plotting against the government together with military rebels. The Batasan 5 were remanded to the custody of the House of Representatives.

His simple lifestyle, as Mayday puts it, is something that many Filipinos can relate to. Despite serving as congressman, Beltran remained as the poorest legislator; he listed as assets, two barong tagalogs, a pair of eyeglasses, cabinet shelves and shirts and his only real property which is his home in Quezon City worth P50,000 ($1,151) until his death in 2008. The house, from which roof he fell and died as a result, was still under amortization. His widow Rosario, more commonly referred to as Ka Osang, worries about how to continue paying for it.

Mayday said Beltran was an inspiration to many as he was “an ordinary son of the peasant class who became a hero of the toiling masses and an internationalist.”

The documentary re-enacted Beltran’s childhood and his early involvement in union organizing. It has superb cinematography, using a lot of depth of field in its shots as well as cutaways in conveying the story. The editing was smooth and simple, which adds a sense of drama to the re-enactments.

One of the most striking parts of the video documentary was when Beltran was being chased, fired at by security personnel of the company where workers were on strike. The camera movement was shaky, adding a sense of thrill while Beltran and his colleagues ran from one alley to another, shouting, “Run! Don’t stop running! Go straight!” as they narrowly dodged bullets.

It would have been better, however, if the documentary dwelled more into the details of Beltran’s early involvement in union organizing. The incident portrayed in the film was one of the turning points in his life. In fact, this part of his life could be the subject of a good film project in the near future.

The latter part of the video documentary was mostly comprised of interviews with people close to Beltran. While it would have been better if the re-enactments were sustained all throughout the documentary, the interview with Ka Osang regarding their family life and sacrifices was very interesting. It could actually stand on its own. Ka Osang was very detailed and animated in her descriptions that one could picture in his or her mind the stories she was telling. She is very witty sharp, recalling everything as if it happened only yesterday.

In one scene, Ka Osang described the angry reaction of soldiers, who were guarding ka Bel’s cell, when he escaped from prison. Ka Osang suddenly shouted, “Pak!”, imitating the sound of the pan hitting a soldier when she retaliated after the latter punched her after realizing that her husband was able to escape. The audience roared in laughter.

The interviews were also helpful in enlightening viewers about Beltran not just as an icon of the labor movement and a representative of progressive party-list organizations in Congress but also as a person, as a father and as a comrade. Ka Bel showed that Beltran was a revolutionary down to the core.

Surely, there would be more productions about the life and struggles of Ka Crispin Beltran that will come out in the future. His colorful and inspiring life could be the subject of more films and book projects. As mentioned earlier, a film focusing on his life and struggles as a union organizer would be a good project.

Ka Osang’s life would also make an interesting film or book about the sacrifices the family of a revolutionary and activist has to endure in the service of the Filipino people.

“He referred to himself as an ordinary person. But Ka Bel’s life teaches us that there is no such thing as an ordinary person in the history of mankind,” an excerpt in the video said, “A person who reaches out to others and mobilizes people performs an indispensable role in promoting change.

For inquiries and film showing requests, you may contact mayday_production@yahoo.com.