You Are Here: Home → 2011 → April → 1 → Killed Urban Poor Leader Laid to Rest, Community Vows to Continue the Fight For Justice

MANILA — As slain urban poor leader Antonio “Nono” Homo was laid to rest on Tuesday, his kin and comrades vowed to continue fighting and asserting their right to decent housing and social services to make sure that he did not die in vain.

“We are demanding for justice and for our rights,” Irene Tena, secretary general of Nagkakaisang Samahan sa Kadiwa (Nasaka), said in Filipino.

Antonio “Nono” Homo, 47, campaign officer of Nasaka, was at his neighbor Julie Manuel’s house on March 16 when, at around 8:40 p.m., an unidentified man aimed the barrel of a .45 cal gun through the window and fired at Homo’s head. The bullet pierced through the victim’s skull. 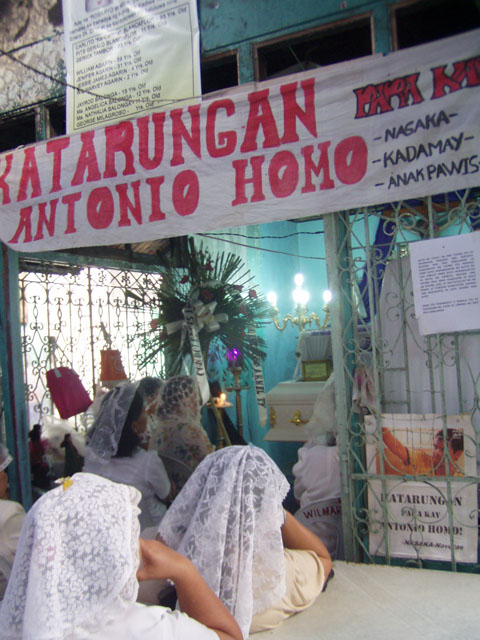 Homo’s brother, Bobby, said their family is grieving for his brother’s untimely death. He said it is hard to let go of a brother like Homo who was helpful, generous and selfless. “Kakainin na lang, ibibigay pa,” he said, “He is always willing to extend a helping hand to others.”

While Bobby is not a member of any activist organization, Homo, who was a member of the Kabataan para sa Demokrasya at Nasyunalismo, a youth group that actively protested against the Marcos dictatorship, brought him to rallies and protest actions. He added that his brother was at the infamous Mendiola Massacre.

“He was very patient in educating me, especially about human rights,” Bobby told Bulatlat.com, “I remember how our home back then was always full of students who wanted to understand the urban poor struggle. My (late) father was very supportive of him.”

When he heard the news that his brother was shot, Bobby said he could not believe it. “I ran but I did not go inside the house (where he was killed),” he said, “I just stayed in the corner. I could not move. “I felt so heavy with grief.”

Tena said Homo’s active participation in their fight against the threat of eviction is the only reason they could think of why someone would want him killed. “He was a good person. He did not have any enemy in our area.”

The struggle of 400 of the more or less 1,000 families in Homo’s community began on January 29, 2011, when a fire burned their community. Tena said the cause of the fire was suspect. “Normally, a fire would start from one house before it would spread. But on that day, the fire started from several places,” she said, “Even the firefighters found it unusual.”

To make matters worse, the firefighters could not extinguish the fire because it was also the very same day that the water company turned off the water supply in their area because of regular maintenance procedures.

Tena said there were various stories circulating among their neighbors regarding how the fire started. One story, she said, is that an unidentified man was seen walking around their community, carrying two or three containers. While they were not able to confirm what was inside the container, Tena said, the people realized after the fire that it might have contained gasoline.

The following day, instead of giving relief goods, the people working for the local government of Navotas came to visit them, saying that the residents, even those whose homes were not burned, should leave their homes “voluntarily” as they were in a “danger zone.”

In a letter from the Office of the Building Official, the residents were advised to “voluntarily leave” their community due to “structural hazards.” Jerry Magpayo of the said local government office, the letter’s signatory, said the houses that were burned and even those that were not are no longer suitable for the residents.

The letter read, “The City Government will not be held liable for any deaths or damages to properties as a result of your failure to heed our call.”

But Tena and the rest of the residents do not believe that they are living in a “danger zone.”

Most of the residents have been living in the community for a long time already. In fact, 46-year-old Tena was born in Kadiwa. “We were already here from the very start. Back then, we used to plant vegetables.”

In their dialogues with the local government, Tena said, they learned that a tenement housing building would be constructed in their community. But they asserted that their area was too small to hold such a facility. “We told them that we are willing to pay a monthly amortization to keep this land. But of course they (the local government) would earn less from us so they really want to drive us away.

Tena said their organization is still collating more data and information to support their claims. So far, Tena said, Kadiwa was already rewarded to them through a city resolution that was passed in 2005, stipulating the conversion of the land from “school use,” because it lies behind San Roque National High School, to “residential use.”

On March 14, the urban poor group filed a temporary restraining order before the Regional Trial Court of Malabon. Two days later, on March 16, Homo was killed. Nasaka president Fernando Sevilla, on the other hand, was advised by the people to leave Kadiwa due to security reasons. Tena said the people believe that it was Sevilla who was the main target of the killing, not Homo.

Other urban poor leaders like Tena continue to receive death threats via text messages. One message warned that a woman who always carries a bag would be killed. Because of this, “no one dares to carry a bag any more,” she said, “We are now more careful about our security measures. We need to be alive in order to continue our struggle.”

When asked who was behind Homo’s killing, “If you will connect everything that has happened, it all boils down to one thing, which is Homo’s active participation in the struggle to keep our homes. And those who are against it are the only ones who are possibly behind all this.”

When they laid Homo to rest on March 29, the hopes of the people did not die with him. They would continue to fight for what they have started, especially now that a comrade has already sacrificed his life for this cause.