When violence erupted when residents of Sito San Roque, near Trinoma mall, resisted attempts by the National Housing Authority to demolish their homes, President Benigno Aquino III ordered a stay in the demolition. But for the residents, the fight is not yet over as tensions flare up once in while.

Residents of the Sitio San Roque II in North Triangle in Quezon City continue to face harassment from the National Housing Authority (NHA).

Last March 26, a security officer sent by the NHA threatened residents and fired a gun after residents asserted their rights against the deployment of armed guards in the community. Though no one was hurt, seven residents, including the community leader, were forced to consider themselves as having surrendered to police authorities when the security agent filed “alarm and scandal,” and “ illegal trespassing on government property” charges against them. 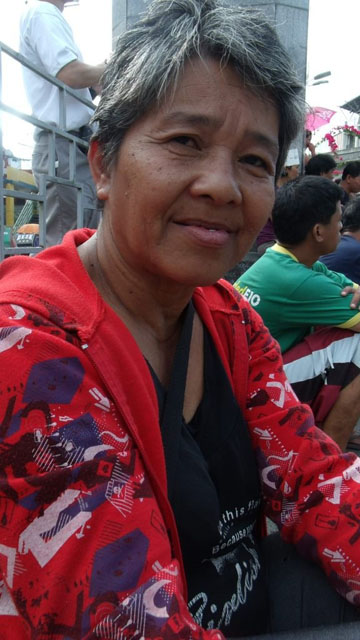 September 23 Movement president Estrelita Bagasbas says the residents of Sitio San Roque will fight for their homes, however humble they are (Photo by Ina Alleco Silverio / bulatlat.com)

San Roque resident and September 23 president Mrs. Estrelita R. Bagasbas told Bulatlat.com that since the beginning of the month, security guards with long and short fire-arms have converted a partially-demolished chapel in the area into their headquarters. When questioned by the residents, the guards who initially numbering 30 then gradually reduced to 10 said that they were sent by the NHA.

“Of course we do not want armed security guards in our area; we have children, we want peace; the NHA should not have deployed guards in our community,” she said.

Residents grew increasingly wary and worried regarding the guards’ presence, so they mounted a campaign to evict the guards.

On the morning of March 26, community residents along with their supporters from organizations Kalipunan ng Damayang Mahihirap (KADAMAY) and Anakbayan went to the guards’ “headquarters” and negotiated with the guards, politely but firmly asking them to vacate the premises and the community. When the guards refused, the residents calmly and carefully began to take the scant furniture and the guards’ personal belongings outside the partially destroyed structure.

The guards were reportedly nonplussed and unable to do anything because of the big number of residents and supporters who stood witness to the eviction. One of them, however, called their officer-in-charge, the security agent from the NHA Shaikram Abdulgar.

As the residents and their supporters went on with their impromptu program, singing songs and playing the guitar, Abdulgar arrived. The man was visibly angry, and immediately began berating the guards and the residents.

Kadamay secretary-general Bea Arellano related that she walked up to Abdulgar and tried to explain why he and the rest of his unit must leave, but the man merely continued shouting.

“I tried to explain to him that all their furniture, all their belongings were right there, all accounted for, but he kicked at his own table until it nearly broke. Later he accused the residents of destroying it,” she said.

Abdulgar reportedly began pushing the residents and their supporters, exhorting the other guards to do the same until a small skirmish erupted. As the residents defended themselves by pushing back, Abdulgar pulled out a gun and fired at the air.

“It was deafening. I was standing only some five feet away and my ears rang until I thought I would go deaf,” said Bagasbas.

Some of the residents ran to the nearby precinct, Masambong Precint 2. A few policemen then arrived and escorted Abdulgar to the station. Community residents including Bagasbas also went to the station and declared their intent to file charges.

“The police did not really arrest Abdulgar — he fired a gun in the presence of many witnesses and he could have killed one of us, but the police did not even handcuff him,” Bagasbas said. She added that the gun the security agent fired was not the same gun he surrendered.

“I do not know what kind of gun he fired, but I saw that it was a different gun that he gave to the police,” she said.

When they arrived at the station, Bagasbas said the police did not even make Abdulgar undergo a paraffin test to determine if he did fire a gun.

“We were able to secure the bullet shell from his gun and we gave it to the police, but they did not store it properly considering that it was evidence. They did not even take pictures of the scene of the shooting,” said the urban poor leader.

To make matters worse, when the residents said they were filing charges of illegal discharge of firearm, Bagasbas said he was also filing counter-charges; but he only gave his statement hours after the incident that took place around noon.

“He told the police that he was waiting for the NHA to send someone to vouch for him. When the man from the NHA arrived, that was when he said he was filing counter-charges against us. The police told us that since we were also being charged, we had to stay or else be considered as evading charges,” she said indignant.