Students from UK Travel to The Netherlands for Prof. Sison’s Lecture

UTRECHT — A busload of forty two students taking up masters degrees and five academic supervisors from the University of Nottingham in the United Kingdom came to Utrecht, The Netherlands to listen to a lecture by Prof. Jose Maria Sison on Philippine and international politics, on April 6 at the NDF International Information Office.

The lecture is part of an educational tour which is a requirement in the masters program of the students. It was arranged with Prof. Sison by Prof. Dr. Pauline Eadie, Co-director of the Institute of Asia Pacific Studies and Exchange Officer of the School of Politics and International Relations of the University of Nottingham in the UK. 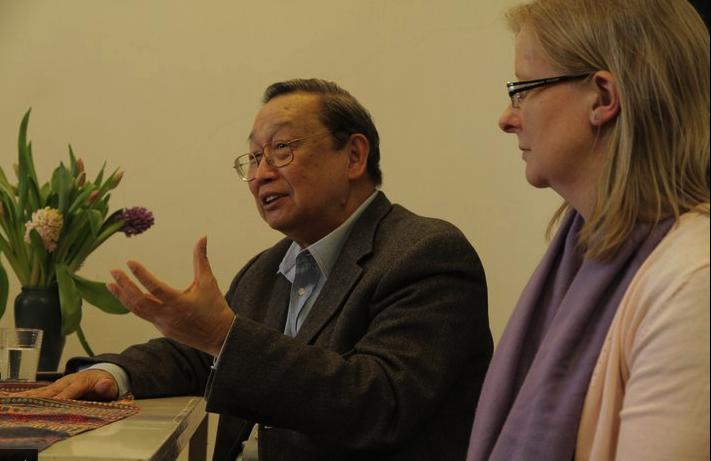 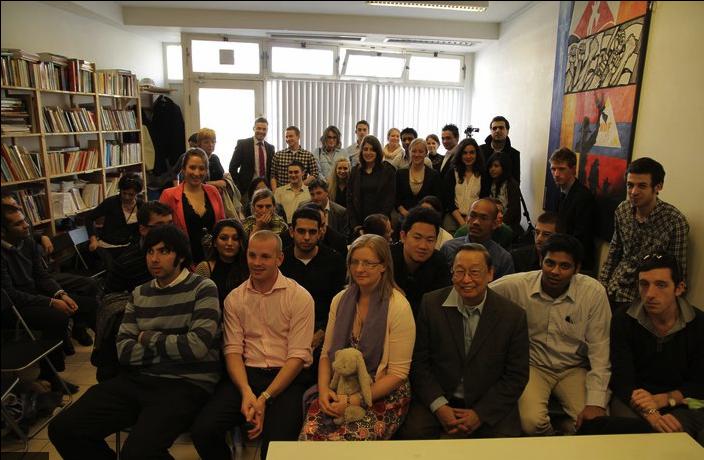 In his welcome remarks, Prof. Sison said he was delighted and honored that the students came all the way from Nottingham and helped him to overcome the efforts of Dutch authorities since 2009 to stop him from delivering the prestigious Stanley Tomlinson Memorial Lecture upon the invitation of the School of Politics and International Relations of the University of Nottingham.

Prof. Sison criticized the Dutch government for refusing to issue him a laissez-passer, despite his being a recognized political refugee and the removal of his name from the terrorism blacklist of of the European Union. This act by the Dutch government, Sison said, is a violation of his basic human rights and fundamental freedoms. It could be remembered that the removal of his name from the blacklist, as ordered by the European Court of Justice in 2009, was a legal victory for Prof. Sison.

Professor Sison’s lecture dwelt on the Philippine situation, the armed conflict between the Manila government and the revolutionary forces, the status and programs or plans of the contending forces, the issues of corruption, state terrorism and human rights violations and the newly-resumed peace negotiations between the Manila government and the National Democratic Front of the Philippines (NDFP).

The students raised questions among which are the following: How popular is the NDFP in the Philippines? What kind of solidarity does the NDFP receive from abroad? Are Sison’s writings available to Filipino students in the Philippines? What personal factors were involved in developing Sison’s revolutionary standpoint? How relevant is communism and would it work in the Philippines?
Prof. Sison gamely addressed these questions with academic clarity and wit. He referred to the millions of Filipinos supporting the NDFP and the international solidarity of anti-imperialist and democratic forces. He described his writings as fairly well distributed through the mass movement and through various mass media.

He recalled the factors that motivated him to become a revolutionary. He pointed out that the issue in the Philippines is not communism but the people’s demand for national liberation, democracy, development and social justice.

He said: “The imperialist states are bogged down in a grave crisis of their own making. They continue to cling to the dogma of neoliberalism. They keep on pressing down the wages of workers and cutting back on government social spending and giving the monopoly capitalists and bailouts, tax cuts and overpriced contracts for military production and wars of aggression. Public money is being used not to stimulate production and employment. Now that there is an obvious crisis in public debt, austerity measures are adopted at the further expense of the people.”

At the conclusion of the lecture, Prof. Eadie and the students profusely thanked Prof. Sison and the NDF International Office for the warm welcome, the meaningful lecture and the lively exchange of ideas.