‘Deadline: The Reign of Impunity’ to Stir Up Audience on Media Killings

MANILA – The film Deadline: The Reign of Impunity is brutal as it is truthful and brave.

It is the first film to depict media killings in the country. The figures are a cause for alarm: 144 journalists murdered since 1986 with 104 killed under the Gloria Macapagal-Arroyo administration. Four were gunned down under the new administration of President Benigno S. Aquino III.

Scriptwriter Bonifacio Ilagan openly admits that the film is loosely inspired by the Ampatuan massacre on November 23, 2009 that claimed the lives of 58 individuals, including 32 journalists. 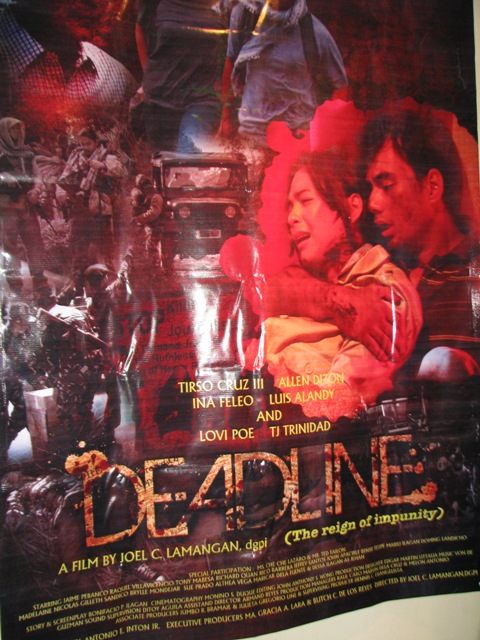 “This is a dramatic presentation of what happened during the past regime,” Joel Lamangan said during the press preview last April 3 at the SM cinema at the Block.

“Killings have been common. We have been desensitized to the point that we do not care. We hope that the film will awaken the people,” Ilagan said.

Lamangan said they approached many individuals and groups for the film. “They were afraid, the producers and artists. [Eventually], I was able to get a team who are not afraid of the truth. Because of them, the film came into being.”

In his speech, Butch delos Reyes, executive producer of Xiti Productions, said media killings reveal the reign of impunity that culminated in the massacre. Delos Reyes said they made the film “because we, storytellers, do not want bad people to win.”

Cruz, who plays an abusive governor in a fictional Mindanao province, said that the film “is of the times.” He said that because of the Ampatuan massacre, “the Philippines has been put in the world map as one of the most dangerous places for journalists.”

“Hopefully, the movie will show what should and what should not happen,” Cruz told Bulatlat.com. 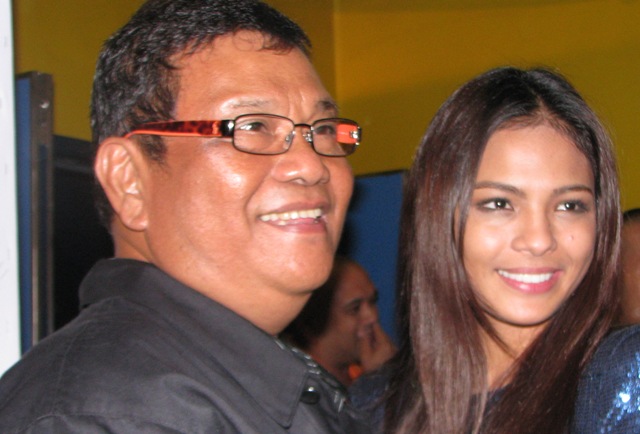 Director Joel Lamangan and actress Lovi Poe, part of the team that are not afraid of the truth. (Photo by Ronalyn V. Olea / bulatlat.com)

In an interview, Dizon said: “I hope the movie will serve as an eye-opener to all Filipinos.” Dizon admitted that before the films Dukot and Sigwa, also directed by Lamangan and written by Ilagan, he was unmindful of what is happening in society. “I learned about the human rights situation in the country,” he said, referring to Dukot, a film about enforced disappearances.

Alandy said it was his first time to learn about media killings. Feleo, meanwhile, said doing the film made her admire and respect journalists. “They sacrifice a lot for their work,” she said.

The movie is replete with heart-pounding scenes and the actors all gave justice to their roles.

Veteran actor Cruz said he was challenged, and learned how to speak the local language. Feleo said she had been constantly reminded by Lamangan of her role as a passionate journalist.

Many of the scenes in the film actually happened, albeit with different names and places. Alandy plays the role of journalist ordered killed by a powerful politician in Mindanao who is closely linked to the president. Poe who plays Alandy’s girlfriend seeks for justice and the search results to another episode of violence.

Edith Tiamzon, widow of UNTV’s Daniel Tiamzon, one of the victims of the Ampatuan massacre, said she could not help but see the Ampatuans in Cruz’s role. “I realized even more how influential they are,” she told Bulatlat.com after the press preview.

Tiamzon said seeing the picture of her husband in one of the scenes made her feel what she felt then when she heard the news of his death. She commended Lamangan for doing the film.

“There are films that tell the truth, that shock the audience with stark realities. Films should be instruments for change,” Lamangan said.

Deadline will be shown in theaters in July.