Labor Groups Prepare Mass Actions for May 1 “and Beyond”

MANILA – On May 1 labor groups in the country plan to hold mass actions in various locations as they press the government to swiftly legislate a P125 across-the-board wage increase. In the days leading to that, they announced activities in workers communities, inviting support and participation of workers, women, youth and students, overseas Filipinos, the urban poor and other concerned groups.

“Noynoy’s term witnessed a meager increase in workers’ nominal wages and huge increases in the prices of basic goods and services. The Filipino workers and people are in a worse situation now, one year after Noynoy Aquino became president,” Lana Linaban, secretary general of Gabriela women’s alliance, said in a press conference with leaders of labor groups and other peoples’ organizations. 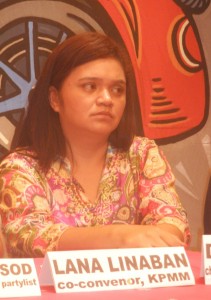 Gabriela announced that it will join a larger protest action against price hikes and low wages on May 1. The day has now been dubbed as ‘Workers and Peoples Day of Outrage”. On that day, there would be mass actions all over the Philippines. In the National Capital Region, the Kilusang Mayo Uno (KMU) announced that there would be “converging points” of workers and supporters in Plaza Moriones in Tondo, Blumentritt, Trabajo Market in España, Sta. Cruz and Plaza Miranda, and in Welcome Rotonda.

From these points, the workers and protesters would march to Liwasang Bonifacio for the central program, and then later will march to Mendiola Bridge near Malacañang to make their calls heard by President Aquino.

In Southern Tagalog and Central Luzon, workers allied with Pamantik and Workers Alliance in Region III (WAR3) will hold a simultaneous “Day of Outrage” mass actions.

Pamantik chairman Noel Alemania, also the acting president of Union of Filipro Employees from Nestle, told reporters that they will likewise hold a “centralized program” in Calamba, Laguna, after holding pockets of mass actions in factory-rich towns such as in Lipa and Mabini of Batangas, in Cavite and in Rizal.

Joselito Ustarez, vice-chairman of KMU, said that the labor groups allied with the KMU and KPMM in Visayas and Mindanao will likewise hold simultaneous mass actions in the urban centers there.

The unabated price hikes, Linaban said, makes the impoverished women’s “food situation” more than alarming. Amid unabated hikes in prices of oil and commodities, Gabriela warns the Aquino administration that its “pantawid” gimmicks won’t be enough to ease the impact of the price crisis on the impoverished people.

No Change Under Aquino

“It is the first May 1 where Noynoy Aquino is president. His first year in power is nearly over but there is still no glimmer of improvement in the people’s plight,” said Renato Reyes, secretary-general of the group Bayan (New Patriotic Alliance). Reyes said that organizations allied with Bayan will join workers in their May 1 Day of Outrage.

“There is no clear policy directions for providing people with relief, other than stop-gap measures,” Reyes said. He cited as example the way the Aquino government has persistently ignored calls to scrap the E-VAT on oil products.

The Aquino presidency is not showing any change from that of Gloria Macapagal-Arroyo, said Elmer “Bong” Labog, chairman of KMU. Under Aquino, Labog said, the government remains functioning as “spokesperson” of the oil cartel, and it is continuing the Arroyo tack of “being subservient to capitalists.”

Neither is the Aquino government showing signs of changing the labor export policy, which is driving Filipino workers to oppressed working conditions in other countries, said Garry Martinez, chairman of Migrante International. Martinez said his group will also join the Day of Outrage on May 1 by picketing Philippine embassies abroad.

On top of pressing the government to finally heed the workers’ demand for a substantial wage hike, regional labor leaders said they will also call for a stop to militarization in their areas.

“Under Noynoy Aquino, the capitalists are given more leeway to feast on exploiting the Filipino workers,” said Noel Alemania, chairman of Pamantik. Alemania came from a Nestle union which saw two of its past presidents gunned down during an intense labor dispute with the world’s largest food corporation, Nestle.

“Instead of working to change the sorry plight of workers, Noynoy Aquino has deployed military troops in Southern Luzon, targeting workers who are organizing into a union,” Alemania said.

In Central Luzon, Dexter Datu said they will also protest the ongoing Balikatan joint US military exercises which are happening in their area. He said the military exercises exert no bearing but even contribute to the worsening of the workers’ and people’s plight in the region, as the US seeks to “train” the Philippine armed forces in combating “terrorism”, which, based on AFP documents, included cause-oriented groups such as workers belonging to progressive unions.