Workers challenge Aquino government to a debate over wage hike

The labor center KMU accused the Aquino government of engaging in a “propaganda offensive against calls for a substantial wage hike, amid growing sentiment in favor of this wage hike.”

See related story: Labor Groups Prepare Mass Actions for May 1 “and Beyond”

MANILA – Filipino workers stepped up the pressure this week on President Benigno Aquino III citing his unyielding stance on a legislated wage hike.

“We challenge President Aquino to face us in a public debate on the issue of a substantial wage hike. Name the place, name the time – let’s get it on since you and your officials cannot help yourselves from spreading lies about a substantial wage increase,” said Elmer “Bong” Labog, chairman of Kilusang Mayo Uno (KMU), in a press conference with leaders of other groups last Monday April 25.

The labor center accused the Aquino government of engaging in a “propaganda offensive against calls for a substantial wage hike, amid growing sentiment in favor of this wage hike.”

A still unfinished mural for May 1 protests (Photo by MARYA SALAMAT / bulatlat.com)

Earlier, the Aquino government flip-flopped on an initial statement dismissing the granting of a wage hike within a year after the last hike, as its own trade secretary admitted that increasing wage rates is “reasonable,” followed by the labor department’s admission that indeed, there is a supervening event warranting another wage hike.

But despite the seeming backtracking against outright rejection of wage hikes, official statements still shun the granting of substantial, across-the-board wage hike to workers.

In a radio interview aired last week, Ciriaco Lagunsad, executive director of the National Wage and Productivity Commission (NWPC), argued against an across-the-board wage increase, saying the government “has no business telling corporations to increase the wages of their CEO’s.” Lagunsad also defended the Aquino government’s non-wage attempt at defusing the mounting public outcry by explaining that the “increase in prices may be temporary, so they’re also giving only temporary adjustments such as the COLA (cost of living allowance).” Lagunsad said he also worries about companies’ ROI (return on investments) and small firms.

Apart from airing possibilities of granting a non-wage hike package of relief from the nonstop price hikes, the Aquino government has also been trying to reroute the national demand for a wage hike to the regional wage boards. But after twenty years of dismal record in wage setting, even as corporations have recorded profits that ballooned from two to five times, big labor groups would now rather padlock the wage boards and urge the Congress to legislate an across-the-board wage hike.

According to the KMU, which has been at the forefront of calling for the abolition of regional wage boards, Filipinos have at least five reasons to hate the said wage boards. They said its premise is “highly erroneous” because it is not true that the costs of living vary greatly from region to region. Its composition is suspect because it is “controlled by capitalists.” Its track record is dismal because apart from having granted very paltry hikes in the past two decades of its existence, it has also granted numerous exemptions, thus taking away whatever benefit the workers could have gotten from the small hikes. 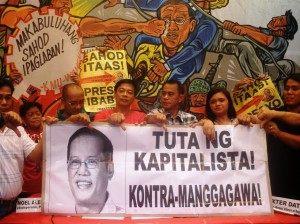 Labor criticized Aquino for “taking the side of the capitalists”. (Photo by MARYA SALAMAT / bulatlat.com)

The above three reasons, the KMU concluded, showed the fourth and fifth reasons why workers hate the wage boards. The regional wage boards’ premise, composition and record show its anti-worker “general character”, which under the “preferential option for the rich” demonstrated many times by the actions of President Noynoy Aquino, already foretells what the regional wage boards (RWBs) would likely come up with, again.

“The RWBs are sure to decide on nominal wage hikes with the Aquino regime’s policy framework – of upholding capitalists’ interests over those of the Filipino workers and people – in mind,” said Roger Soluta, secretary-general of KMU.

As more and more unions elect to back the calls for a legislated, across-the-board wage hike, only the government-backed Trade Union Congress of the Philippines (TUCP) seemed to have kept its faith on the regional wage boards. The TUCP has filed lower than other labor group’s proposed wage hike demands in some regional wage boards to give the latter something to deliberate and decide on.

But in an indication of the growing public clamor for a legislated, across-the-board wage hike a double-bladed proposal has been filed in the Senate last Monday by Senator Ramon “Bong” Revilla. The senator from the export enclave-rich province of Cavite filed a bill calling for a P125 wage hike, but in tranches. Senator Bong Revilla has adopted the SSL-3 style, or the Salary Standardization Law-3 which, according to labor confederation Courage in previous statements, the government had used to minimize the public sector’s victory in campaigning for a substantial wage increase.

Wage Hike Good for the Economy

IBON, a non-government think-tank, belied the allegations of other economists that a wage hike would lead to inflation and a rise in unemployment. “A significant wage hike such as of Php125 will not increase prices or lead to layoffs if employers accept a cut in the profits,” Ibon said in a statement. They added that prices will not increase if employers do not pass the wage hike on to consumers in the price of their products. Layoffs, the group said, will not happen if employers do not insist on reducing their workforce so that they still spend the same amount on wages and salaries.

Based on government data and in a computation of the likely cost of a P125 across-the-board wage hike, Ibon said it would only mean a 15-percent slash in corporate profits.

As labor groups in the country prepare for a nationwide May 1 Labor Day rites, labor leaders vowed they would “escalate” their mass actions to press for a legislated, substantial, across-the-board wage hike.