Although most came from firms belonging to the top 500 corporations, with some being subsidiaries of top global corporations, the unionists complained also of low wages and threats to their job security.

MAKATI – Unionists from firms with headquarters or operations in Makati City and in the adjacent city of Pasay joined forces last Tuesday to form a chapter of the Koalisyon ng Progresibo at Makabayang Manggagawa (KPMM) in their area. Saying that neither the government nor the employers seem inclined to voluntarily give their employees the substantial wage hike they have been demanding for ages, the newly formed KPMM chapter vowed to take part in the mass actions this May 1 and after that to press the demand for a legislated P125 across-the-board wage hike.

Labor leaders from 15 unions who joined the KPMM Makati-Pasay chapter came from hotels, sports club and restaurants, banks and financial institutions, telecommunication and cable TV companies, drug companies and a hospital. Although most came from firms belonging to the top 500 corporations, with some being subsidiaries of top global corporations, the unionists complained also of low wages and threats to their job security. They said that although they have collective bargaining agreements, the difficulties of inking a good deal has lately been magnified by the trend of contractualization and job outsourcing. 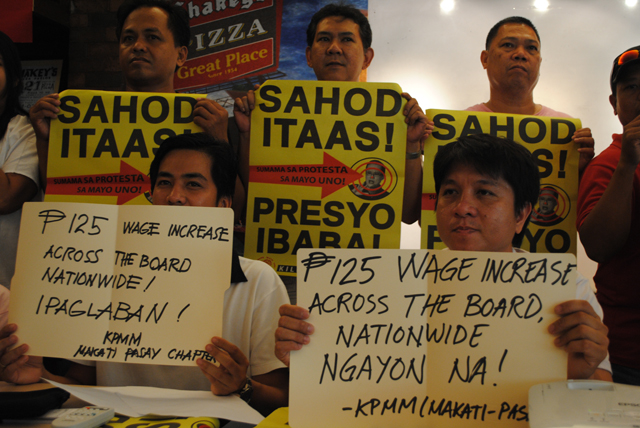 Union leaders from firms in Makati and Pasay announced they will join the May 1 protests. (Photo by JONELLE MARIN / bulatlat.com)

In all of these companies, union leaders told Bulatlat.com that their regular workforce is being whittled down by outsourcing, which paves the way for their companies’ employment of contractual workers. In all of these companies, the unions are putting up a fight, but in various ways, their leaders said, the companies have just gone on ahead and employed lower-paid employees from outsourcing companies. If the P125 across-the-board wage hike bill would be approved, the employees from outsourcing companies would be the most in need of this.

In banks and financial institutions, unions have earlier banded together to oppose a Bangko Sentral ng Pilipinas (BSP) circular allowing banks to outsource almost all its job functions. Called BFU 268 (Banks and Financial Unions vs BSP circular 268), the group is set to lobby congress to scrap the offending BSP circular. According to Joseph Macalinao, president of the 3,000-strong union of employees of Philippine National Bank and part of the BFU 268 secretariat, banks have been using the said circular as basis for outsourcing many job functions, leading to a reduction in regular bank workers. 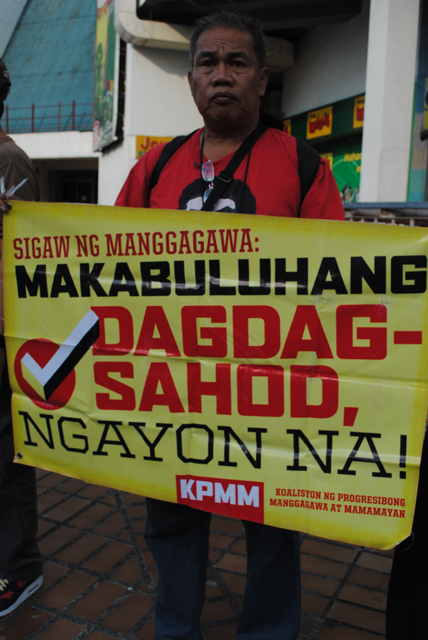 Contractualization remains a big problem to employees, said another member of the BFU 268 secretariat, Mark Gonzales, who is also president of the union of employees of Planters Bank. Gonzales told Bulatlat.com that Planters’ Bank has implemented a selective outsourcing, while in other banks that are members of the BFU 268, the current employees are almost totally employed by outsourced “service providers.” Gonzales said that employees under these service providers receive wages that are lower than their regular in-house employed counterparts.

In the Philippine Air Lines, the threat to outsource at least three major departments— and layoff nearly 3,000 regular employees in the process— have been hanging over the workers’ heads since last year as PAL’s management secured the approval of the labor department and President Benigno Aquino III. And yet, there are already approximately 2,000 contractual employees working side by side with regular employees. Also, the ground crew union complains that they now face a “de-facto indefinite CBA moratorium”.

In other blue-chip companies such as the Philippine Long Distance Telephone Company, outsourcing has been going on for years as the company no longer replaces its retiring regular workers by younger regular workers, preferring to get agency workers instead. The union of the rank-and-file workers here has reportedly been down to less than 2,000 members. The said union used to count as much as 5,000 members years before.

Among hotel workers, the problem is not just contractualization or low wages, but also “very strict foreign bosses who can fire you at will if he or she decides to hate how you look or acted, a five-star hotel union leader told Bulatlat.com on condition of anonymity. “We’re like walking on egg where we work,” he said, adding that as far as he knows, he shares the same plight with most hotel workers from other five-star hotels in Makati.

In drug companies, union leaders told Bulatlat.com that apart from the problem of redundancies as a result of merging, their regular workforce and CBA’s are also threatened by the growing tendency of the company to outsource jobs.

The union leaders who formed the KPMM-Makati-Pasay chapter said in a statement that indeed, organizations and alliances such as what they formed are needed as “initial step to advancing the just call for P125 across-the-board wage hike.”