Given the growing number of lawmakers supporting the legislation of a substantial wage hike, workers remembering Ka Bel today are hoping that finally, the bill which he first authored and filed may be enacted at last.

MANILA – Today marks the third death anniversary of Crispin ‘Ka Bel’ Beltran, a staunch labor leader whose death called attention to his remaining as poor and pang-masa, despite having been a barong-clad party-list congressman for more than two terms.

His family and members of labor organizations announced they will hold a short program today at his commemorative bust at Plaza Miranda in Quiapo, Manila. After that they will hold a rally from Plaza Miranda to Mendiola Bridge (now Chino Roces) with other sectors to press their demand for the passage of the P125 ($2.90) wage hike bill. In the evening they will hold a film showing about the life of Ka Bel as well as a program giving him tribute at the Bantayog ng mga Bayani in Quezon City.

Roger Soluta, secretary-general of labor center KMU which Ka Bel chaired for years since the late 80s, said their vow to advance the people’s struggle for their basic rights and for a significant wage hike is, in their belief, the highest tribute they can give Ka Bel.

The P125 wage hike bill was first filed by Ka Bel in 2001 when he was a Bayan Muna party-list representative. He subsequently refiled the bill in the succeeding reopening of Congress since then. Today, ten years after its first filing and three years after Ka Bel’s death, it still remains a bill.

More than a week after the Aquino government through the regional wage boards started granting emergency cost-of-living allowances in lieu of a wage hike, the demand for a legislated substantial wage hike remains firm on the workers’ agenda. This week, the progressive labor center KMU picketed the offices of the labor department in Manila to condemn what they call as the department’s acting as “spokesperson” of the big capitalists. The KMU said DOLE demonstrated that when it defended the widely condemned P22 ($0.51) emergency COLA. 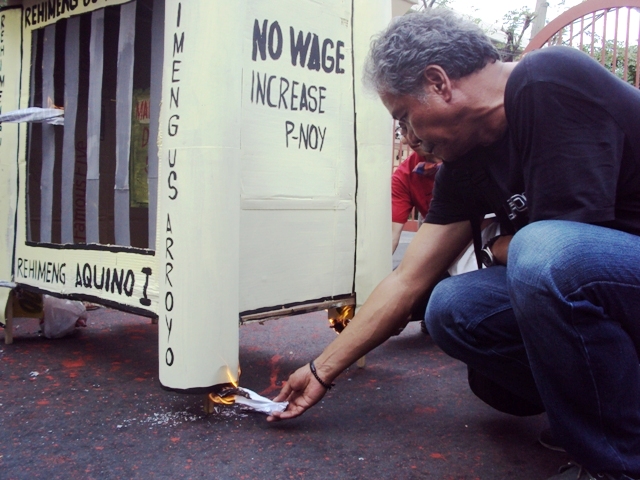 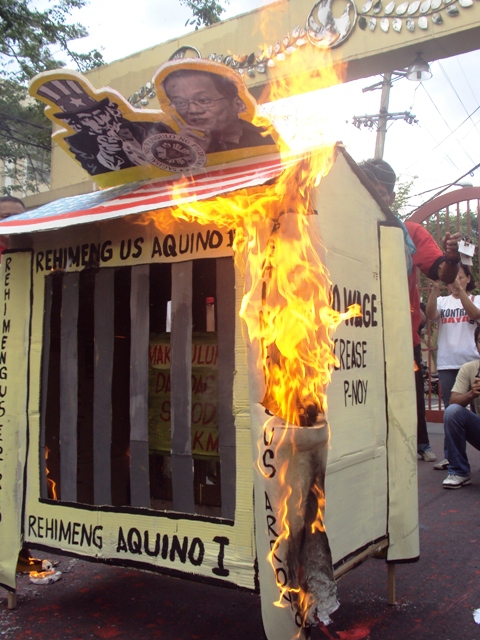 “It is presenting the P22 COLA as a ‘win-win solution’ when it is in fact a highly-biased decision in favor of big capitalists at the expense of the Filipino workers and people,” said Soluta. Its being an emergency or temporary aid also flies in the face of more than two decades’ stagnation of real wages in the Philippines, said EILER, a labor non-government research organization.

Based on computations of Ibon Philippines, a non-government think-tank, the granted emergency COLA in the National Capital Region barely adjusted the minimum wages back to its real level when Aquino assumed the presidency almost a year ago. Labor and youth groups complained that the youth and working people’s future looked even bleaker now as they are being greeted by announcements of continuing price increases of oil products, bread, MRT-LRT fares, bus fares, electricity rates, road toll fees and tuition fees.

Rep. Emil Ong clarified that basic pay is entirely different from COLA and that the approval of meager COLAs does not in any way give reason not to tackle, or dismiss, the bill filed by Anakpawis Party-list Rep. Rafael V. Mariano and other progressive party-list groups, which seeks a P125 across-the-board wage increase nationwide.

“It is good that such a call is coming from someone who is not only a politician but also a businessman. Sen. Villar is in a good position to speak about the minimal impact that a P125 ($2.90) wage hike would have on employers’ profits,” Soluta said in a statement. He added that his group is hoping Sen. Villar can also urge his fellow businessmen to “shed light on what is ailing small Filipino businessmen, to counter the Aquino regime’s claim that a P125 wage hike will cause factory closures.”

The KMU has been urging small Filipino businessmen to speak out against spiraling energy costs and unabated importation in the country.

Given the growing number of lawmakers supporting the legislation of a substantial wage hike, workers remembering Ka Bel today are hoping that finally, the bill which he first authored and filed may be enacted at last.