Airish has meningocele, meaning she has a growth next to her small head that is much bigger in circumference. If only her mother knew that she had to take a P6.00 tablet of folic acid or folate per day during her pregnancy, Airish could have been spared from having meningocele.

Ginalyn Ortiz is only 17 years old but she’s already a mother. She was only able to attend school until the third grade, and from the time she was 14, worked as a live-in housemaid in Galas, Quezon City. She met her partner, Robert Yu,29, at her former employer’s house where he also worked as a houseboy. When they realized that she was pregnant, they immediately went home to Pitogo, Quezon where Ginalyn’s father and twin sister still lived. Robert originally hailed from Atimonan, also in Quezon. He was accepted into Ginalyn’s family and planned to get married as soon as they have enough money to do so.

Then Ginalyn gave birth. She named her daughter “Airish Robelyn,” and the baby is now six months. Most five-month old babies can already lift their heads or to roll over from their backs on to their stomachs; six month olds like to wriggle around the bed and enjoy flipping themselves over like pancakes being turned in a pan. Airish, however, can do none of these things. She can only lie on her back and gurgle her happiness or discomfort from the same position all day, all night.

Airish has meningocele, meaning she has a growth next to her small head that is much bigger in circumference, and it grows at an alarmingly fast rate as Airish also develops. 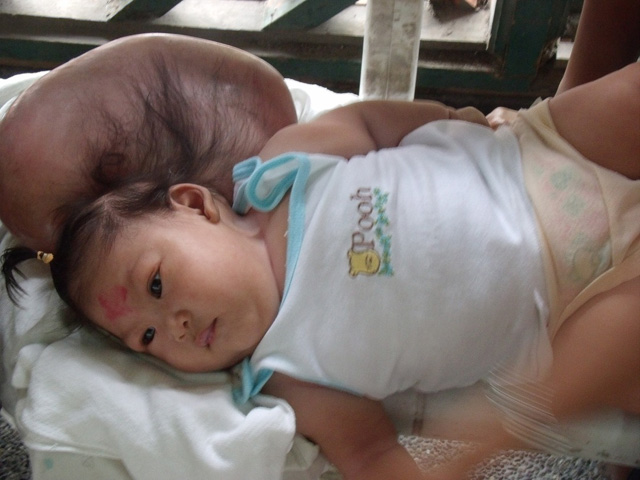 Six-month old Airish Uy has meningocele and has a growth next to her small head that’s much bigger in circumference. It grows at an alarmingly fast rate as Airish also develops. Her parents Ginalyn and Robert are at a loss as to where they will get funds for Airish’ medical needs. (Photo by Ina Alleco R. Silverio / bulatlat.com)

According to online medical websites, meningocele is a form of spina bifida, which in turn refers to any birth defect involving incomplete closure of the spine. It is a congenital malformation, an error in the development of the central nervous system and particularly affects the spinal cord and spine.

Ginalyn said that the entire time she was pregnant with Airish, she not once went to a doctor. Their house in Pitogo is a three kilometer-walk from the main highway, and even then there is no nearby hospital, only a clinic. She was only checked by a midwife, who is employed by the Department of Health to go around villages and towns in the provinces to deliver healthcare to the impoverished residents.

“The midwife came every month from the time I was two months pregnant. We had no money to go to Gumaca or Lucena to consult a doctor, so we were already grateful for the midwife’s visits,” Ginalyn said.

According to Ginalyn, the midwife only told her to drink ferrous sulfate tablets but did not recommend vitamins. Neither did the midwife give her any advice to stop lifting heavy objects, get proper rest and nutrition. Ginalyn did not benefit from ultrasound check-ups, or receive information on how pregnant women should always take calcium and folate tablets or capsules to help strengthen her body and to help in the development of her yet-unborn baby.

In the meantime, because of poverty, she was also unable to eat the kind of food that obstetrician-gynecologists usually order pregnant women to eat and make sure that she ate the proper amounts.

According to local health standards, the following should be done during a prenatal check-up are: (1) weight check; (2) height check; (3) blood pressure check (4) urine examination ; (5) blood sample examination ; (6) consultation about pregnancy complications; (7) instruction and preparations as to where to go for pregnancy complications; (8) tetanus toxoid injection; and (9) ensure iron supplementation and intake of prenatal vitamins.

Ginalyn can only remember having her blood pressure checked and that it was always low. The midwife did not tell her to do anything about the low BP much less to take anything to regulate and normalize it. As for to other prenatal check up necessities, there were none.

“The midwife just told me to take the little red iron tablets. It was good that the tablets were cheap,” she said.

When Ginalyn reached her fifth month, the midwife felt her stomach and said that Ginalyn might be having twins.

“She told me that she felt two heads, but she couldn’t feel the body of the other baby. I was worried at first because even then my stomach felt uncomfortably heavy like the baby inside was going to come out anytime soon. The midwife didn’t raise any alarm afterwards, so we thought that nothing was really wrong,” she said.

The entire time that she carried Airish, Ginalyn also worked as a laundrywoman. She lifted heavy pails of water and bundles of clothes. Robert in the meantime worked as a farmhand for a small agricultural company that grew ampalaya (bitter gourd), eggplants and tomatoes. For his labor he earned P200 a day.

When Airish was finally born on November 27, 2010, she weighed a healthy 3.5 kilos. Her skin was a creamy white and she had a head full of coal-black hair. She had her mother’s slightly chinky eyes and her father’s thin lips. Her parents thought she was perfect, but there was a sac filled with fluid connected to her skull and spine.

What makes Airish’s condition tragic is that it could very well have been avoided.

Online medical sites refer to various research studies saying that insufficient intake of folic acid – a common B vitamin – in the mother’s diet is a key factor in causing spina bifida and other neural tube defects. Prenatal vitamins that are prescribed for the pregnant mother typically contain folic acid as well as other vitamins.

For the most part, the medical sites say that meningocele is unknown. They go on to say that low levels of folic acid in a woman’s body before and during early pregnancy is thought to play a part in this type of birth defect. The vitamin folic acid (or folate) is important for brain and spinal cord development.

Prenatal screening is also said to be valuable in diagnosing neural disorders like Airish’s. During the second trimester, pregnant women can have a blood test called the quadruple screen. This test screens for myelomeningocele, Down syndrome, and other congenital diseases in the baby. Most women carrying a baby with spina bifida will have a higher-than-normal levels of a protein called maternal alpha fetoprotein (AFP).