You Are Here: Home → 2011 → May → 27 → Aquino government neglects country’s tertiary education; tuition hikes reach up to 103 percent in the NCR

So what if the country’s universities are among the top in Asia? The government still neglects these institutions by commercializing education and making it less and less accessible to the poor majority of Filipinos.

This was the assertion of Kabataan Partylist Rep. Raymond Palatino in reaction to a recently released report on the Top 200 Asian Universities for 2011.

“Majority of the top Asian schools, including the leading Hong Kong University of Science and Technology, are state universities substantially funded and supported by their respective governments. This appreciation for tertiary education by other Asian governments are blatantly in contrast with the education policies of the Aquino administration. In our country, state universities and Colleges (SUCs) are institutions of destitution,” Palatino said. 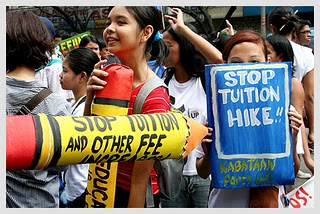 Students led by Kabataan Party-List and the National Union of Students of the Philippines say that the Commission on Higher Education continues to fail in its role to ensure accessible and quality tertiary education in the country. They said the CHED has reneged on its promise made last year that there will be no tuition and other fee increases in state universities and colleges (SUCs) but, many SUCs have already jacked their fees this coming enrollment period. (Photo courtesy of NUSP / bulatlat.com)

In the ranking of career and education network QS, the University of the Philippines placed number one in the country and ranked number 62 in Asia. The Ateneo de Manila University was ranked 68; University of Santo Tomas, no. 104; De La Salle University, no. 107.

The Philippines has 2,180 colleges and universities only 112 of which are SUCs. Palatino noted that the Philippines is dominated by private schools.

“It is alarming that our SUCs are increasingly pressured by the government to function as private schools. The country’s premier university, UP, receives insufficient funds from the government. Thus, it is forced to raise tuition fees to cover the shortage of funds. Tuition in the university now costs as much as P1000-P1,500 (US$23.25-US$34.88) per unit. That translates to P18,000 (US$419) per semester, but this still excludes miscellaneous fees,” Palatino said.

Palatino also said that like its predecessors, the Aquino administration repeatedly pits basic education and tertiary education against each other, which shows its “very limited” view on education. He said that if the government genuinely considers education a priority then it will increase budgetary allocations for public schools and SUCs.

The youth lawmaker also said that the Commission on Higher Education (CHED) has failed in its mandate to ensure that education in SUCs be accessible and good in quality. He pointed out that despite the promise of CHED last year that no tuition and other fee increase will be imposed in SUCs, many SUCs have already announced fee increases this coming school opening.

Based on the reports gathered by the the Kabataan Partylist and the National Union of Students of the Philippines (NUSP), various SUCs will impose fee hikes for SY 2011-2012.

Moratorium on all tuition and other fee increases

Recently the NUSP held a picket in front of the offices of the Commission on Higher Education to demand a moratorium on tuition and other fee increases for the coming semester.

“There has been no significant change to the CHED under the new administration.The CHED has perrenially proven itself useless against stopping tuition hikes and regulating the costs of education. What good are its promises when it can’t make good on them?”

“In 2010, students and faculty all over the country held strikes and protest actions against budget cuts, and this prompted the CHED to make its announcement that there’ll be no tuition hikes for the coming academic year. Now it’s becoming apparent that the CHED lied through its teeth because already, a number of SUCs are set to increase their tuition and miscellaneous fees.

According to earlier statements from CHED, around 300 Private Schools will increase its tuition for the coming semester. 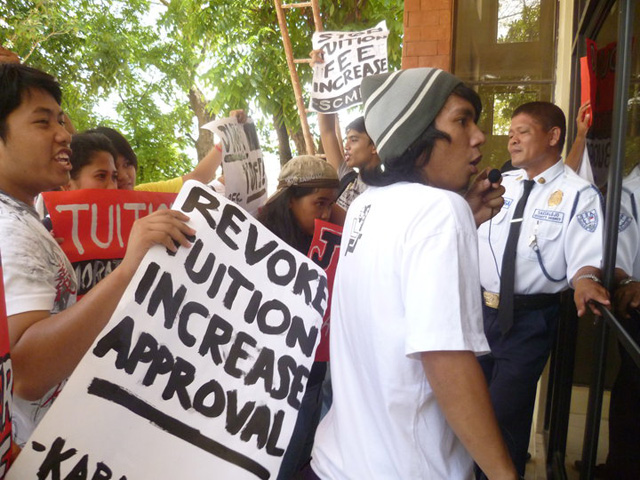 A study by the United Nations Educational, Scientific and Cultural Organization (UNESCO) in 2008 revealed that 73 percent of Filipino youth were forced to drop out because their parents could not afford the high costs of education. (Photo courtesy of NUSP / bulatlat.com)

The youth group also blamed CHED’s policies, such as the CHED Memorandum Order 13 (CMO13) for the soaring tuition rates. They said that the memorandum legitimizes the unhampered and “no ceiling” tuition increase systems of private schools. The CMO 13 also does not require schools to consult students and parents regarding miscellaneous fee increase.
For their part, student council leaders reiterated the demand to the CHED and the Aquino administration to junk all tuition hike proposals . “Parents, teachers and students remain united in their call for a tuition hike moratorium. CHED allows the yearly increase of tuition and other fees to the detriment of millions of students who are forced to drop out,” they said.

Racedes said that based on UNESCO’s study in 2008, 73 percent of Filipino youth were forced to drop because their parents could not afford the high costs of education.

“It’s been three years; we have no doubt that the percentages are now higher given that CHED has not done anything to improve the state of Philippine education and lower costs,” he said.
Finally, Representative Palatino said that the CHED’s inutility in regulating tuition fees is proven by the fact that tuition has doubled in 10 years. He said that CHED’s argument that tuition and other fee hikes translate to better facilities and higher salaries for teachers does not hold because 1) despite TOFI, majority of schools still have poor facilities; 2) the salary of many of teachers does not automatically increase after every TOFI, and in fact, has remained inadequate for the past years.

“The only ones who benefit from these tuition hikes are school owners who rake in millions with every increase.” Palatino said.

Palatino also said that CHED is forgoing its constitutional mandate to regulate the “crazy accession” of tuition and other fee over the years. He cited the the Supreme Court decision in 1992 in the case of Lina vs. Carino which asserted that the Department of Education, Culture and Sports (now the Ched in the case of tertiary education) has the power to can set guidelines for and limit the imposition of tuition adjustments.