MANILA — Residents of urban poor communities in Metro Manila denounced in a protest action the various threats of demolition under the administration of President Benigno S. Aquino III.

“While there have been demolitions in the past, it is the fire incidents that are happening under the Aquino administration in urban poor communities where there are demolition threats that bother us,” Carlito Badion, vice chair of urban poor group Kadamay told Bulatlat.com, ” It is also ironic that it happened during the supposed moratorium on demolition.”

Aquino was forced to implement a moratorium on the demolition of shanties in the light of the violent demolition that happened in Sitio San Roque, Barangay (village) Bagong Pag-asa, Quezon City last September 23, 2010. But Badion noted that, as of May 5, their group have recorded at least 852 instances nationwide where a fire occurred in a community where there is a threat of demolition. 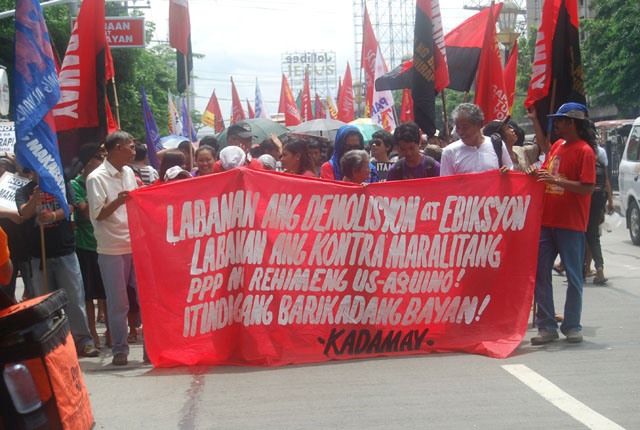 KADAMAY and other organizations gathered in front of Univ. of Santo Tomas, Manila as they make their way to Mendiola near Malacanang. 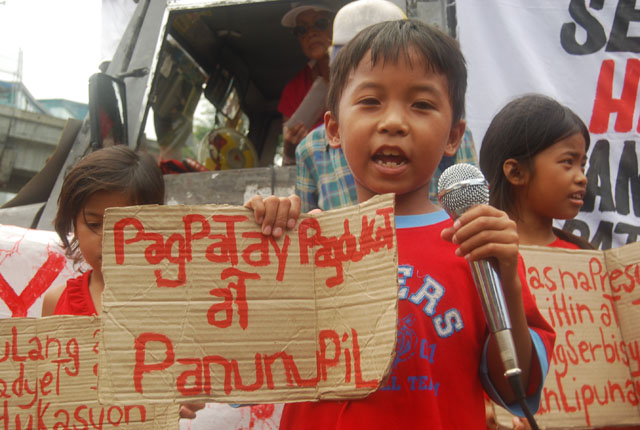 The boy is in high spirit while holding a disheartening placard, reciting a poem in line with it. (Photos by Erika Calleja / bulatlat.com)

The group added that these projects are in compliance with the dictates of the International Monetary Fund-World Bank to “build infrastructure that would ensure profits to them and not to the interest of the Filipino masses.” 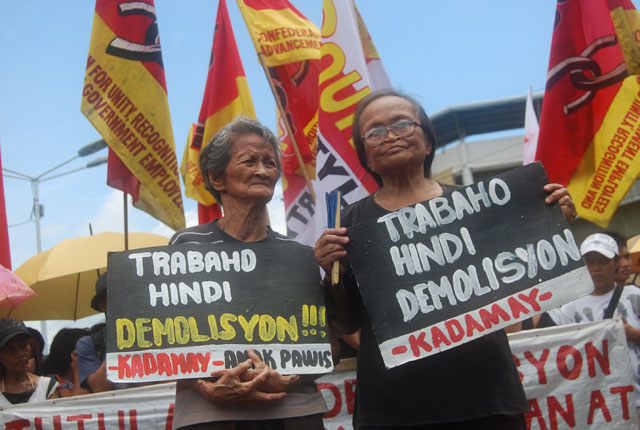 Chair Emiritus Carmen “Nanay Mameng” Deunida of KADAMAY and companion fight for their common beliefs despite their age. (Photo by Erika Calleja / bulatlat.com)

Residents from various communities, such as from Sitio San Roque in Quezon City, Corazon de Jesus in San Juan City, Laperal Compound in Makati City, Tondo in Manila, and in other communities from Navotas and Caloocan, arrived to denounce the continuing threats of demolition.

Josie Lopez of Alyansa Kontra Demolition and a resident of Sitio San Roque said that the present government has promised a lot of things yet it has done nothing but to “purposefully neglect” its people.

“They are driving us away to the mountains,” Lopez said referring to the far resettlement areas that is offered to the residents of the communities, “But on our return, they should be prepared to face a stronger, bigger fight.” 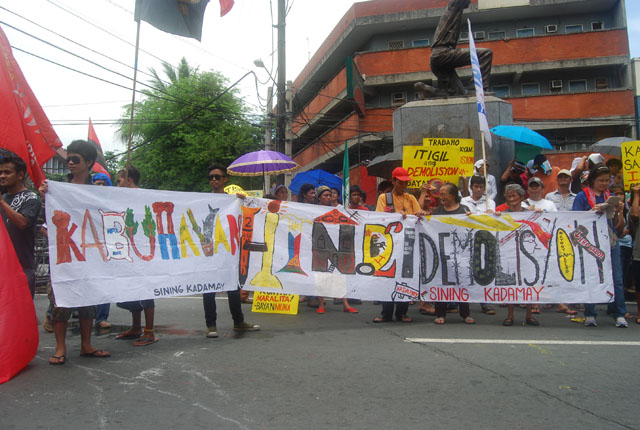 KADAMAY with other organizations made their way to Mendiola with the agenda of voicing out their needs to the Aquino administration. (Photo by Erika Calleja / bulatlat.com)

Estrellita Bagasbas of the September 23 Movement, a local organization in Sitio San Roque formed after the violent demolition in September, said that the residents of their community would never accept the relocation area offered to them, “There is no water, no electricity. Maybe its you (referring to government officials) who should suffer there.”

“This is also a demolition of their livelihood, shelter, and their dignity,” Badion said. He added that the only way to resolve these problems is to implement a national industrialization and a genuine agrarian reform program.