As the countdown to the June 2011 opening of classes begins, government employees are all the more compelled to demand a P6,000 across-the-board salary increase.

The Confederation for the Unity, Recognition and Advancement of Government Employees (COURAGE) led a rally at the foot of Mendiola bridge on June 1 to once more demand for a substantial salary hike. President Benigno Aquino’s Executive Order No. 40 declaring the earlier release of the third tranche of the salary Standardization Law 3 salary adjustment for government employees took effect on June 1.

“Obviously this is not a salary increase. President Aquino merely implemented the law passed by his predecessor Gloria Macapagal-Arroyo. He has been in office for almost a year now but he really has done nothing to help government employees. This coming school year, we expect that many children of government employees will be forced to either drop out or change schools because their parents can no longer afford to pay tuition,” said Courage president Ferdinand Gaite.

Based on data from Kabataan Party-list, the share of the education sector in this year’s national budget is at 11.5 percent while the national average under the previous administration is at 13 percent. While the national average tuition rate in the country increased from P257.41 to P501.22 (US$ 5.98 to US$11.65) per unit in the last decade, the Aquino government has allowed 281 colleges and universities to hike their tuition rates this school year. According to the Kabataan Partylist, eight out of ten high school graduates this year will be unable to go to college.

Education statistics from the National Statistical Coordination Board reveal sobering facts. Elementary school net participation rates (or NPR, the proportion of the number of enrollees) of the 7-12 years old—have plummeted from 95 percent in school year (SY) 1997-98 to 74 percent in 2005-2006, as have high school NPRs.

Cohort survival rates (CSR), or the the percentage of enrollees at the beginning grade or year in a given school year who reached the final grade ) have also dropped: As of 2010, out of every 100 children who enter Grade 1, only 63 will reach Grade 6. In high school, the CSR have dropped even more: from 71 to 55. Which means, of course, that school dropout rates have increased.

According to the Philippines Midterm Progress Report on the Millennium Development Goals, access to primary education in the country has worsened during the schoolyear 2005-2006. The participation rate in elementary education of pupils aged 6-11 declined from 96.8 percent in 2000 to 84.4 percent in its 2006. 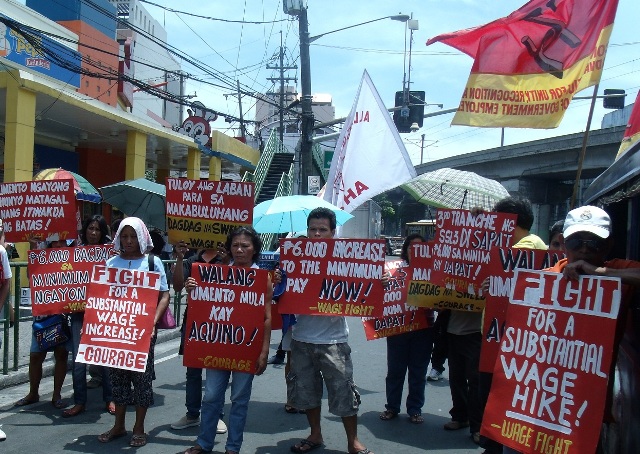 All these statistics point towards a deteriorating ability of Filipinos to sustain their children’s education.

“This June will see many government employees panicking over their children’s school expenses, while others will be forced to contend with the fact that they can no longer send their sons or daughters to college. A P6,000 (US$140) salary increase would help us shoulder the costs of our children’s education, but the Aquino government remains deaf to our demands. Even with the full implementation of the SSL3, the minimum pay will still only amount to Php9,000 (US$209) which is far below the P29,000 (US$674) estimated monthly cost of living. The SSL 3 only provided for staggered wage increase to be fully implemented on 2012. Because of this, our supposed ‘adjusted salaries’ are already lost to inflation even before we actually receive them,” Gaite said.

Salary grade 1 or minimum pay employees from the public sector only receive a monthly salary of P7,510.00 (US$175), after the mandatory deductions such as taxes premiums and contribution to the Government Social Insurance Service, PAG-IBIG and Philhealth. There are even SG 1 employees who get only P6,781 (US158) monthly minus the deductions.

“The Aquino government can allocate P700 billion (US$16,279,069) for debt servicing but continues to evade addressing our valid demand which will not even amount to 30 percent of the money earmarked for debt payments,” Gaite said.

A spokesperson of the Intramuros Administration Casual Employees Union in the meantime said that only ranking officials like secretaries, undersecretaries and higher officials in government benefitted from the SSL 3. He said that these officials secured P10,000 to P12,000 (US$232 to US$279) in salary adjustments.

“Rank and file employees received only an additional P712 (US$17) monthly from the SSL 3 or roughly P23 a day. The prices of basic goods and commodities continue to rise and we are far from being economically equipped to cope with this. President Aquino was elected into office because of the many sweet promises he made during the campaign period; but where are we now? Everywhere we look there are unemployed Filipinos; families are being torn apart by poverty. The least that Malacañang can do is to lay down a substantial salary hike for all government employees; and by this we don’t mean something like the SSL 3, but an honest to goodness increase,” said Nori Azura.

Current surveys say that house rental for a family of five requires P10,000-P15,000 (US$233-US$348) depending on the location of the property being rented. The average cost for a water connection per month is P600 (US$14)The average monthly electrical bill if a family who owns a television, a small refrigerator, and one horsepower airconditioner will be at least P2,000(US$47.00). Telephone service starts at P600 ($14.00), for a basic land line service which excludes long distance calls. A broadband/DSL internet service with unlimited connection time costs P1000.00 ($23) per month.

By far these are barely within the means of most ordinary government employees, but the total expenses still no not include public transportation costs, health costs and education expenses as well as food.

Rose Gablois, president of the the National Federation of Employees in the Department of Agriculture (NAFEDA) in the meantime said that not only do government employees have to suffer from low salaries, they are also threatened by unemployment because of the Aquino government’s decision to continue implementing Macapagal-Arroyo’s November 2004 EO 366.

Titled ” Directing A Strategic Review of the Operations and Organizations of the Executive Branch and Providing Options and Incentives for Government Employees Who May Be Affected by the Rationalization of the Functions and Agencies of the Executive Branch,” the order directs agencies to prepare a rationalization plan to identify posts that are redundant/outdated or no longer relevant to the accomplishment of the major final outputs of the particular agency. The review of agency operations and structure also supposedly aim to improve the quality and efficiency of government services. It set into motion the rationalization of functions of agencies in the executive branch. Each agency has been ordered to formulate a rationalization plan to supposedly remove out duplications/redundancies and focus on core functions.

“The Aquino administration is continuing the anti-employee policy implemented by his predecessor. Since the EO was laid down in 2004, some 160,000 government employees have already lost their jobs, forced into early retirement. This is already equivalent to 12 percent of the total number of the public sector work force,” she said.

Gablois said that DA Secretary Prospero Alcala had instructed all heads of agencies under his department to implement EO 36and to proceed with the privatization of the state farms, livestock facilities and other properties.

The rationalization program uses us as sacrificial lambs. In the name of doing away with corruption, and in the guise of promoting an efficient bureaucracy, ordinary employees are being rendered jobless. It is common knowledge that corruption happens at the higher levels of the bureaucracy. As for efficiency, it is primarily a question of public administration. It’s unjust that ordinary employees are being forced to take early retirement just so the government can say that it’s improving efficiency,” she said.

In Arroyo’s term alone, 11,256 positions of which 5,930 were funded positions have been abolished by government through the program. In the meantime, more than 80 rationalization plans of agencies or government-owned and controlled corporations are still pending approval by the Department of Budget and Management.

Courage is slated to hold a protest in front of the House of Representatives on June 8 to oppose the privatization of various government agencies, among them the National Food Authority and the National Housing Authority.

If the Aquino government continues to deny government employees their rightful salary increases would it be better for them to become entrepreneurs?

She went on to say that the proposal aims to keep the government’s pool of talented and experienced personnel in its employ, and help them when they go into private life after retirement.