You Are Here: Home → 2011 → June → 3 → Consumers group finds Cheaper Medicines Law no better than a placebo

A 2008 study of the Consumers Action for Empowerment and the Health Action Information Network concluded that a single course of antibiotics amounts to three days’ worth of wages; not much has improved since then.

MANILA – A consumers’ group observed the third anniversary of Cheaper Medicines Law by delivering to the government and to its health department, in particular, a “Kalabasa” or Squash award, in the hope that the government’s eyesight would improve to help it see the dire situation of public health in the country more clearly. “It is sad to think that the health department itself is the one promoting higher-priced medicines,” said Robert Mendoza, secretary-general of Alliance of Health Workers (AHW).

Mendoza aired this accusation as he criticized the government for having continuously slashed the budget of public hospitals over the years. Mendoza said “the DOH knows there are no more medicines in its hospital pharmacies, forcing patients even the poorest ones to go out and cough up money for medicines. But its prices, said Mendoza, remained too high for ordinary Filipinos because the government has failed to cut it down despite the Cheaper Medicines Law and its high-profile populist 50-percent reduction in prices of too few medicines a couple of years ago. 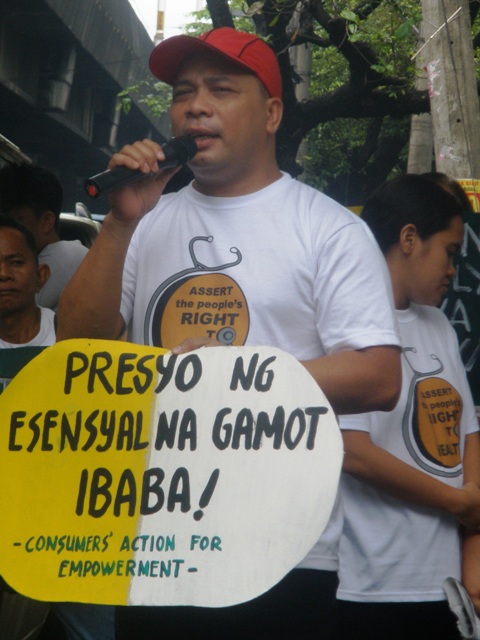 Robert Mendoza, secretary-general of Alliance of Health Workers, said “It is sad to think that the health department itself is the one promoting higher-priced medicines,” (Photo by Marya Salamat / bulatlat.com)

In a brief picket in front of the health department in Manila, members of the Consumers Action for Empowerment (CAE) took turns explaining why the RA 9502 or the Universally Accessible Cheaper and Quality Medicines Act of 2008 is a failure. They said it did not “democratize access to essential medicines” in the country. Some local drug manufacturers think it has benefited only some of the upper middle class to upper class who can buy medicines.

Medicines still out of reach

Because of “the poor’s plunging purchasing power,” the CAE said “majority of Filipino consumers still could not afford to buy life-saving drugs.” Until now, said Eleanor Nolasco, spokesperson of CAE, “few Filipinos can feel the price cuts in medicines.” Sean Vilchez, a nurse working at the Philippine Orthopedic Center and deputy secretary general of Health Alliance for Democracy (HEAD), lamented that until now, many of their patients are “under-medicated, with some dying because of lack of medicines”. 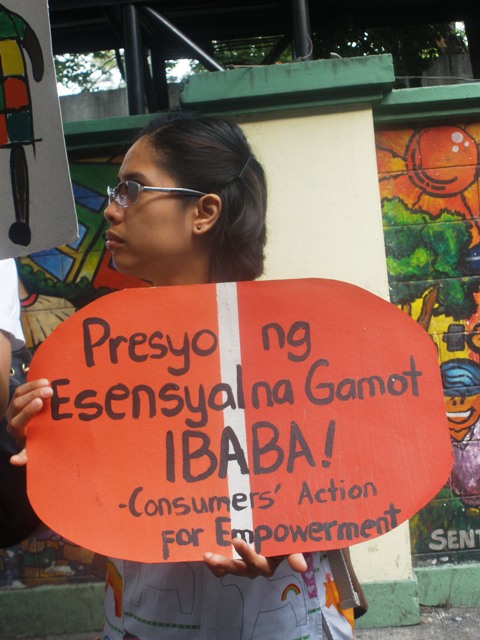 AHW member in a rally in front of DOH 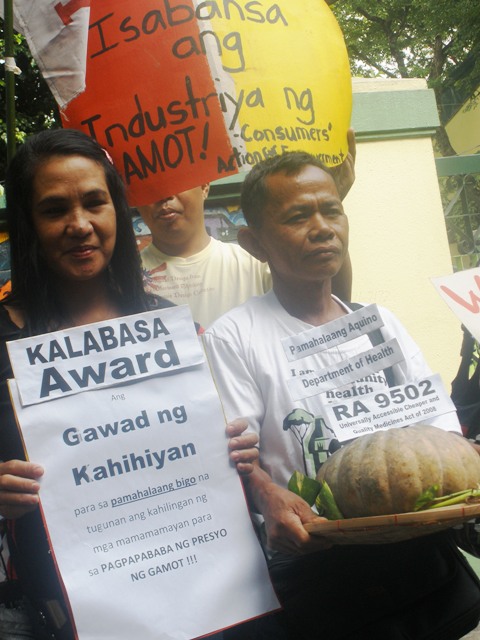 The consumers’ group dismissed the “token increase” in the minimum wage in the National Capital Region (NCR). They said the P22 emergency cost-of-living allowance hardly raised the real value of the minimum wages that is worth only P248 today when compared to 2000 prices. Unfortunately, the NCR wage rate practically serves like a ceiling amount for setting the wage rates in other parts of the country, even if prices of goods there are the same with those in NCR, if not higher like that of oil products.

The CAE reminded the public that in their study with Health Action Information Network in 2008, a single course of antibiotics amounts to three days’ worth of wages. But because the wages did not substantially increase while the prices of most medicines did not substantially decrease, not much has improved in terms of accessibility of medicines, the consumers’ group said.

Three years ago when RA 9502 or Cheaper Medicines Law was enacted, the CAE had immediately seen its major failings which they predicted would ultimately render it useless. Based on these failings, they foresaw its tragic failure in meeting its avowed goal of bringing down prices of medicines in the country.

Dr Geneve Rivera, secretary-general of HEAD, said, during their protest in front of the DOH, that far from developing the local drug industry that could have helped reduce drug prices, the law has “even paved the way for further commercializing medicines and medical services.” She traced this to the fact that RA 9502 did not raise a finger in removing the stranglehold in the country’s drug industry of foreign pharmaceutical corporations.