“Farmers are losing their land, their livelihood and their very lives because of this [bioethanol] project,” said, Dioni Yadao of Dagami San Mariano.

Supposedly cheaper, cleaner energy at the expense of the environment and the survival of thousands of subsistence famers and their families? It’s not worth it.

This was the declaration of members of the international fact-finding mission that looked into the circumstances of farmers in San Mariano, Isabela as they battle a bio-ethanol plant in their region. The mission has put together a long list to to back their claim that the supposedly environmental-friendly plant is a bane to farmers.

Neither idle nor abandoned lands

San Mariano is a an agricultural town in east Isabela some 400 kilometers north of Manila. It is the country’s largest municipality composed of 36 barrios and a general population of 44,718 people in 7, 796 households.

In 2006, the local government inked a contract with the JapaneseFilipino consortium GFI to begin a bio-ethanol project using sugarcane feedstock. The GI intendeds to sell electricity produced from the by-products of the sugarcane processing. The company aims to plant sugarcane in 11, 000 hectares covering17 barangays in Isabela province to be able to produce125,000 liters of ethanol daily or 54 million liter annually, making it the biggest bioethanol producer in the country. The plantation growing operations have been contracted by Ecofuel Land Development Inc.

According to reports, the bioethanol corporation is slated to be fully operational by March 2012, but even now the disastrous impact of the project is already being felt by residents. 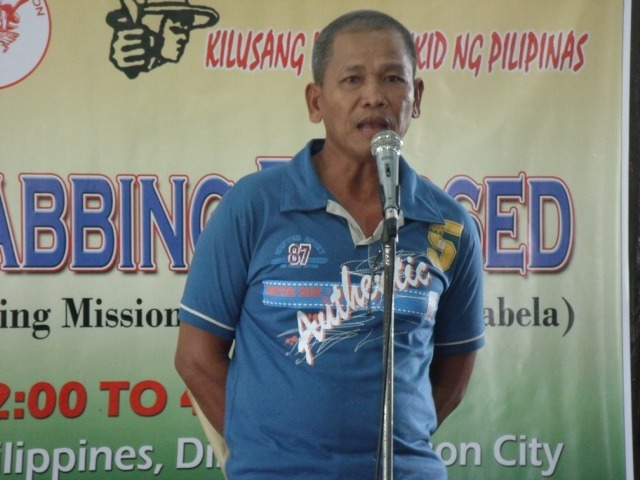 “Agricultural land that used to be devoted to rice, corn and vegetables are now being planted with sugarcane and farmers do not, in any way, benefit from this. From being farmers, we’ve become farm workers and vulnerable to more abuses,” says Diony Yadao, farmer and leader of Dagami, San Mariano.(Photo by Ina Alleco R. Silverio / bulatlat.com)

“Farmers are losing their land, their livelihood and their very lives because of this project,” said, Dioni Yadao of Dagami San Mariano. “We cannot eat sugarcane, and we cannot sell it either. Agricultural land that used to be devoted to rice, corn and vegetables are now being planted with sugarcane and farmers do not, in any way, benefit from this. From being farmers, we have become farm workers and vulnerable to more abuses.”

“This despite the almost complete lack of support from the government. Farmers receive no help from the LGU or any government agency to help them shoulder the high costs of farm inputs. Seeds, fertilizers and pesticides are sold by commercial traders and these same traders are also the ones who buy the produce. This system ensures that the traders make enormous profits but farmers earn almost nothing,” he said.

Yadao hotly disputed the claim of the government and the GFI that San Mariano was chosen as the project site because many land areas there were “idle and abandoned.”

“A majority of San Mariano residents are farmers. We survive by cultivating the land. Every inch that can be planted with rice, corn, pineapples or vegetables is used, but the Department of Environment and Natural Resources (DENR) has classified many areas as protected areas. We have discovered in the last four years how the DENR lied to farmers and has in fact leased hundreds of supposedly protected land areas to agricultural commercial interests,” he said.

Edna Maguigad of Searice also belied claims that the majority of San Mariano lands were no longer viable for rice and corn. She said that in 2003, the total area used for agriculture purposes spanned 33, 262 hectares, and of this, 14, 927 hectares was planted with corn. Land use date for 2009 in the meantime states that 29,264 hectares was devoted to agricultural use.

“It’s true that the productivity of the land has been declining through the years, but it’s not the fault of farmers but the government itself and the lack of a genuine agrarian reform program. The use of artificial pesticides and fertilizers has also severely damaged the land: famers have been forced to rely more on more on these farm inputs sold by traders. Local rice varieties have almost died out because the influx of commercial seeds sold by multinational seed corporations.”

Maguigad said that San Mariano used to have at least 25 dozen local rice varieties such as Palawan, Mimis, Bungang Kahoy, Comoros, Batangas, Balatinao, Bungkitan, Pinilisa-and Tamsi, but now only nine local varieties remain and only five percent of farmers use them.

Feny Cosico of Agham said that claims that bio-ethanol sourced from sugarcane is good for the environment is not completely-true.

“For one thing, it has been proven that monoculture planting is bad for the soil and bad for the environment. Monocrop planting heightens soil degradation; it destroys complex ecosystems. For another, sugarcane itself is uses up a lot of water. Planting sugarcane for long and extended periods sucks up the soil’s nutrients and all surrounding water sources,” she said.

Cosico said that sugarcane plantations also have a tendency to negatively impact on water sources, fouling river systems and causing damage to habitats.

“It’s true that sugarcane does not require any specific type of soil, and that it can be planted on almost any kind of soil; but it does cause soil erosion. Soil degradation is caused by erosion and compaction, which in turn reduces soil’s ability to filter water. Sugarcane plantations have been seen to cause the deterioration of wetlands, streams, rivers and reservoirs due to silt and sediment. In the meantime, they also transport pollutants and chemicals via silt. It has been documented that waste water from processing sugarcane also depletes oxygen in water systems Heavy use of nitrogen fertilizers leading to the destruction, poisoning of estuaries, forests, even protected wetlands,” she said.

According to Cosico, if the project pushes through, the region’s food production capacity will be significantly reduced, and there will be further encroachment of forest areas as farmers will clear new lands to farm for food.

“The conversion of lands once allotted for diverse cropping and forest cover will lead to significant carbon emissions and biodiversity loss. It is also a threat to the declared protected areas such as the Sierra Madre Natural Park that covers forest ecosystems of San Mariano. The forest ecosystem, specifically the watershed nourish the river systems that have been providing water resources to the food production of the communities,” she said.

She also said that San Mariano and surrounding areas will also be even more vulnerable to landslides and flooding.

“The GFI bio-ethanol plant has been given a lease that lasts up to 50 years, and can be renewed for another 50. After all that time, nothing would be left of San Mariano. The soil, the environment would have been destroyed, and long before that the livelihood of the residents. The benefits of the bio-ethanol plant are very negligible if compared to the destruction it can and will cause,” she said.