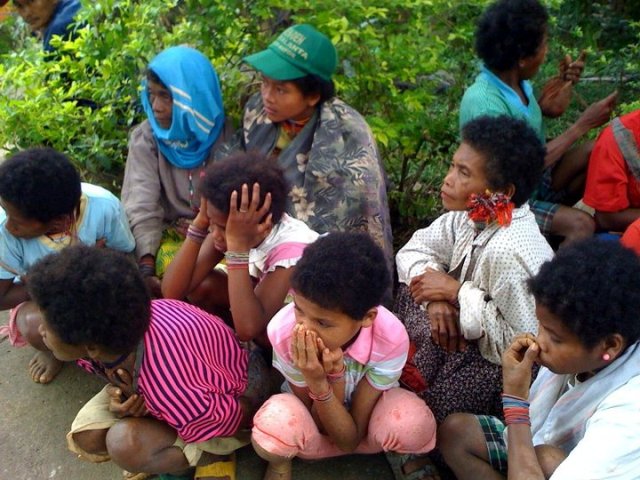 Farmers including indigenous peoples of San Mariano are under siege.The FFM discovered that land-titling syndicates operate fraudulent titling schemes in connivance with government officials. Officials and employees of the Department of Agrarian Reform, the Department of Environment and Natural Resources (DENR), Registry of Deeds and the Land Bank of the Philippines are supposedly involved.(Photo courtesy of Raymund Catindig / bulatlat.com)

The FFM team also discovered that that Eco-Fuel Land Development Inc. is guilty of many labor rights violations. The farmworkers (many of whom were previously small –scale farmers, but were displaced by the project and land grabbing syndicates) told the FFM team that they were paid P15-30 a day (US $ 0.35-0. 70) to weed and spray fields, and P100 ( $2.30) to harvest the suragcane crops. The company does not provide its workers meals, either. This was part of the pakyaw or fixed rate system which is the most exploitative wage system.

The farmers also said that sometimes, their wages were delayed or withheld for three to seven days on an alternating schedule. They were required to bring their own equipment to work, and paid only if they perform a combination of tasks such as harvesting and loading and not only one type of work.

The farmers were also ordered to spray toxic fertilizers and pesticides without proper safety equipment. Many of them suffered headaches and skin rashes, and their clothes were contaminated beyond cleaning. As their clothes ended up being washed along with the clothes of everyone else in their respective families, other family members were also in danger of being contaminated.

In the meantime, not only did the farmworkers receive illegally-low wages, they were also denied health security and benefits. Those who suffered injuries in the course of working in the fields did not receive any financial assistance from the company. They also slaved for six days straight and without even short-term job security.

In Barangay Pannanin, they discovered that there were at least 60 cases of impending land foreclosures of the Certificate of Land Ownership Awards (CLOA) by the Land Bank of the Philippines. Families who have lived for generations in various homesteads are also being threatened by eviction.

Cita Managuelod of Sentra-Cagayan Valley gave a presentation on the various land disputes in the region, saying that GFI has used various insidious tactics to stake the land from the farmers and the indigenous peoples.

“GFI made the promise to residents that those who will use his land for sugarcane production as feedstock will be given land rent of P20,000 per year (US$465). Some farmers, because of sudden and urgent financial need, agreed, but to their dismay they discovered that the GFI reduced the payment to only P5,000 (US$116) annually. Many farmers have been reduced to penury when previously they lived independent lives. Now they don’t even have land where they could plant vegetables for personal consumption,” she said.

According to the FFM team, many farmers, and indigenous peoples occupant-tillers have applied for patents to own the lands they cultivate, but most of these applications were denied. The team also documented numerous cases wherein land-titling syndicates operate fraudulent titling schemes in connivance with government officials. Residents said that officials of the Department of Agrarian Reform, the DENR, Registry of Deeds and the LBP are involved in scams that has victimized hundreds of farmers including indigenous peoples.

“First the land titling syndicate offers farmers their free services to survey their land and process the documents. The farmers will be shocked to find out afterwards that the documents were put under the name of other, unknown individuals,” she said. According to Managuelod, the syndicate is headed by a certain Nenita Balmaceda Perez and a few employees of the DENR.

Perez and her team then immediately declare the titled lands –either documented as homesteads or viable farmland – under the VOS process. The individuals in whose name the fraudulent titles were made are allegedly employees or connected to the DAR and the Regional Land Bank, and the receive P70,000 (US$ 1,628) per hectare or P546,000 (US$12,697) per lot which is equivalent to 7.8 hectares.

There are other means by which the farmers are tricked or manipulated out of their land.

The peasant advocate said that the Land Bank announces that the farmers’ lands are under CLOAs and that they owe P35,000 (US$ 814) per hectare or P273, 000 (US$ 6,348) per lot plus interest for the next 30 years. Since most famers cannot afford this, their lands end up being foreclosed.

The lands under foreclosure for non-payment of CLOA will then be sold to land grabbers with fake titles. Inevitably, most of the titles end up with the bio-ethanol project. Currently, some 6,240 hectares of land have been placed under fake land titles and the over-all amount generated by the fake VOS scam has reached P448M (US$111,628).

“The residents have also reported that there has been an increasing presence of soldiers and military camps in areas where there is a growing opposition to the project. Those who are against the project become victims of human rights abuses: soldiers subject them to tactics of intimidation and coercion. Some residents have been accused of being sympathizers of members of the New People’s Army (NPA). They are also delisted as potential recipients of conditional cash transfer (CCT) from the Pantawid Pamilyang Pilipino Program (4Ps) and denied issuance of certificates of indigence to avail of free social services,” Managuelod said.

In protest, various church leaders as well as hundreds of other community members have signed and circulated petitions calling for the immediate removal of the Armed Forces of the Philippines (AFP) military detachment in residential areas.

“These abuses are in clear violation of the terms of the Comprehensive Agreement on Respect of Human Rights and International Humanitarian Law (CARHRIHL) and must be addressed with urgency,” they said.

The FFM team made the recommendation to call for the GFI project’s delisting from the Philippines CDM (Clean Development Mechanism) efforts. They said that monocropping for biofuel is a form of ecological destruction which will worsen problems related to global warming, land erosion and loss of biodiversity.

The CDM is defined in Article 12 of the Kyoto Protocol, an international agreement linked to the United Nations Framework Convention on Climate Change. It allows a country with an emission-reduction or emission-limitation commitment to implement an emission-reduction project in developing countries. Such projects can earn certified emission reduction (CER) credits.