You Are Here: Home → 2011 → June → 10 → Pamalakaya demands relief for fishkill-affected fisherfolk,dismantlement of all commercial fish pens

An activist fisherfolk alliance is deeply disappointed with the “Star for All Seasons” and Batangas Governor Vilma Santos.

The Pambansang Lakas ng Kilusang Mamamalakaya ng Pilipinas (Pamalakaya) has expressed disappointment over Santos’ cold response to its appeal that the Batangas local government release economic aid for the thousands of small fisherfolk affected by the massive fish kill in Taal. The group said that it has 23,040 members dependent on the lake for their livelihood.

“Santos and Vice Governor Mark Leviste should forget their respective political plans to win in the 2013 national and local elections if they fail to respond to this appeal for help on behalf of the fisherfolk affected by the fish kill,” said Pamalakaya national chairman Fernando Hicap.

Hicap said this in reaction to Leviste’s statements to the media saying that the provincial government cannot release the P 90 million ($2.07 million) calamity fund allocation because it is intended to be released on September and October in anticipation of future typhoons and the possible eruption of Taal Volcano in the second half of the year. Leviste said that the calamity fund is not only for fisherfolk affected by the massive fishkill.

“They would not have said this to the large fish pen or fish cage operators: the local government is quick to come to their aid when they seek it. When it’s the small fisherfolk who demand assistance, they are told to wait for September or October. The Batangas local government is adding serious insult to injury to the plight of small fisherfolk under its jurisdiction,” said Hicap.

The group earlier proposed a P5,000 (US$116) to P10,000 (US$232) economic and calamity assistance for every fisherfolk family affected by the fish kill in Taal Lake. It also said that the national government, through the National Food Authority (NFA), should provide families with a month’s supply of free rice. 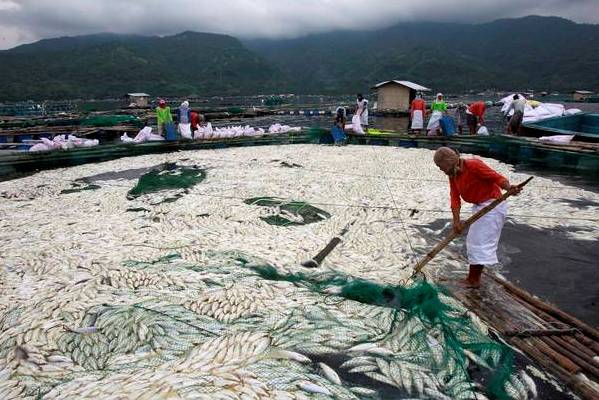 Fishermen remove dead fish from cages after a massive fish kill at Taal Lake in Talisay, Batangas. According to the Bureau of Fisheries, fish pens should each contain not more than 10 tons of cultured fish, but some contain at least 25 tons. The fish compete for oxygen, but because the pens are too small and there are too many fish in them, the fish die. (Photo courtesy of Gerry Albert Corpuz / bulatlat.com)

Hicap said that the national and local government allowed aquaculture companies to put fish pens and fish cages in 14,000 hectares of the 23,040 hectares of Taal Lake.

“Some 60 percent of Taal Lake waters have been occupied by aquaculture companies for decades now. There’s no truth to the government’s allegation that these fish pens are illegal: they have been actually allowed to operate legally in exchange for big taxes and fat commissions for crooks in power,” he said.

The fisherfolk leader said that the same is happening in Laguna Lake where almost 60 percent of the 94,000 hectare lake has been was leased to big fishpond operators by the Laguna Lake Development Authority.

“For the last 24 years, Pamalakaya had been telling the national government to refrain from awarding fishpond lease contracts to big time fishing groups and individuals to prevent overcrowding, exploitation and fish kill, but our proposals always fall on deaf ears,” he said.

Hicap said the fish kills in Anda and Bolinao in Pangasinan and in Taal Lake are a result of long-running abuse coupled with the dumping of waste waters from industrial and commercial establishments and the privatization and conversion efforts in coastal areas.

Provide relief to impoverished sectors, not only fish pen operators

In a press statement, Pamalakaya’s provincial chapter Haligi ng Batanguenong Anakdagat (Habagat) and its regional chapter Pamalakaya-Timog Katagalugan asked Santos and Leviste to immediately provide food packages, school supplies and other forms of material assistance to small fisherfolk affected by the ongoing fish kill which reports said could continue until the end of June.

Habagat and Pamalakaya-TK protested that the main focus of government aid and attention were the operators of large-scale fish pens and fish cages. They said that the urgent needs of the impoverished sectors of the fishing population were either completely ignored or taken for granted. The groups also called on the government should launch an information campaign on the real cause of the fish kill. Already, some 2,000 metric tons of milkfish and other varieties endemic to the lake have been lost, equivalent to P 200 million (US$ 4.6 million) as of the previous weekend.

Habagat and Pamalakaya-Southern Tagalog will also hold a fact finding mission in affected areas mainly Talisay and Laurel to determine the socio-economic impact of massive fish kill. The group’s chairman Isabelo Alicaya said the fact finding mission will be composed of 50 fisherfolk leaders and environmental advocates.

“We will immediately present findings after the fact finding mission to the Filipino public, to the provincial government of Batangas and the four congressmen of the province for a comprehensive understanding and identification of appropriate resolution to the long-running dilemma of fish kill and other forms economic and environmental disaster that regularly contaminate the people and ecology of Taal Lake,” Alicaya said.

Pamalakaya’s Hicap said that as taxpayers and food producers in Taal Lake, the residents around Taal Lake are well-justified in asserting their right to be given economic relief and calamity assistance.

“It’s lamentable that as of now, the promises made by Gov. Santos have yet to translate into concrete action. We have a real economic and environmental disaster, but the Batangas local government is taking its sweet time to respond. Ms. Santos should be reminded that this is not a movie shoot, and we’re not filming a disaster movie. This is for real and we’re running out of time,” he said.

Pamalakaya said if the four district representatives would share at least P 25 million (US$577 thousand) of their yearly P 70 million (US$1.6 million) pork barrel, they would be able to add P100 million (US$2.3 million) to Batangas’ P 90 million (US$ 2.07 million) annual calamity fund.