In his first year, Aquino did nothing to improve education, bring down fees — Anakbayan

On June 13, the second Monday marking the official start of the 2011 school year, university students from various universities all over the country held coordinated protests against what they said was the failure of the government of Benigno Aquino III to improve the system of education and put an end to tuition increases.

“A year into Aquino’s administration, the Filipino youth are nowhere near enjoying free and quality education. the government still considers education a privilege than can only be enjoyed by those who can afford to pay rising costs of tuition,” said Anakbayan chairman Vencer Crisostomo.

Despite soaring prices of commodities and basic services such as transportation, electricity and water, the CHED allowed 281 universities to hike their tuition this year. Other schools have undertaken “creative schemes” to charge students more, such as what the UP has done through its Socialized Tuition Fee Assistance Program ( STFAP).

The head of the CHED, Patricia Licuanan, was recently quoted as saying that “commercialization (of education) is wonderful.” 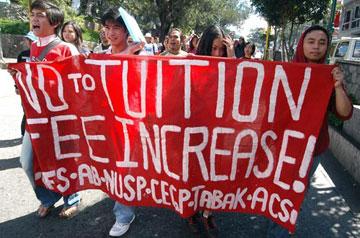 Students protest against the commercialization of education. Commercialization in the form of deregulated tuition and other fees, has resulted in the nationwide tuition average increasing to P501.22 per unit. They say that the Aquino government in its first year in office failed to uplift the state of education in the country. (Photos courtesy of Anakbayan / bulatlat.com)

“We will never tire of telling the government that commercialization is never good, it’s not wonderful at all. It’s putting a price tag on education, handling it like it’s a luxury item. Commercializing education automatically denies majority of the poor from having access to it, and what kind of society can be built when most members of the population are denied access to learning?,” said Crisostomo.

The youth leader went on to say that commercialization, in the form of deregulated tuition and other fees, has resulted in the nationwide tuition average increasing to P501.22 (US$11.66) per unit. A 20-unit semester, amounting to P10,024.(US$233) , is equivalent to 29 days’ earnings of the average Filipino worker.

“Under a government that treats education as a commodity, instead of a right, we fear that more education budget cuts and continued deregulation of tuition fees are awaiting the Filipino youth along the ‘Daang Matuwid'” he said.

In the meantime, the College Editors Guild of the Philippines (CEGP) said that the anti-student education policies of the government also encourage school administrations to continue attacking campus press.

Cristopher Pasion, CEGP national deputy secretary general said that during the most recent national convention of the CEGP, delegates reported around 190 cases of campus press freedom violations such as non-mandatory collection of publication fees, withholding of funds and harassment of staffers.

“Campus press repression is inextricably tied to the crisis in education,” he said.

Jemimah Garcia, chair of the UP Diliman University Student Council (USC) said that the tuition fee increase in UP expose the government’s irresponsibility in guaranteeing the right of all Filipinos to education. Garcia was one of the speakers in a lightning rally held at the UP Theater in Diliman where an estimated 1,750 freshmen were gathered for the traditional Freshmen Welcome Assembly (FWA). A similar protest was also held at the nearby UP Film Institute, where students from UP Manila held their own FWA.

In the meantime, the excessive increase in tuition and other fees have reportedly contributed to the decision of students in the regions to discontinue their formal education or to change schools.

According to Antonio Pasco Jr. Anakbayan -Northern Mindanao Spokesperson, the tuition hikes have resulted to lower enrollment in private schools while increasing density in state universities and colleges. “These same SUCs have been receiving less and less support from the national government forcing them to also charge higher fees. Many students chose to discontinue their schooling,” he said.

Pasco said that in Cagayan de Oro, Anakbayan noted that 11 Higher Educational Institutions (HEIs) increased tuition. The increases range from 4-15 percent. A total of 23 HEIs all over Northern Mindanao increased tuition this year.