Residents interviewed by the NFFM delegates said no public consultations were held and that they were not familiar with Apeco.

The AMGL said the law was enacted behind closed doors. There were no committee hearings held and no opposition was recorded. The Senate Bill 3470 was filed by Sen. Edgardo Angara and the House Bill 6213 was filed by his son Juan Edgardo “Sonny” Angara.

Pamana said that even Casiguran Mayor Reynaldo Bitong was never consulted in the process.

The NFFM reported that elements of the the 48th Infantry Battalion, Bravo Company were deployed in various villages such as Estevez, Nipoo, Cozo, Culat.

In Estevez village, a team of NFFM delegates went to the village hall occupied by soldiers and talked to Col. Julius Gawid. Gawid told the team that they were deployed there for Bayanihan projects that include building of public comfort rooms, repairing classrooms, constructing a deep well and to assist in disaster relief and rehabilitation activities. 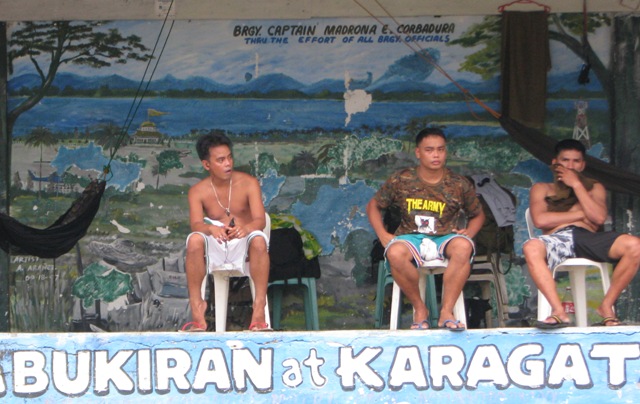 Gawid admitted that they are staying at the village hall. ““We asked why they are using civilian buildings for their operations and Lt. Julius Gawi, the platoon leader, said that they are conducting Bayanihan,” Danilo Ramos, KMP secretary general, said. “Their presence poses a danger to residents in case armed clashes occur.”

In Dibet village, soldiers are staying beside the village hall. In the villages of Cozo and Culat, soldiers hold regular patrols.

Elmer Dayson, Pamana vice chairman, noted that the military openly admitted that their presence in Aurora is to protect Apeco.

“The whole province is controlled by the Angaras. Government agencies such as the DENR, NCIP [National Commission on Indigenous Peoples], Armed Forces of the Philippines are at their disposal for the implementation of Apeco,” Dayson added.

Dayson said Apeco would exploit the rich aquatic, mineral and other natural resources of the province.

“Apeco is a huge disaster that will hit Aurora and the Angaras are crocodiles with insatiable hunger,” Dayson said.

Dayson said that there are mining applications in Dinalungan, Casiguran and Dilasag towns. “Offshore mining will destroy the environment and reduce significantly the fishermen’s catch,” he said.

Dayson noted that Apeco is anchored on Special Economic Zone Act of 1995 or Republic Act 7916 that, Dayson said, aims to peddle the country’s natural resources to foreign investors.

Canlas said it is part of the Aquino government’s Public-Private Partnership (PPP). “Aquino should stop the implementation of Apeco as this is a waste of public money and its projects are totally in contradiction with the people’s interest. Development does not mean wiping out communities of farmers, fisherfolk and indigenous peoples,” said Canlas.