This is the mark that various progressive groups gave President Benigno S. Aquino III on his first year in power.

While Aquino is about to report his one year “achievements” and launch his new campaign called “Pilipinas Natin” at the PhilSprots Arena (former Ultra), progressive groups led by Bagong Alyansang Makabayan (Bayan) marched to Chino Roces (formerly Mendiola) bridge, June 30, to express indignation over the failure of Aquino to address the urgent issues of the people.

“The first year of the Aquino government saw the continuation of many of Arroyo’s economic policies along with continued subservience to foreign dictates, lackluster performance in going after the plunderers and human rights violators of the past, and increasing factionalism within his administration,” Renato Reyes Jr., secretary general of Bayan, said.

“Last year, Aquino said that people can now dream, but how can people start to dream when they have nothing to eat, people are still hungry, the prices of commodities are continuously rising and wages are nailed to the ground?” asked Joan Salvador, deputy secretary general of Gabriela. 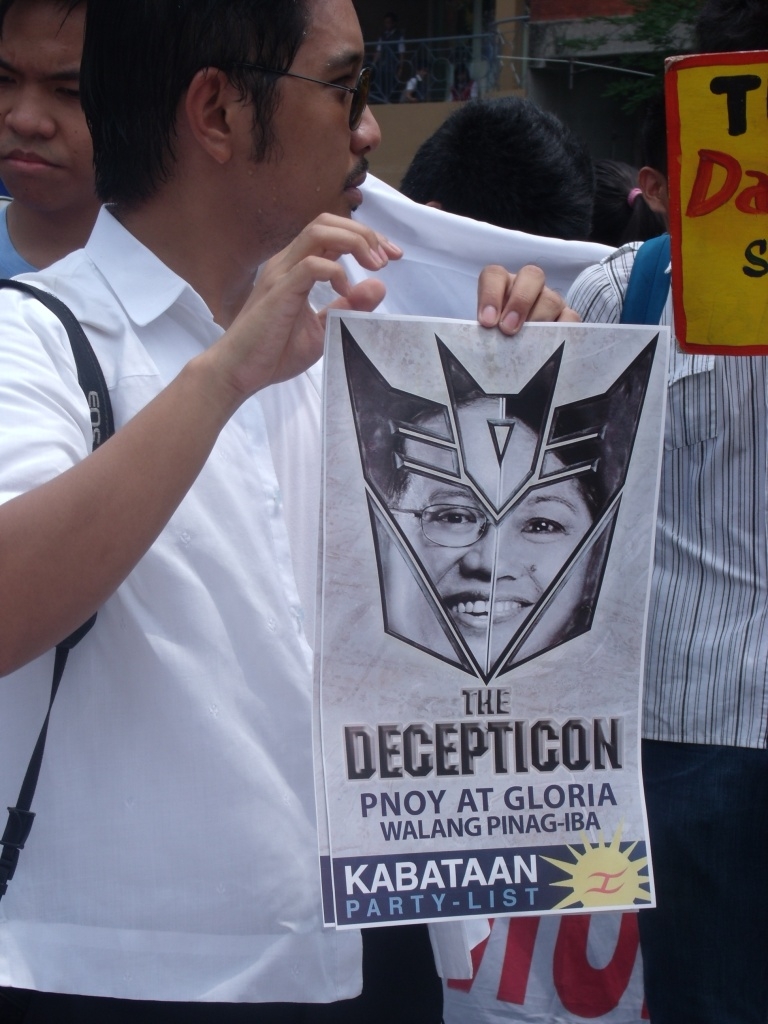 Reyes added that the so-called “daang matuwid” (straight path) has been panned because of the poor performance of the Aquino regime in the areas that count most for ordinary Filipinos.” Aquino’s “daang matuwid” has turned out to be one full of roadblocks, expensive toll gates, potholes, and wrong directions.”

According to Bayan, the issues that Aquino failed to address are; filing charges against former president Gloria Macapagal Arroyo; rising unemployment, inflation, hunger; there are 48 victims of extrajudicial killings in one year and still no accountability for rights abuses of the past regime; failure to bring about genuine land reform and national industrialization; problems in governance involving Aquino’s “kakampi, kabarkada, kaklase, kabarilan” appointees; no results on the review of the RP-US Visiting Forces Agreement despite an earlier campaign promise.

“Pilipinas Natin” for whom?

“Today, Aquino launched his new campaign called ‘Pilipinas Natin’, sounds like we are all included. But how could he say Pilipinas Natin when people are in dire poverty, people have nothing to eat, and landlords still own the lands. Surely, it is only Aquino’s Kaibigan (friend), Kaklase (classmate) and Kabarilan (shooting buddy) (KKK) who will benefit from this so-called campaign.”

Reyes added that a true “national unity” should genuinely benefit the people. “National unity and solidarity is commendable, but this has to serve genuine change and not just what is politically expedient. There can be no ‘Pilipinas Natin’ when majority of the people are poor, when 11 million are jobless and when millions experience hunger. There can be no ‘Pilipinas Natin’ if vast tracts of land are owned by a few families like the Cojuangco-Aquinos.”

Reyes said that a true national unity should bring about genuine land reform, national and pro-Filipino industrial development, respect for human rights and a just and lasting peace. “The question is, is the Aquino government capable of fostering such unity? Or will “Pilipinas Natin”, like its predecessor “daang matuwid,” turn out to be another empty one-liner? Is it Pilipinas Natin or Pilipinas Namin?” 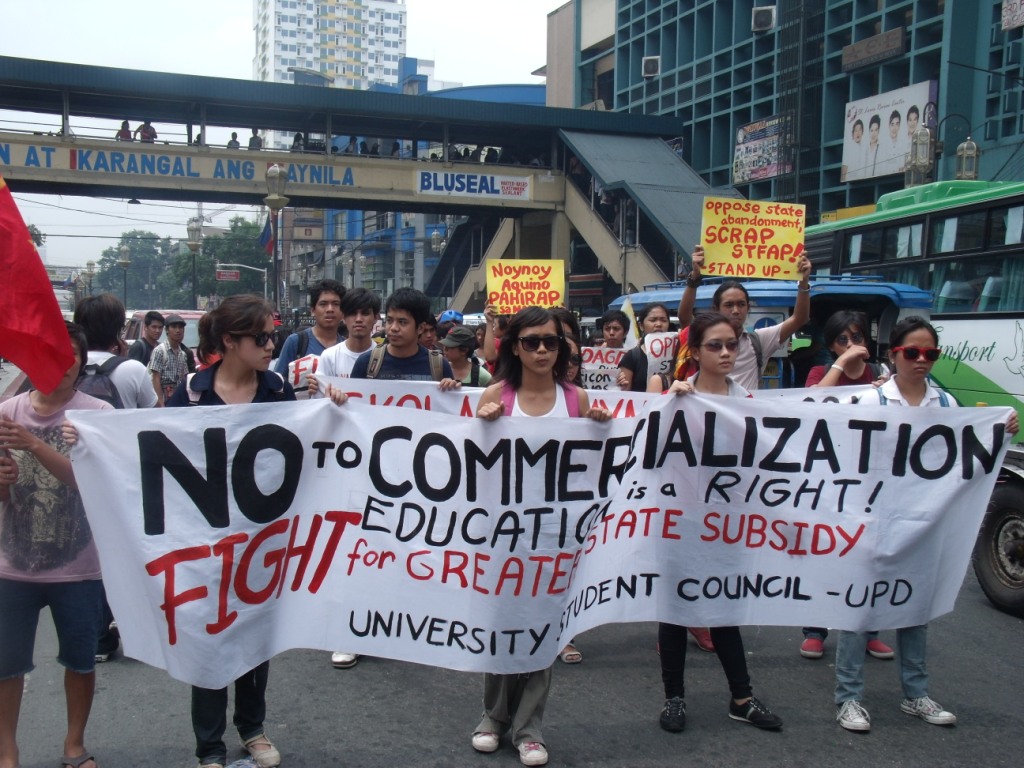 It is also during his one year celebration that Aquino reported about his administration’s achievements. Aquino boasts that in one year, he brought about change and improved people’s lives when Arroyo stepped down from the presidency. Reyes, on the other hand, said Aquino’s report is just empty words.

Independent think tank group Ibon, however, called the CCT as a stopgap measure like the “Pantawid Pasada” or the measly subsidy for public utility vehicles.

“True to his haciendero background, Aquino has not mentioned land reform in any of his speeches or major policy pronouncements,” Ibon noted.

“Housing, rice, security, wages, roads, subsidy for public utility vehicles and lifesavers for our countrymen drowned in poverty: this is the change we are reaping now,” Aquino further said.

But Ibon’s data show that public-private partnership (PPP) projects have displaced tens of thousands of Filipinos such as in the North and East Triangle for the P22 billion($ 51 million) Quezon City Business District. 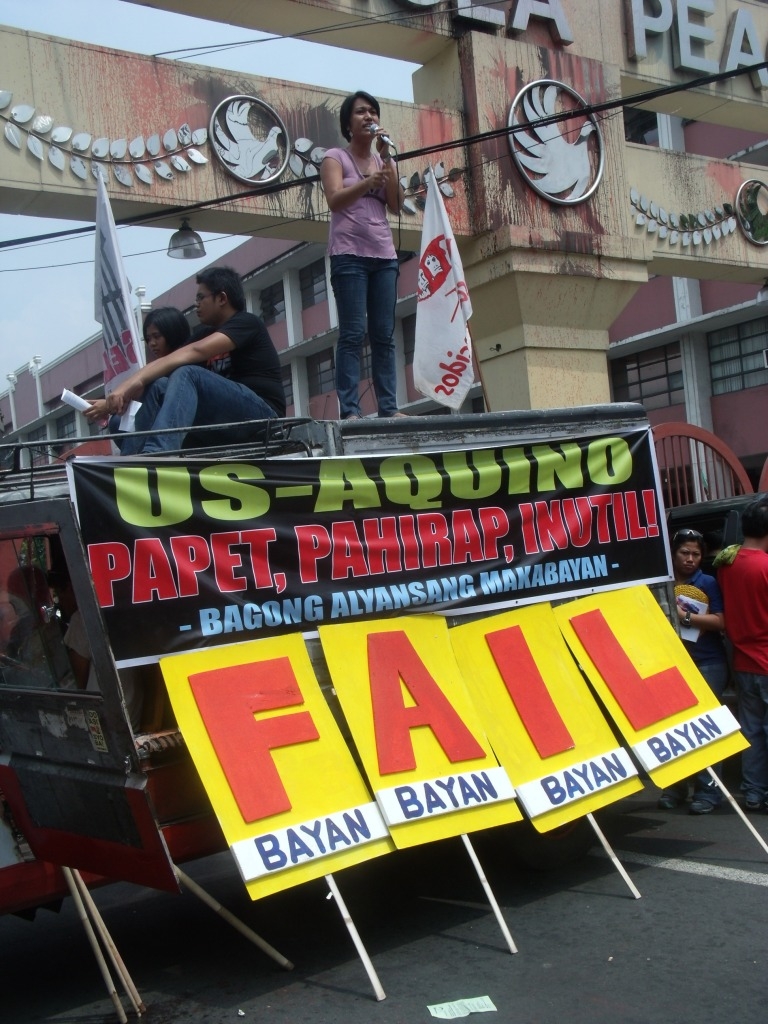 Ibon also said that there are some 4.5 million unemployed Filipinos and wages remained pegged at meager amounts, making it consistently difficult for Filipinos to cope not only with rising food and oil prices and increasing utility rates but also with more expensive education, health and housing.

“Good governance means direct benefits for the Filipino people, especially the poor: every medicine being subsidized by the government for the poor, every inch of road, every opportunity to find decent livelihood—all of these are products of the integrity and concern of your government working with the people,” Aquino said.

Ibon belied this claim, saying that the Aquino administration is cutting back on social services. “The administration’s first budget, for 2011, still gives more priority to debt service than to social services. The budget for total debt service, interest and principal, increased by P80 billion to ($186 million) P823 billion ($191 million) – while the education budget increased by just P31 billion (to P272 billion) ($63 million) and housing by P273 million ($6.3 million) (to P5.7 billion), with the health budget even reduced by P1.4 billion ($3 million (to P39 billion).”

Meanwhile, Kilusang Mayo Uno’s chairman Elmer Labog said in a statement that Aquino’s June 30 speech shows that he has nothing to be proud of after one year in office. “Nothing new: he again focused on his anti-corruption campaign and blamed the country’s problems on the previous administration, despite the fact that he has done nothing significant to bring Arroyo to justice. Amid intensifying poverty and hunger, Aquino took the easy route and resorted to vague generalizations whenever talking about the economy. ” “There is no other boss for this president other than the landlords, big and foreign companies.” Salvador said.