“Landlords, land grabbers, corrupt governments and imperialism – we must all fight and defeat them. The landlords say they will never give up their lands, but what is stronger than their greed is the righteousness of our struggle for land and our humanity.”

MANILA — Activist from India Malem Ninsthoujia is indignant. It is the day after the Supreme Court issued its decision scrapping the Stock Distribution Option (SDO) scheme in Hacienda Luisita and he echoes the anger of farmers from Central Luzon and everywhere else in the country in saying that the High Court’s verdict is deceptive.

“The farmworkers of Hacienda Luisita demand that they be given control and ownership over the land so long denied them by a fake agrarian reform program. The Philippines’ justice system leaves much to be desired when it comes to upholding the rights of farmers,” he said.

Then he directly addressed the audience comprised of farmers, peasant leaders and agrarian rights advocates.

“Fellow farmers, comrades, always hold your head high! We are the tillers of the earth, we are the ones who feed humanity. We must never forget that in our work and in our struggle for genuine agrarian reform all over the world there is dignity!”

Peasant leaders and agrarian reform advocates from India, Nepal, Sri Lanka, Malaysia, Indonesia, Pakistan, Argentina, Kenya, Cambodia, Senegal, Cameroon, Burundi joined their Filipinos counterparts in the first “International Speak Out Against Global Land grabbing” held in Quezon City. In a lively protest and program in front of the Department of Agrarian Reform (DAR) offices, the internationalists expressed strong solidarity with Filipino farmers and the rest of the Filipino people in pressing for immediate reforms. 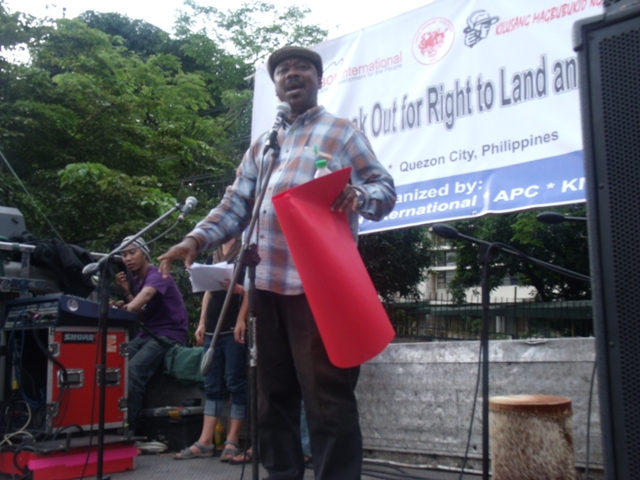 In a lively protest and program in front of the Department of Agrarian Reform (DAR) offices, the internationalists express strong solidarity with Filipino farmers and the rest of the Filipino people in pressing for immediate reforms (Photo by Ina Alleco R. Silverio / bulatlat.com)

Nepalese activist Balram Banskota of the Asian Peasant Coalition (APC) said farmers in his own country have learned through the years to be more aggressive in pressing for their democratic rights. He said that the radical political upheavals in Nepal have served to strengthen the farmers’ movement in the country.

“We work every day, we sleep without having eaten. As we suffer the landlords remain lazy but rich because we pay them with our life’s blood. The political upheavals in Nepal, however, have wrought changes: we are now committed to the fight for genuine agrarian reform and it is the landlords who now fear landlessness and poverty. In the ongoing construction of our developing society, farmers are making sure that we incorporate in the new constitution the life and death issues of lad reform and food security. I am certain that this, too is in the agenda of farmers in the Philippines as they demand their rights in the streets and in the halls of parliament,” he said.

Moses Shaha from Kenya in the meantime offered a hand in unity with Filipino farmers. The national chairman of the Kenya Small Scale Farmer Forum and secretary general of the Eastern and Southern Africa Small scale Farmers’ Forum (ESAFF), Shaha said that farmers all over the world must fight against “state terrorism” of governments who serve the interests of multinational and transnational corporations.”

“My skin color is different from yours, but my blood is like that which flows in your own veins. The struggle of farmers in Mozambique, Malawi, Rwanda, Madagascar and all over Africa is no different from the fight of Filipino farmers: we are all tillers, and we must own the land we till! Governments democratically elected should obey the word of their constituents. Leaders who do not listen to their people have no right to belong to them – they belong to those who pay the dollars. Corrupt and anti-farmer leaders trade the welfare and very lives of their people in exchange for dollars from the MNCs and TNCs and they should not be allowed to remain in power,” he said.

Shaha said that all over the world farmers should remain steadfast in fighting for land. ?“This is a war we fight for our children, for our future and the future of humanity. The landlords, the land grabbers think we have mashed potatoes for brains – we must show them how wrong they are and that we know how to build societies and nations because it is us who feeds the people! We are the scientists of the land, and in all venues of social debate and policy construction, farmers must be heard and our demands heeded,” he said.

Two peasant rights advocates from Indonesia and Senegal called on women farmers to take a more active role in organizing peasants to fight for agrarian reform.

“Land is life, and we must defend the land the same way we defend our lives and that of our children!” she said.

Menu Nilukshikade Silva from Sri Lanka’s Vilkapani National Women’s Federation said that women farmers should also work to preserve agricultural traditions that protect the environment and the land. “We should preserve ways of planting that do not destroy the environment because of the use of pesticides and chemical fertilizers. We are farmers, we know the land that feeds us; we must protect it,” she said.

Despite the language difficulties, peasant rights leaders from Argentina and from Senegal gave rousing speeches of solidarity. They spoke through interpreters, but their delivery in their own languages left no room for doubt of their sincerity.

Pablo Paillole from the Federacion Agraria Argentina said that the courts and other government institutions in Argentina were also corrupt like those in the Philippines, but this by no means should discourage Filipinos in continuing their campaigns for their own rights.

“Landlords, land grabbers, corrupt governments and imperialism – we must all fight and defeat them. The landlords say they will never give up their lands, but what is stronger than their greed is the righteousness of our struggle for land and our humanity,” he said.

Internationalism for land rights has no boundaries

“Land grabbing is an international phenomenon that attacks the welfare and very survival of millions of farmers and their families. The governments of powerful countries such as the United States, China, Japan and the members of the European Union have extended the reach of their influence to take over productive agrarian land in the Philippines. We are grateful to the support we are being given by our allies in peasant advocacy groups all over the world,” he said.

Ramos said that the incumbent administration under President Benigno Aquino III is continuing the trend set by the previous president Gloria Macapagal-Arroyo in disposing of agricultural lands for foreign ownership and use.

He cited the results of recent fact-finding missions wherein it was exposed that a total of 11,000 hectares of agricultural lands in San Mariano, Isabela is now being eyed for bio-ethanol projects by foreign investment groups and companies such as the Japanese Green Futures Innovation (GFI). The lands were previously devoted to root crops like rice, corn and vegetables; now these are being planted with sugarcane for the mass production of bio-ethanol projects for the use of Japanese industries.

The APC and the People’s Coalition on Food Sovereignty (PCFS) have noted that the Philippine government has been increasingly allowing foreign investors to lease and even own thousands of hectares of agricultural lands. This policy, they said, has resulted to massive displacement of farmers and the destruction of communities including those of indigenous peoples.

During the Macapagal-Arroyo administration, the Philippine Agribusiness Development Corporation Center (PADCC) was able to earmark six million hectares of supposedly “idle” lands for the production of sugarcane, coconut, cassava, jathropa, oil palm and other high-value export crops. Currently the PADCC is waiting word from the Saudi government that the latter will proceed with its US$238.6 million investment for the establishment and running of crop plantations for bananas, mangoes and pineapples and for aquaculture and halal food processing.

Global land grabbing is also being facilitated by international investors. In a 2009 report by the World Bank, it was said that 111 million hectares of agricultural lands were acquired by global investors; 75 percent of the lands were in Africa. In the United States, more than 25 percent of grain production was devoted to ethanol distilleries for auto fuel. This was equivalent to 119 million tons from a total of 416 million tons.

The same World Bank report said that 7.2 million hectares of land in Brazil has been devoted to jathropa for the last 25 years. Now, Brazil imports much of its food crops including patented seeds.

According to the PCFS, the biggest company of palm oil production in the world, leased 220,000 hectares in Liberia; it’s also targeting 300,000 hecates for palm oil plantations in Cameroon.

The Food First Institute for Food and Development recently reported that in Ghana, one million hectares of farmers formerly planted with sorghum and corn were converted to jathropa and palm oil plantations.

“Imperialism is a menace that must be stopped. The neo-liberal globalization policies deny land to farmers and we must all fight against them. The poor and working people of the world do not benefit from the projects of these TNCs even as the corporations insist otherwise. Food insecurity is widespread because of massive land conversion. To secure the future and protect the next generation, we have no choice but to engage imperialism and work towards ending it. To free farmers and to free humanity, imperialism has to die,” Ramos said.