You Are Here: Home → 2011 → July → 8 → The economic crisis, austerity measures, and resistance in Europe

The economic crisis, austerity measures, and resistance in Europe

Governments in Europe are responding to the world economic crisis by tightening control by the European Union and forcing an intensified implementation of neo-liberal measures to compete with the US. Hard-hit by these measures are the working people who are now rising up, conducting massive strikes and protest actions.

In recent months, the focus of the international community has been on southern African countries because of the widespread protests against unpopular governments and presidents strongly alleged to be backed by the United States. These uprisings are popularly recognized as manifestations of people’s strong disgust and discontent against deep-seated corruption in government and their failure to stop the continuously deteriorating quality of life.

The global economic crisis has severely affected the impoverished countries of the south, but according to Wim De Ceukelaire of human rights group Intal Belgium, Europe has also been hit hard and the effects have sent economies into a tailspin.

In presentation he made to the 4th International League of Peoples’ Struggles (ILPS), De Ceukelaire said that European governments are challenged to reinstate stability, particularly in the eurozone. He said the gap between the strong economies under the leadership of Germany and the weaker economies in southern and eastern Europe is increasing.

The eurozone is an economic and monetary union (EMU) of 17 European Union (EU) member states that have adopted the euro as their common currency. The eurozone currently consists of Austria, Belgium, Cyprus, Estonia, Finland, France, Germany, Greece, Ireland, Italy, Luxembourg, Malta, the Netherlands, Portugal, Slovakia, Slovenia, and Spain. Of the 10 EU member states outside the eurozone, seven states are obliged to join, once they fulfill the strict entrance requirements.

“How can an economic union and a common currency zone survive when Germany’s trade surplus is breaking records while Greece and Portugal are all but bankrupt? German capitalists do not feel like paying for a solution to problems of the Greeks or Portuguese,” he said.

According to reports, European President Herman Van Rompuy established a “task force” to look for solutions to the crisis, but it was German Chancellor Angela Merkel who held the pen.

“This is how a a proposal took shape during the European Summits of 2010 — they wanted to establish some kind of a “European Economic Government.” The solution they were providing was supposedly simple: everyone is supposed to follow the so-called “German model” of harsh neo-liberal economic governance. In Germany real wages went down by five percent in the past 20 years. Unemployment benefits are now a meager € 450 (US $644) after one year, that is if the individual beneficiary has sold his house at least. Poverty is also on the rise,” he said. 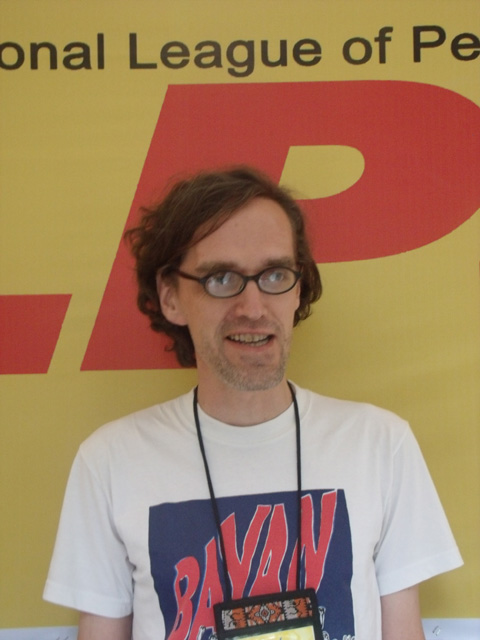 The global economic crisis has severely affected the impoverished countries of the South, but according to Wim De Ceukelaire of human rights group Intal Belgium, Europe has also been hit hard and the effects have sent economies into a tailspin. (Photo by Ina Allecco R. Silverio / bulatlat.com)

De Ceukelaire said that the concept of European economic governance was hatched and finalized all throughout the year 2010, with the Belgian government at the head of these efforts. He explained that during the 2011 Spring European Council, an EU Economic Governance pact was signed.

“The pact puts national governments under tight European surveillance. Instead of the European Commission making recommendations, it has been authorized to verify the concrete commitments of member states with regard to budgets, labor policies and pensions and to penalize them if they do not comply,” he said.

To make a point, De Ceukelaire cited the case of his own country.

“For instance, when one Belgian negotiator was asked during the prolonged government negotiations what his preferred coalition was, he answered that it didn’t really matter whether there would be a left or a right coalition. He said, and I quote: ‘There will be a government that will implement the dictates of the European Commission.”

The difference between the way European governments are run now and how they previously operated is stark: governments now have to submit their plans beforehand instead of waiting for the European Council’s judgment after the plans have been implemented.
“Plans are now evaluated by the Commission every June, and this judgment is ratified by the European Council before the end of the month. National governments are supposed to take these assessments into account when drawing up their budgets for the following year, and especially reforms of health care, labor market policy, education and pensions. Member countries that fail to obey can be punished with sanctions. The consequences of this kind of “economic governance” for social policies can be tremendous, as the examples of Greece, Ireland and Portugal are already demonstrating today,” he said.

Europe patterns economic plans after the US’

For all the new changes and arrangements in how the European governments are operating the business aspect of their administrations, the content of the economic programs, however, remains the same.

“The method might be new but the content is not. A general characteristic of the European plans is that the US serves as their model. This is no coincidence. For more than 60 years, the biggest US capitalists have ruled the world economy and manipulated it to serve their interests. In the meantime, the “emedies” the US adapted to stave off the crisis of overproduction have heavily influenced economic and financial policies in the European Union,” said De Ceukelaire.

The whole process of neo-liberal reforms in Europe accelerated in 1992 with the Maastricht Treaty. Formally known as the Treaty on European Union, it was signed in Maastricht, the Netherlands, on February 7, 1992. It represented a major step by its signatories toward European economic, political, and social and most importantly monetary integration. The treaty was signed by Belgium, Denmark, France, Germany, Greece, Ireland, Italy, Luxembourg, the Netherlands, Portugal, Spain, and the United Kingdom.

In anticipation of the single currency, national economies had to be streamlined. Issues of budget deficits and public debt were exposed and scrutinized. In many fields of business, finance and economic administration, the EU and its member states began copying US policies.