You Are Here: Home → 2011 → July → 11 → Progressive women from 20 countries vow to fight imperialist attacks against women

The International Women’s Alliance (IWA) is waging a fight against widespread hunger, poverty, deterioration of social welfare, unemployment, landlessness, human rights abuses, and militarization, on top of discrimination and different forms of violence against women. 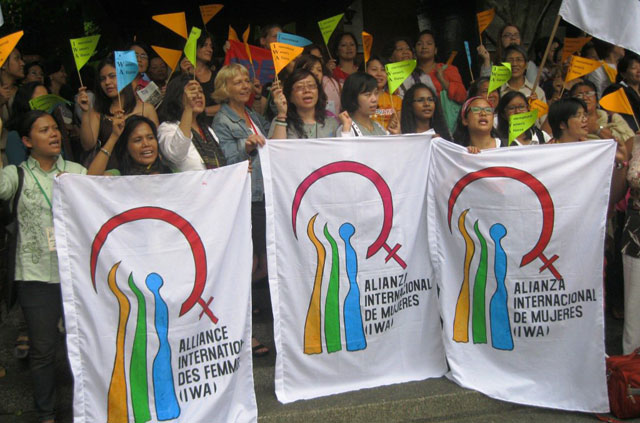 IWA is a global alliance that is anti-sexism, anti-racism, anti-patriarchy, anti-feudalism, anti-xenophobia and anti-homophobia grassroots women’s organizations, institutions, alliances, networks and individuals, committed to advancing social and national liberation. Delegates to the IWA pointed out that the global economic crisis made women and the peoples around the world suffer from landlessness, poverty and hunger. In particular, women belonging to the marginalized sectors are the ones most vulnerable to the crisis.

Mari Boti of Women of Diverse Origins and an award-winning film maker from Canada said that the first general assembly of IWA aims to further strengthen the collective voice and actions of women’s rights activists.

Sarojeni Rengam from Malaysia and a member of Asian Rural Women’s Coalition said that monopoly capitalism which resulted to global economic crisis has resulted to debts, unemployment, implementation of neo-liberal policies and huge cutbacks in funding or agriculture and social services such as education, health and housing. Land grabbing is also widespread in countries in Asia, Africa, Latin America and the Caribbean and the Middle East to which societies are ruled by landlords, warlords, and oligarchies which are supported by the imperialists.

Emime Ndihokubwayo, an African working for Pan-African organization called Acord said that in Africa, land grabbing is being pushed by multinationals and speculative investors, on one hand, and governments in the South on the other. “All these at the cost of poor rural women who are already vulnerable, and their land rights are further threatened. African women can attest to this land grabbing in the guise of “agricultural development”…[it] means nothing to them but the loss of land and lives.”

Meanwhile, women confront the issue of corporate mining. Lina Solano, a member of a grassroots organization El Frente de Mujeres Defensoras de la Pachamama or Women Defenders of Mother Earth said: “There is a serious social and environmental impact of mining which has not only affected our country but also Africa, Asia, including the Philippines.”

Large-scale mining in Ecuador by the multinational companies did not only cause problems to people’s health but also human rights violations. Solano, for one, has been slapped with fabricated criminal charges by one of the mining companies they had been protesting against.

Women in capitalist countries are not exempted from the impact of the economic crisis.

Monika Moorehead, an American and a member of Women Fight Back Network said that poor working women are also struggling in the United States. “There is a myth that what is going on with homelessness and the attacks on social services and budget cuts do not apply to the poor working women in the US. In fact, American women are suffering from austerity measures, budget cuts, union busting and attacks on collective bargaining.”

Moorehead added that the US government spends $10 to $12 million dollars for the war in Libya, Afghanistan, Pakistan and against the people of Palestine. “We demand that the money being wasted in this war should be spent for housing, education and healthcare.”

In Canada, Kelti Cameron of Ontario Community for Human Rights in the Philippines said that women in Canada also suffer from austerity measures. The Canadian government has also adopted Public-Private Partnership programs which privatized social services making it more expensive and unaffordable resulting to limited access of poor people.

IWA said the crisis of monopoly capitalism has also forced millions of women in exploited semi-colonial and semi-feudal countries to leave their homes to migrate to other countries in search of livelihood, making them vulnerable to trafficking and other forms of exploitation.

“Under the guise of state security, states carry out extra-judicial killings, and a host of human rights violations and demonization especially of Muslim people. Many people have died because of this war,” said Dr. Azra Sayeed, a Pakistan activist fighting for the rights of women and peasants in her country.

IWA was born out of the continuing struggles of women. It aims to unite and organize the world’s oppressed women to fight and resist the economic, political and military aggression of imperialism. The fight against widespread hunger, poverty, deterioration of social welfare, unemployment, landlessness, human rights abuses, and militarization, on top of discrimination and different forms of violence against women will be advanced to liberate women and the people.

“IWA is a unified force among all women to raise common issues and bring it to the global consciousness. I see IWA as a force that will hopefully contribute in helping and supporting our fight,” Solano said.

“It is a difficult struggle because of the black propaganda in the US, especially after the 9/11 attack, citizens are told to fear everyone,” said Moorehead.

Citing the Wisconsin protest where public sector workers protested the cut back in collective bargaining, Moorehead said that people around the world are enlightened. “They can show that they could win. The Wisconsin protest showed the unity between the public and the private sector, and women played a significant role in that struggle.”

Showing their unity and strength, IWA delegates raised their fists and chanted, “The women united will never be defeated!”, “Long live international solidarity” and “Down with imperialism!” IWA vowed to unite and fight reactionary currents as neoliberalism and neo-conservatism, racism, xenophobia and homophobia and patriarchy, and environmental and ecological degradation and exploitation.